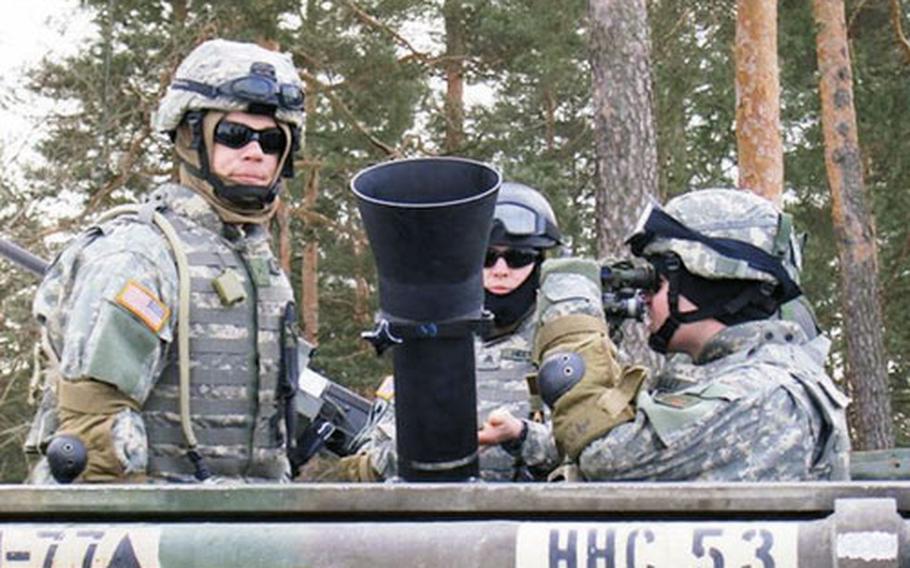 Members of the 1st Battalion, 77th Armored Regiment conduct a training exercise at Grafenwöhr last month. A recently completed study found 1,000 weak spots in the ground that could be dangerous for troops and equipment at the Army’s premier training area in Europe. (Seth Robson / S&S)

Fewer than 50 of those spots are in areas where vehicles maneuver, Army officials say.

The $115,000 hydrogeological report, by Nuremberg-based engineers Wolf Blumenthal Ingenieurburo, was ordered after the death of Spc. Jonathan Stehle, 24. He drowned Nov. 8, 2002, when his M1A1 Abrams tank fell into an unmarked water-filled hole at the training area.

An initial geological study released last year showed that Grafenw&#246;hr is riddled with sinkholes, some of which are expanding, even causing trees to tilt as the ground gives out beneath them.

&#8220;Absolute safety cannot be guaranteed anywhere on open terrain, in particular if this has a karst subsurface,&#8221; German engineers wrote in the initial report.

Karst structures evolve over millions of years as ground water eats through limestone, forming underground water reservoirs and even entire cave networks. As the water cuts deeper into the limestone, the earth&#8217;s surface gets weaker and sinkholes may appear.

The report comes out just months before the arrival of the 2nd Cavalry (Stryker) Regiment. The brigade is expected to maneuver its 19-ton wheeled vehicles around the training area later this year.

The armored personnel carriers will maneuver on the same areas used by the far heavier tanks, according to Col. Robert Shoemaker, chief of range control at Grafenw&#246;hr. M1A1 tanks weigh up to 70 tons.

Hazard map preparedThe engineers prepared a database that lists the dangerous areas on a computerized &#8220;potential hazard&#8221; map that can be used as a tool for range operations staff to secure the areas that could cause accidents.

The report recommends that the Army keep vehicles away from danger zones, monitor wetlands and add information about further incidents, such as miring of tanks, to the database. It also recommends units take environmental aspects such as rain, soil moisture and surface runoff into account when training at Grafenw&#246;hr.

Nate Whelan, U.S. Army Europe&#8217;s Integrated Training Area Management Program manager, whose office maintains training land in Europe, said the Army already knew about most of the things in the report and most of its recommendations had been implemented.

About 7,000 square meters of land near the accident site is off-limits, he added.

During a tour of the range last month, the accident site &#8212; in a small valley next to a wetland &#8212; was surrounded by red and yellow poles standing about 5 feet high. There are thousands of the poles all over training area to indicate areas off-limits to tactical vehicles.

Many parts of the training area are surrounded by impassable earth berms or ditches, and vast tracts of land are covered in thick pine forest, making it impossible for tanks or other tracked vehicles to enter.

According to Christian Luecke, deputy forestry director for Grafenw&#246;hr, half of the 92 square miles of training area is covered by trees.

&#8220;All of them were evaluated and, if the feature they pointed out had the potential to cause that kind of accident, it was staked off or remedial action was taken such as filling it with blast rock or putting rocks around it,&#8221; he said.

&#8220;This has been happening for 50 years &#8212; as long as the area has been used by U.S. forces,&#8221; said Shoemaker, who took command two weeks before the accident and was at the site while efforts were made to save Stehle.

Several of the report&#8217;s recommendations already had been acted on, Army officials say.

For example, a sinkhole field found listed near Range 301 was off-limits and units were already restricted to hard roads at the Engineers Qualification Range. The Nickelberg sinkhole was bermed off, and boulders stopped vehicles from getting near wetlands on the banks of the Frankenhohe River, which runs through the training area, Shoemaker said.

All units coming to the training area receive a map showing off-limit areas, including the accident site. Soldiers get field cards warning them to look out for areas with bent trees that might indicate depressions or sinkholes, he said.

Hundreds of staff who work in the training area look out for hazards, Shoemaker added.

In 2008, the Army will commission a follow-up survey to revisit the locations and make sure the data is still good, he said.