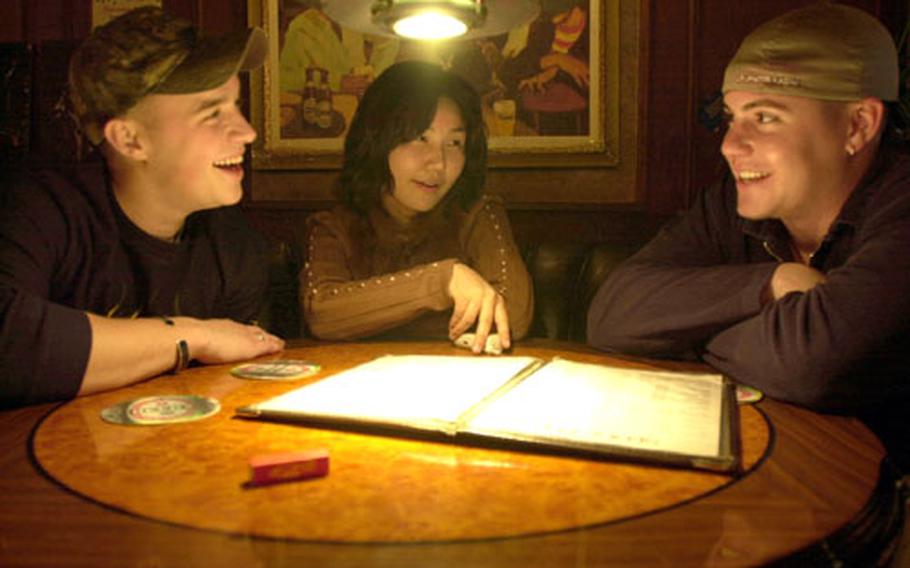 Where does your money go? (From left) Spc. Bryce Mahoney, Serena Lee and Spc. Jonathan Butts discuss dinner choices at a local pub in Itaewon, a section of Seoul, South Korea. The U.S. Army is conducting a survey to determine whether Cost of Living Allowance (COLA) is warranted for the region. (Greg L. Davis / S&S)

YONGSAN GARRISON, South Korea &#8212; Seoul, a thriving metropolis of 10 million people, is the world&#8217;s eighth-most expensive city, according to a January survey by The Economist magazine.

So how much do servicemembers get for a cost-of-living adjustment from the Defense Department?

About 280,000 servicemembers receive COLA at 600 overseas locations, costing U.S. taxpayers about $1 billion annually, according to the Defense Department&#8217;s per diem committee, which fixes the rate. The average payment is $297 per month, it said.

But within the next few weeks, the 175th Finance Command will post a survey on its Web site in hopes of getting a COLA here, said Col. Charles Kuyk, commander. If the per diem committee designates Seoul as eligible, servicemembers could see an extra cash boost by July, Kuyk said.

That committee determines through surveys, cost comparisons and exchange rates how much extra money servicemembers should get to equalize their cost of living compared with that in the United States, Kuyk said. Two surveys are used to gauge how much troops spend on the economy and the prices of those goods. DOD requires that a living-pattern survey be given every three years to a minimum of 150 people at each overseas location, gauging which stores sell the most goods and the percentage purchased from each one.

The last time U.S. Forces Korea submitted a survey was in 1997. A separate annual retail price survey &#8212; circulated in about 200 locations worldwide and covering roughly 160 goods and services &#8212; was last given in South Korea in 1999. It&#8217;s used to measure the prices of goods where people shop.

After a living pattern survey is completed, officials browse common places where servicemembers shop and record prices, Olsen said. Those prices are compared with prices in places such as the Post Exchange to determine whether soldiers should get a cost-of-living adjustment, Olsen said.

Getting no COLA costs servicemembers in Seoul some cash. A major with three dependents and 10 years in the service who lives off-post in Stuttgart would get $1,093 a month; in Tokyo, it would be $1,982.

In contrast, a relative salary comparison by homefair.com, a real estate consultant company, found one would need a salary of $50,212 in Stuttgart to maintain the same quality of living that a $100,000 salary in Seoul would bring.

Civilian Department of Defense employees in South Korea are luckier. They get what&#8217;s called a post allowance, based primarily on a comparison of the cost of goods at an overseas location and in Washington. If that difference is at least 3 percent, a post allowance is authorized.

For example, a civilian DOD employee with three dependents, living off post and making $50,000 a year, would garner about $117 a month in post allowance.

Officials hope to have 70 percent of accompanied servicemembers complete the survey in all areas of South Korea for all services, Kuyk said. Servicemembers who live off post also are targeted, he said.

Unaccompanied servicemembers are ineligible for the survey because their living conditions are different. Most live on post in barracks and have access to dining facilities, so their shopping patterns vary, Olsen said.

But they still would get 47 percent of the COLA earned by married servicemembers, Kuyk said.

The survey begins about March 31 and ends April 30. Results will be forwarded to the per diem committee by the end of May.