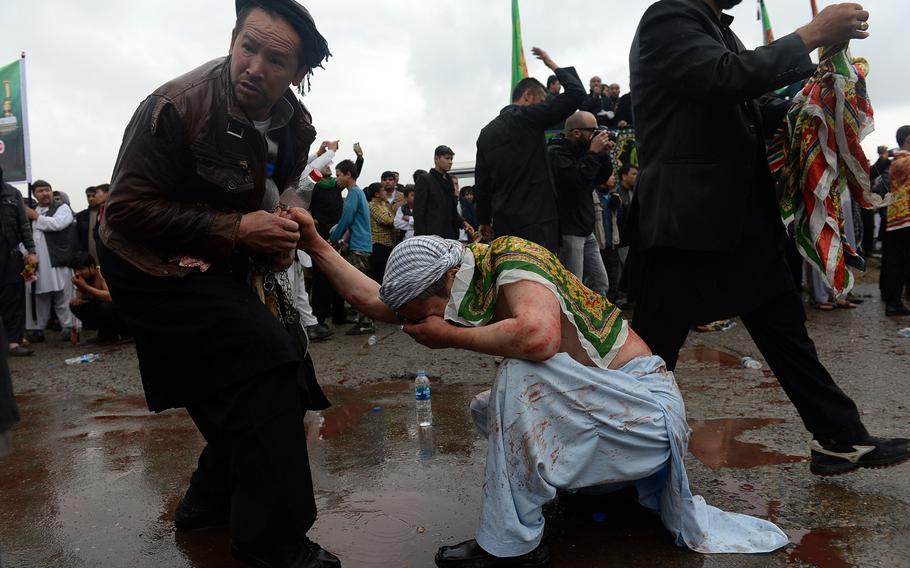 A blood-soaked worshipper cries after flagellating himself during an Ashoura procession in Kabul, Afghanistan, Saturday, Oct. 24, 2015. The day is one of the holiest holidays for Shiite Muslims, who mourn the death of the grandson of the Prophet Mohammed. (Josh Smith/Stars and Stripes)

KABUL, Afghanistan — Escalating violence and corruption have driven optimism and hope among Afghans to the lowest level in a decade, the Asia Foundation said in a survey published Tuesday.

For the first time since 2006, a majority of Afghans — 57 percent — say their country is headed in the wrong direction, the survey found, while 37 percent said the country was on the right course.

That’s a rapid reversal from last year’s survey, when 55 percent of Afghans were optimistic about the direction of the country. Faith in democracy has also ebbed, despite a presidential election last year that saw the first democratic change of government in the country’s history. The percentage of Afghans who are satisfied with how democracy works in their country hit an all-time low in 2015, 57 percent compared with 73 percent in 2014.

“This year witnessed major changes in national mood, reflecting rising concern over insecurity and a struggling economy,” Asia Foundation researchers said in the survey, which has examined Afghan views since 2004. “Our 2015 survey reflects Afghans’ understandable concerns about these challenges, and increased skepticism about the government’s ability to address them.”

Still, three-quarters of respondents said they are generally happy in their lives, and many reported improvements in some general services, such as water, education, and health care.

Security is the biggest problem in the country, respondents said, followed by unemployment and corruption. More Afghans than ever — fully two-thirds — fear for their personal safety, the survey found. Some areas of the country, such as the south and east, which have been particularly volatile, saw increases in concerns over security, while the western region, which has been relatvely calm, saw a decrease.

Fear of violence and crime is highest in rural areas, the survey found. Rural residents are twice as likely to report facing violence or crime than city dwellers.

The survey of nearly 10,000 Afghans was conducted in June and July of 2015, before the Taliban briefly captured the northern city of Kunduz in September — their first seizure of a major center since they were ousted from power in 2001. Since then, major protests have targeted the government for what is seen as its inadequate response to the war against the militants.

Optimism among Afghans peaked in 2013, ahead of a national election that many hoped would improve their situation, but a prolonged dispute over results of last year’s presidential vote left many Afghans disillusioned with politics. In addition, since international troops declared an end to their combat mission in the country, war has continued to rage, with casualties among security forces and civilians hitting all-time highs.

President Ashraf Ghani’s handling of the violence — as well as his difficulty in rooting out corruption and reviving a foundering economy — has prompted rising criticism.

Despite Ghani’s pledge to weed out corruption, nearly 90 percent of respondents said it is a problem in their daily lives, the highest share in a decade. More than half of Afghans said their employment opportunities are worse now than they were a year ago.

Support for the Taliban and other insurgent groups has fallen to a new low as the bloodshed continues. Twenty-eight percent of respondents said they had at least a little sympathy for militant groups, down from 56 percent in 2009.

“The results show increased skepticism in the government’s ability to effectively address these challenges,” Abdullah Ahmadzai, the Asia Foundation’s representative in Afghanistan, said in a statement. “The survey is also a clear signal to the international community and regional neighbors that steadiness, patience, and support are what’s needed as Afghanistan struggles to achieve peace and stability.”