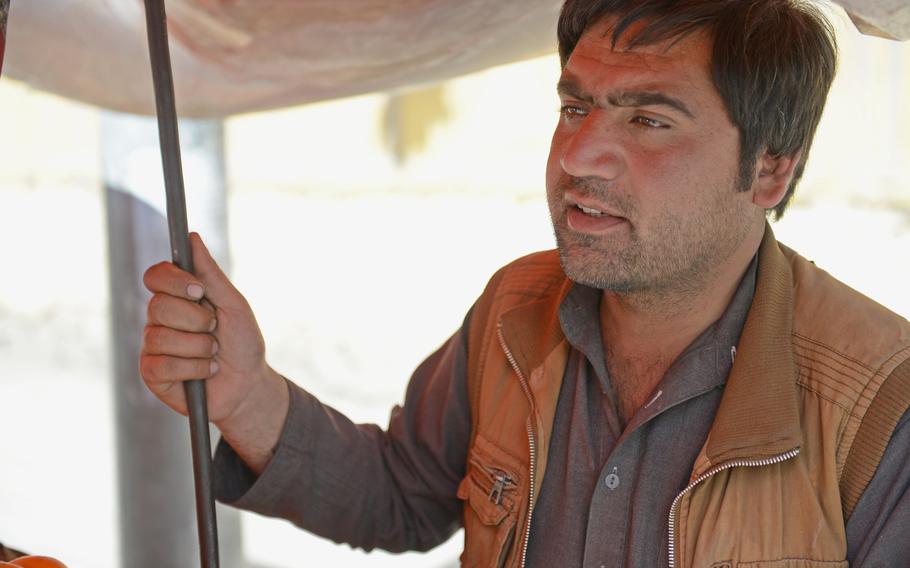 Mohammad Hakim, 28, says he voted in Afghanistan's last parliamentary election but won't vote in the next unless the government wins the trust of the people. He works as a fruit vendor. (Phillip Walter Wellman/Stars and Stripes)

Mohammad Hakim, 28, says he voted in Afghanistan's last parliamentary election but won't vote in the next unless the government wins the trust of the people. He works as a fruit vendor. (Phillip Walter Wellman/Stars and Stripes) 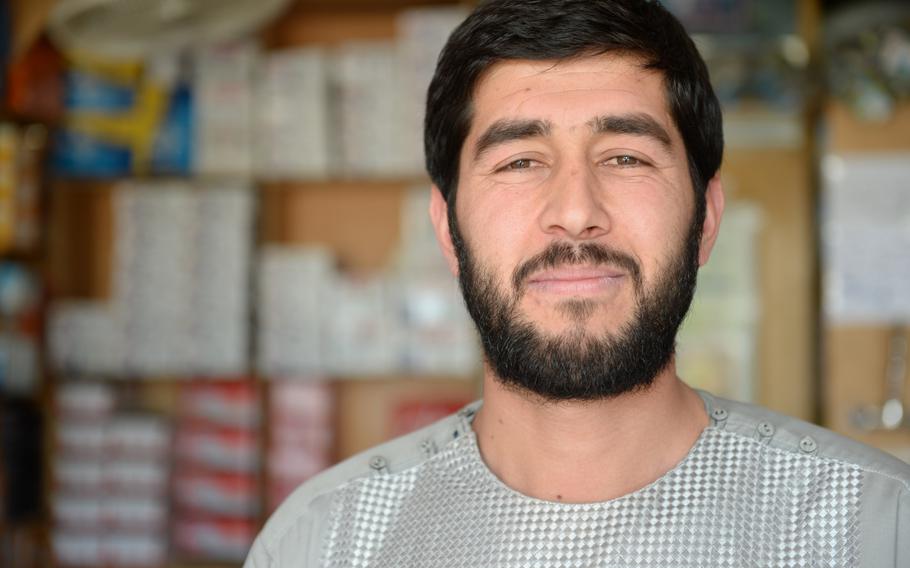 Javed Noori, 26, says Afghan lawmakers are out of touch with citizens. The college graduate works in a Kabul shop that sells sinks. He expressed regret about voting in the last parliamentary election and said he wouldn't vote in the next one in October. His view about the coming election was shared by most respondents to a poll released Monday, April 11, 2016. (Phillip Walter Wellman/Stars and Stripes) 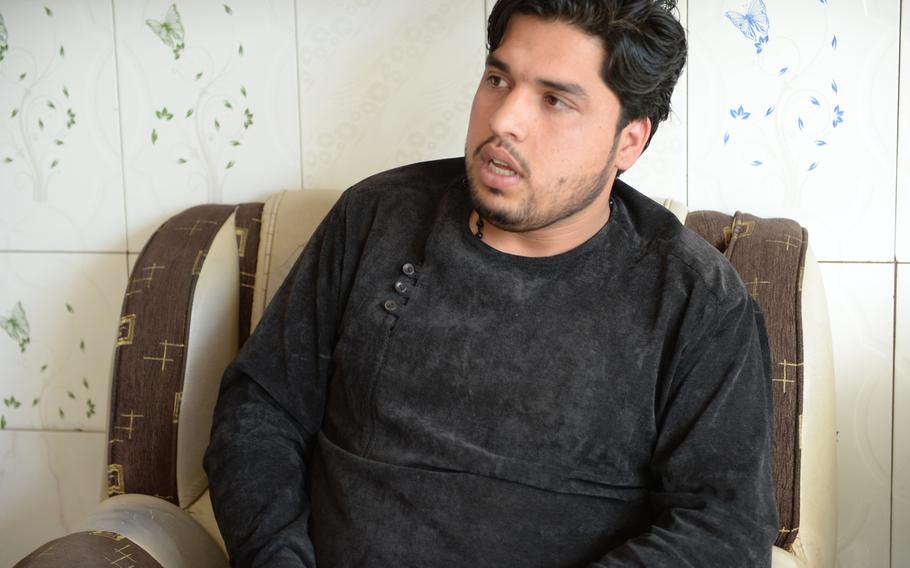 Faisal Hashimi, 22, who sells tiles in downtown Kabul, says he might vote in Afghanistan's parliamentary election if "criminals" were prevented from running for office. He spoke to Stars and Stripes on Monday, April 11, 2016. (Phillip Walter Wellman/Stars and Stripes) 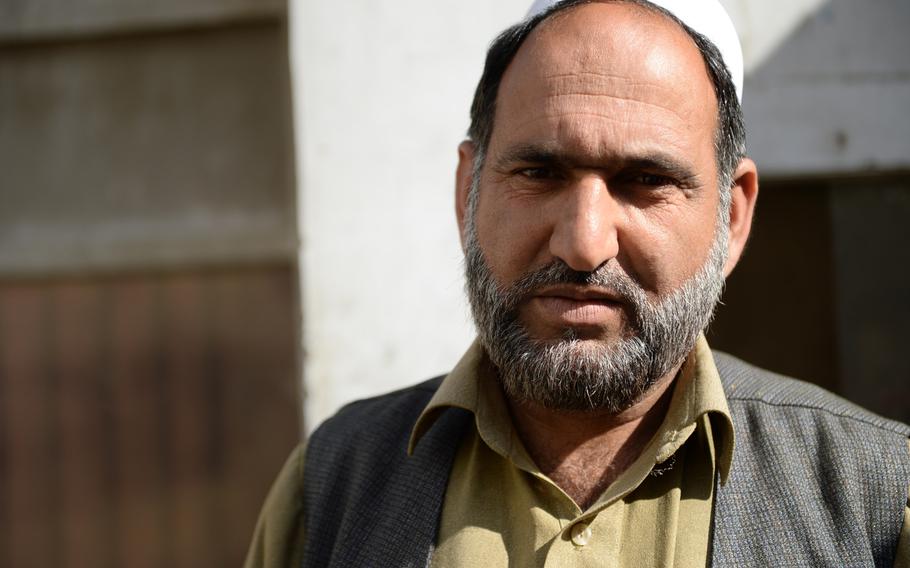 Ziarat Gul, 40, said nothing has changed since he voted in the last parliamentary election in Afghanistan. "We are still having the same problems of insecurity, poor economy, joblessness and poverty," he said on Monday, April 11, 2016. (Phillip Walter Wellman/Stars and Stripes)

KABUL, Afghanistan — Most people who voted in Afghanistan’s last parliamentary election in 2010 will not take part in the next election scheduled for October because they don’t believe in the system, according to a survey released earlier this week by a local development organization.

The poll by the FOCUS group found that 52 percent of previous voters would not cast their ballots this time. Their main reasons for abstaining included the belief that the parliament does not represent the people, the feeling that most parliamentarians are corrupt, and a lack of confidence in the electoral system.

“It’s not really surprising for us because, based on the last presidential election, people were disheartened, and this is what we expected,” said FOCUS President and Chief Executive Najibullah Azad.

The 2014 presidential election was marred by allegations of fraud and a bitter dispute between the two leading candidates, Ashraf Ghani and Abdullah Abdullah. Under a U.S.-brokered deal, Ghani became president of a power-sharing government in which Abdullah serves as chief executive officer.

FOCUS’ poll of more than 10,500 people from across the country was conducted between August 2015 and February 2016. It excluded 41 districts considered too insecure for face-to-face interviews. The vast majority of those interviewed were male — 88.67 percent versus 11.33 percent female.

The organization gave no margin of error. To ensure accuracy and eliminate fraud, the interviews were recorded and photographed.

Azad said the survey results could prompt the government to make changes to regain voters’ trust.

“The government really needs to think of their people,” he said.

But many Afghans, like Mohammad Hakim, 28, who voted in the last parliamentary election and works as a streetside fruit vendor, say it will take a lot for the government to regain the people’s trust.

“I was hopeful. I thought the lawmakers would think about the goodwill of the country, but things are going in the opposite direction so far,” he said. “Not only me, but many other people are not going to vote this time. The government needs to win the trust of the people by doing whatever they can do because no one believes in the election right now.”

In the 2010 parliamentary election, about 4.6 million of 9.2 million eligible voters turned out. In the 2014 presidential election, turnout was more than 8 million.

Transforming Afghanistan into a stable democracy has been at the core of a 15-year state-building project in which, according to the Special Inspector General for Afghanistan Reconstruction, the United States alone has spent more than $113 billion. The Oct. 15 elections will choose members of the Wolasi Jirga, or the House of the People. It is the lower house of the bicameral National Assembly and the country’s main lawmaking body.

The vote was supposed to have been conducted before June 2015, when parliament’s five-year term expired, but it was postponed because of security concerns and disputes over how to ensure a fair vote after 2014’s highly disputed presidential election.

Last year, Ghani extended parliament’s mandate and agreed on electoral reforms as a condition for future elections. But progress has been slow, as Ghani and Abdullah have disagreed over who should lead a reform commission.

The government turmoil has taken a heavy toll on the economy and is viewed as undermining the fight against insurgents. Combined with the transition by international forces from a combat to a train-and-assist role, it has enabled the Taliban to claim more territory than at any other time since the U.S.-led invasion in 2001 ousted them from power.

Javed Noori, 26, who works in a Kabul shop that sells sinks, said lawmakers are out of touch with citizens.

“Right now the parliament (is) not working with the people,” he said. “Society is getting worse. The government is not for us. It is just for people who have money and power. I regret voting in the last election and won’t vote in October.”

According to the FOCUS poll, only 4 percent of those surveyed said parliamentarians had taken into account the interests of their provinces and the country while making laws. Less than 4 percent believed the lawmakers were their “true representatives” who passed their issues to higher levels of government. Nearly 37 percent said they believed their parliamentarians were involved in corruption.

“There is always corruption in the election, ballot stuffing and bad people run for seats,” said Faisal Hashimi 22, who sells tiles in downtown Kabul. “If they make strict rules for the candidates that criminals cannot run, I might vote.”

“I did vote for a better Afghanistan, for a better future, but nothing has been changed,” said the security guard from the capital’s Khak-e-Jabbar district.

In his view, security concerns will prevent many people across the country from voting in October. The FOCUS poll found that less than 8 percent of respondents cited insecurity as a reason for not voting.

FOCUS’ Azad was optimistic that results of the FOCUS poll could prompt reforms before the elections.

“The basic changes people want won’t take long to implement, but we need the changes,” he said. “Voters were blind before. They want the new generation to have glasses.”