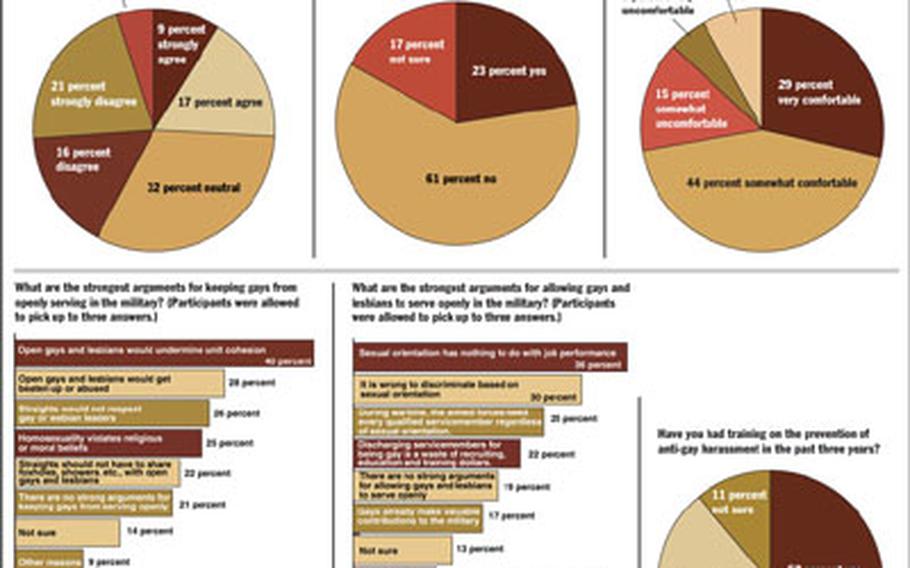 TOKYO &#8212; Nearly one in four servicemembers knows definitively that a member of his or her unit is gay or lesbian, according to a survey released last month.

Twenty-three percent of the 545 servicemembers surveyed online over three days in October said they knew &#8220;for certain&#8221; they were serving with someone who is gay, according to a Zogby International poll. The poll was commissioned by and designed in conjunction with the Michael D. Palm Center, a research institute at the University of California, Santa Barbara, that was formerly the Center for the Study of Sexual Minorities in the Military.

When survey respondents were asked how they knew the person&#8217;s sexual orientation, 59 percent said they had been told by that individual, according to the poll.

The survey, released last month, was one piece of evidence former Joint Chiefs Chairman Gen. John Shalikashvili used this week in calling for a new discussion about the 1993 policy that prohibits gays from openly serving in the military.

Shalikashvili, a retired Army general, headed the Joint Chiefs when the &#8220;don&#8217;t ask, don&#8217;t tell&#8221; policy was created. Back then he supported it. This week, he called on leaders to revisit the policy in part because Zogby&#8217;s poll, released Dec. 19, found that three-quarters of those surveyed &#8220;said they were comfortable interacting with gay people,&#8221; he wrote in an opinion piece in the Jan. 2 edition of The New York Times.

The online poll targeted active-duty, veterans, reservists and Guard members from every military branch who are deployed to or recently returned from wartime missions in Iraq and Afghanistan, according to Dr. Aaron Belkin, a political science professor at Santa Barbara and head of the Palm Center.

Belkin said he believed the finding that one in four servicemembers knows of a gay colleague shows the current policy isn&#8217;t working.

The questions ranged from the servicemembers&#8217; personal feelings about the presence of gay people in any setting, to the effect an openly gay servicemember might have on unit morale, to the frequency of private showers while in combat conditions.

The survey also allowed participants to comment on their views on the morality of both homosexuality and the military&#8217;s ban of openly gay members.

On one hand, 25 percent of those surveyed said homosexuality violates their religious or moral beliefs. On the other, 30 percent said it is wrong of the Pentagon to discriminate against servicemembers based on sexual orientation.

Overall, the results found that those who believed they knew someone gay in their unit were more likely to be tolerant of the idea of openly gay servicemembers, as were less-experienced military members and women. Longer-serving servicemembers and officers, as well as all men surveyed, were less likely to be comfortable serving side-by-side with gay or lesbian people.

The current policy states that gays and lesbians may serve in the military only if they keep their sexual orientation private. Commanders may not ask, and gay servicemembers may not tell.

Over the years, thousands have been dismissed under this policy. Two dozen countries, including U.S. allies such as Great Britain and Israel, allow for openly gay members.

The survey respondents also gave high marks to their overall training, and the training of their leaders. Eighty-two percent felt very well or well trained for their wartime mission. Four in five respondents said they felt their noncommissioned officers were good leaders.