Surveillance at its highest level 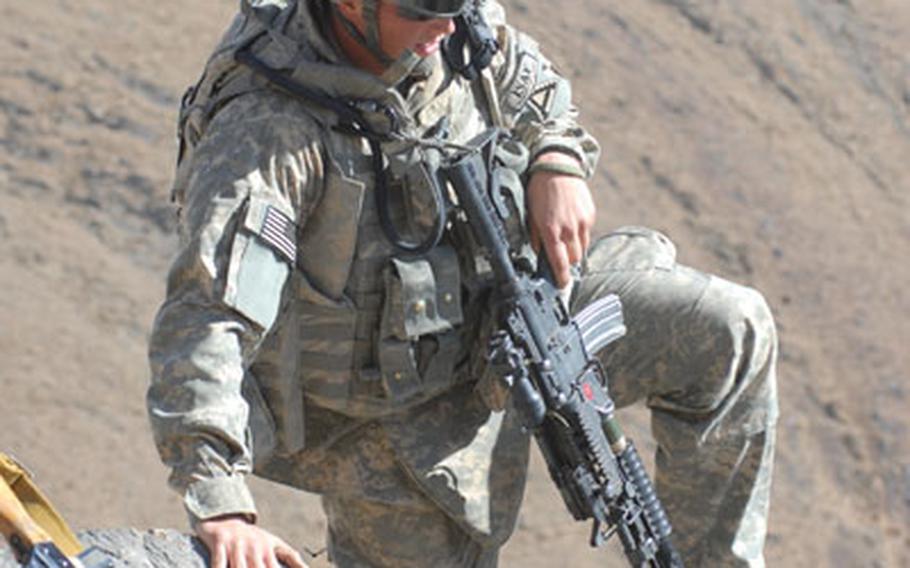 Pvt. James West, 21, of Erie, Pa. reaches the top of a steep cliff during a mountain climb in the Mizan district of southern Afghanistan&#39;s Zabul province on Friday. (By Seth Robson / S&S)

Pvt. James West, 21, of Erie, Pa. reaches the top of a steep cliff during a mountain climb in the Mizan district of southern Afghanistan&#39;s Zabul province on Friday. (By Seth Robson / S&S) 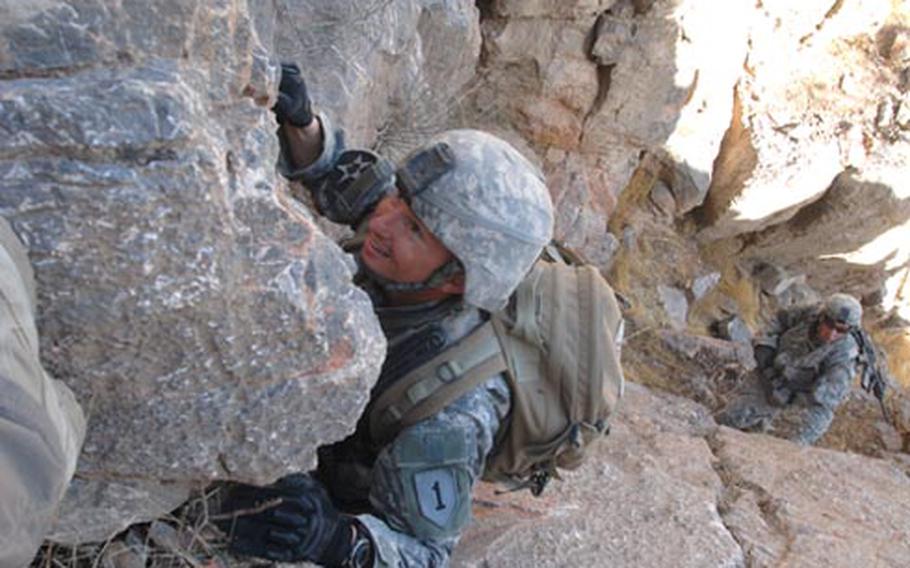 Capt. Jason Cowden, 28, of Cincinnati looks for a handhold during a recent climb in the Mizan district in southern Afghanistan&#39;s Zabul province. (Seth Robson / S&S) An Afghan soldier searches a goat herder during a mountain climb in the Mizan district of southern Afghanistan&#39;s Zabul province on Friday. (Seth Robson / S&S)

MIZAN DISTRICT, Afghanistan &#8212; U.S. and Afghan soldiers recently clung to the rocks near the summit of a jagged peak in southern Afghanistan.

The soldiers on the mountain were from 1st Platoon, Company A, 1st Battalion, 4th Infantry Regiment along with a pair of U.S. embedded tactical trainers and a platoon of 1st Candat, 2nd Battalion, 205th Corps troops with the Afghan National Army.

The Hohenfels, Germany- based U.S. troops conduct regular patrols in the mountains surrounding the Mizan River Valley in south Afghanistan&#8217;s Zabul province to deter Taliban &#8220;mountain guards&#8221; who, in the past, have taken to high ground to spy on the outpost, Forward Operating Base Mizan.

On one recent patrol the soldiers spotted a pair of Taliban on a summit. They fired on the enemy, called in mortars and gave chase, but lost them in a gully.

The path up the mountain started with a series of switchback goat paths. But the going got really tough several hundred feet from the summit, where the soldiers were forced to scale sheer cliffs. Up here the smallest mistake could send a man plummeting to a painful death on the rocks far below.

But after a number of missions, he&#8217;s getting used to it and now keeps pace with the Afghan troops who clamber up rocks like Spiderman.

Afghan interpreter Tariq Kaihan, 21, of Kabul, who followed Gray up the hill, said the ANA soldiers are mostly from provincial areas in the country and many grew up herding animals on mountains.

&#8220;The rocks are really loose and you have to be aware of where you are in this country, but when we got to the top there was a real sense of accomplishment,&#8221; he said.

Not all the U.S. soldiers were delighted with the rocks. Spc. Jonathan Stein, 24, of LeRoy, N.Y., was on his first climb in Afghanistan.