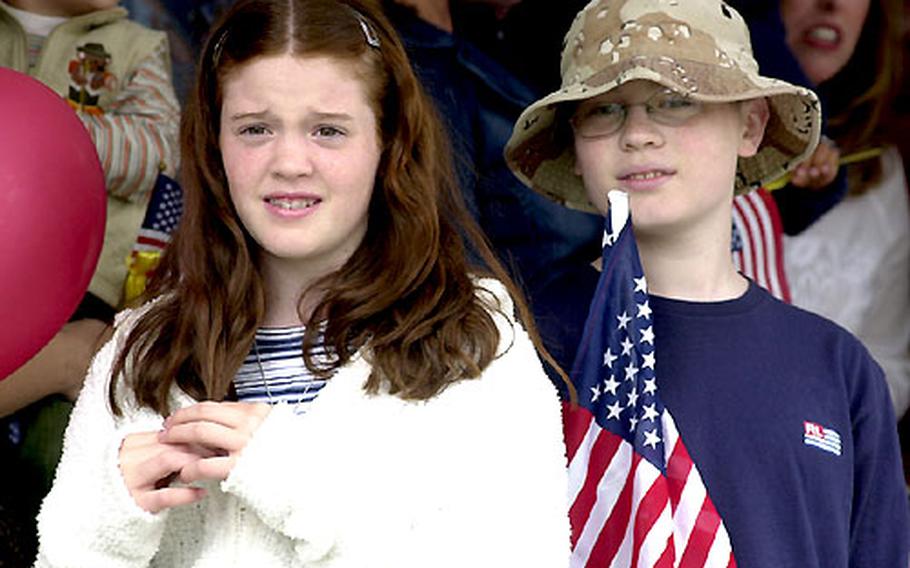 Nicolette, 10 , and Kyle, 12, look to see if they can see their dad. Chief Warrant Officer 3 Derek Muller, get off a bus at Wiesbaden Army Airfield, Germany. (Michael Abrams / S&S)

Nicolette, 10 , and Kyle, 12, look to see if they can see their dad. Chief Warrant Officer 3 Derek Muller, get off a bus at Wiesbaden Army Airfield, Germany. (Michael Abrams / S&S) 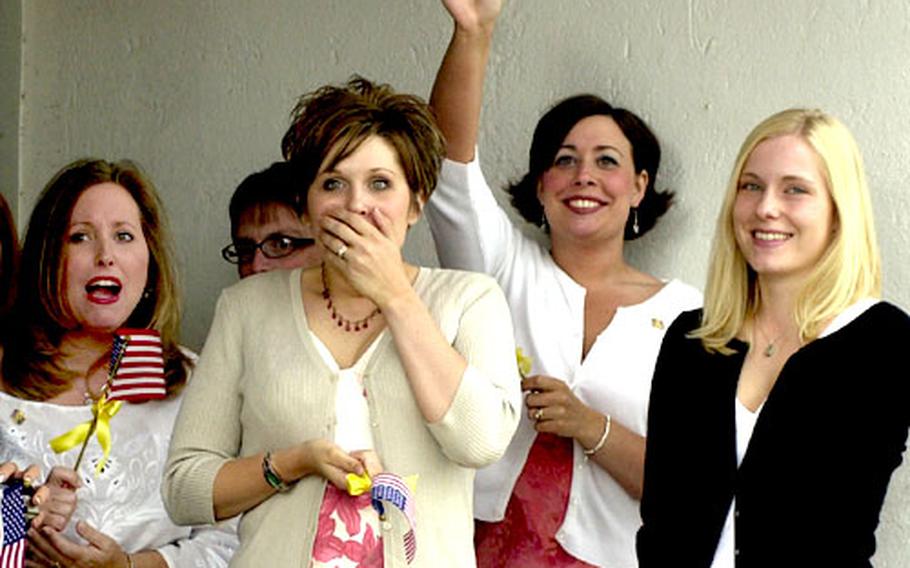 Wives of members of the 159th Medical Company, out of Wiesbaden, Germany, react as their husbands get off the bus that brought them from Ramstein Air Base upon their return from Operation Iraqi Freedom. (Michael Abrams / S&S) WIESBADEN, Germany &#8212; As a slight drizzle became steadily harder, a bus pulled into the far corner of a parking lot at the Wiesbaden Army Airfield.

As approximately 20 soldiers in tan flight suits and BDUs stepped off the bus, the crowd of women and children rushed to the edge of the parking lot.

Once in formation, the soldiers marched only feet away from their family members and halted.

Then within minutes, they were in one another&#8217;s embrace.

After seven months, and in support of three operations, the Army pilots and medics of the 159th Medical Company, 421st Medical Evacuation Battalion were home.

The soldiers initially deployed in October in support of Operation Desert Spring in Kuwait, then later supported Operation Enduring Freedom, and ended their tour with Operation Iraqi Freedom.

After about a month of rumors, family members ended up finding out their troops would be home just 90 minutes before their arrival.

Others said they had plans for their husband&#8217;s arrival &#8212; including some unmentionables.

&#8220;All of us are going to be taking some block leave, so we can really spend some time together,&#8221; Aimee Stoddard said. She and her husband, Sgt. 1st Class Michael Stoddard, are planning a trip to Las Vegas and Oklahoma.

Single soldiers were not left out, as other soldiers met up with old friends.

Ford said she wrote to her pal a couple of times, but her letters still had not arrived due to the slow mail process.

While the husbands were away, the wives got together and made life easier by going to dinner together or having family movie nights. That helped ease the anxiety for everyone.

She wowed her father, Chief Warrant Officer 3 Derek Muller, by learning some Spanish while he was away and she proved it by telling him he was a hero in Spanish.

The 421st still has about 200 soldiers deployed in support of Operation Iraqi Freedom, according to Patricia Simoes, a 221st Base Support Battalion spokeswoman. Most of the 421st deployed about a month ago.