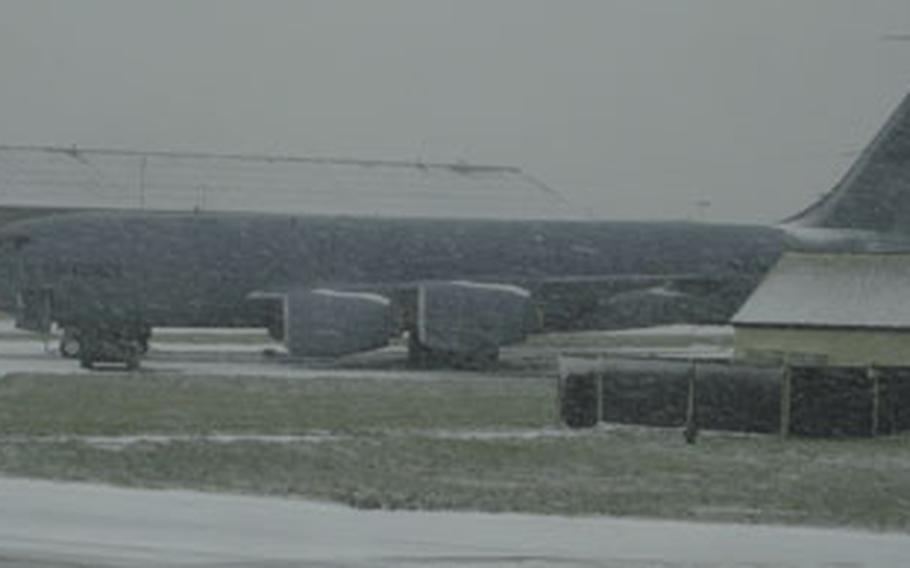 Capt. Colin Henderson maneuvers a KC-135 through the snow at RAF Mildenhall Thursday morning after returning from a sudden refueling mission over the U.K. (Photo courtesy of U.S. Air Force)

Capt. Colin Henderson arrived on base late Wednesday night for his first flight as an aircraft commander. It was scheduled to be a routine refueling mission over the Mediterranean Sea.

But events on the ground in Iraq and severe weather in England conspired to make the next 12 hours anything but routine for the 26-year-old Colorado native.

First, the refueling flight over the Mediterranean was aborted. Then, word came down suddenly in the middle of the night that his three-man crew was being tasked with a new, high-priority mission.

Mississippi Air National Guard spokesman Lt. Col. David Buck said the mission was unusual in that the majority of its C-17 flights are from Balad to Landstuhl Regional Medical Center in Germany.

Henderson and his crew, co-pilot 1st Lt. John Cramer and boom operator Tech. Sgt. RaileR Cantrell, as well as airmen from the 100th Maintenance Squadron, had to hustle to prep the KC-135 Stratotanker and perform the preflight requirements that normally unfold over 24 hours.

&#8220;The maintainers and my crew worked unbelievably fast because we realized how critical this mission was,&#8221; Henderson said. &#8220;We basically planned it from scratch.&#8221;

The KC-135 launched at about 6:30 a.m. and rendezvoused with the C-17 about 30 minutes later high above the England-Scotland border. The two planes continued toward the United States as the Stratotanker offloaded 16,200 gallons of fuel in about 30 minutes.

As the C-17 flew on to the States, the KC-135 returned to RAF Mildenhall just as a blinding snowstorm descended on the region.

A few nervous slides on the slick runway aside, the aircraft landed without incident and news soon spread about the 100th Operations Group&#8217;s unique mission.

In addition to the pride in the successful mission &#8212; Buck said the C-17 arrived in Maryland shortly before 3 p.m. GMT &#8212; Henderson said it&#8217;s also been an experience that brought him closer to the perils of the war in Iraq.

&#8220;But then I thought to myself after we landed that I get to go home today while the guys in the back of that plane are fighting for their lives. It was sobering.&#8221;