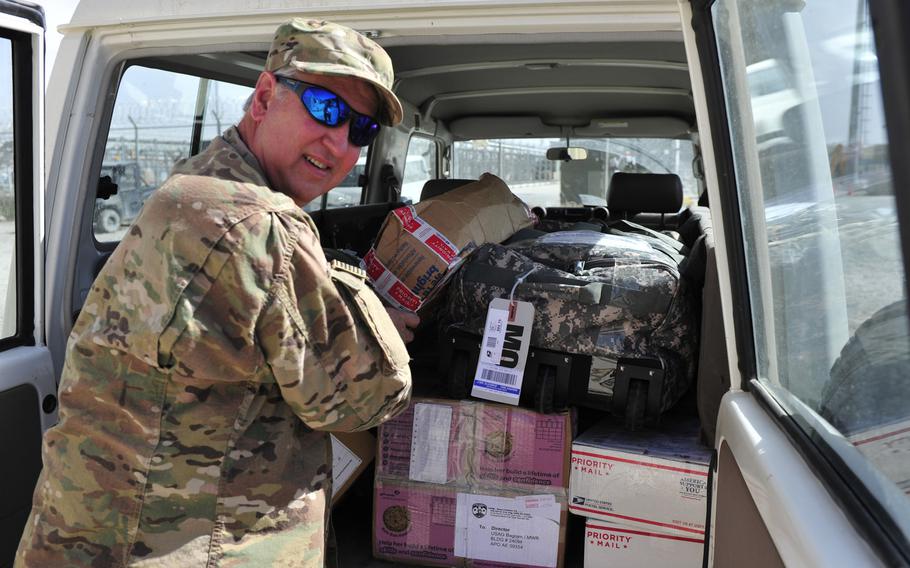 In a 2016 file photo, Eric Longenbach, a human resources specialist with the Bagram Support Group, picks up the mail as part of his additional duties. Longenbach volunteered with the Defense Department's Civilian Expeditionary Workforce to do a tour in Afghanistan. The military is struggling to convince civilians to work in Afghanistan, according to a memo issued by Defense Secretary Jim Mattis. (Bob Harrison/DOD)

In a 2016 file photo, Eric Longenbach, a human resources specialist with the Bagram Support Group, picks up the mail as part of his additional duties. Longenbach volunteered with the Defense Department's Civilian Expeditionary Workforce to do a tour in Afghanistan. The military is struggling to convince civilians to work in Afghanistan, according to a memo issued by Defense Secretary Jim Mattis. (Bob Harrison/DOD) 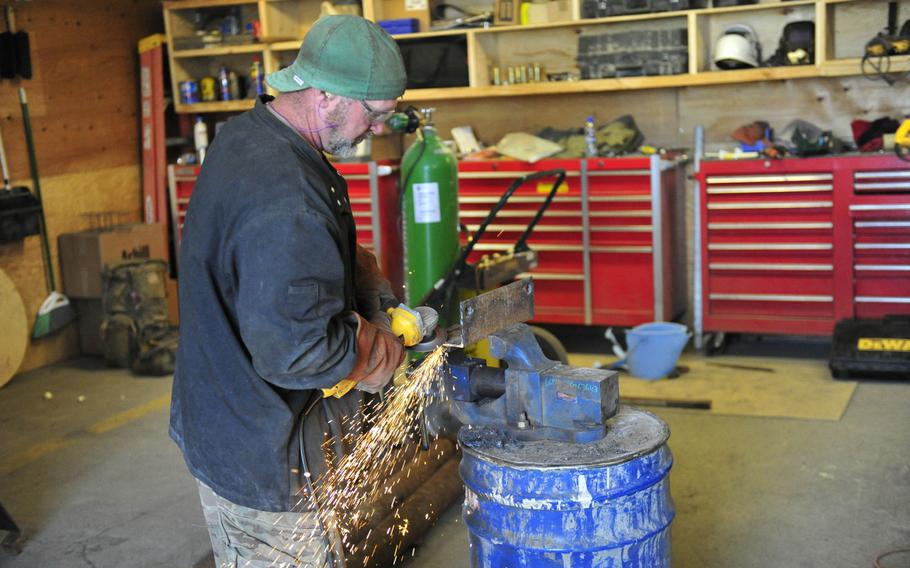 In a 2016 file photo, William 'Kent' Tadlock, a construction inspector and welder for the Bagram Support Grouppublic works department, prepares a piece of angle iron needed for repairs on a facility at Bagram. Tadlock is a U.S. Air Force civilian from Ellsworth Air Force Base, South Dakota, who volunteered to deploy to Afghanistan. ( Bob Harrison/DOD)

The Pentagon is preparing for a one-time surge of civilian employees to Afghanistan to eliminate a shortage of nonmilitary personnel that officials say could jeopardize efforts to secure the country and assist its embattled government.

Less than 70 percent of positions for DOD civilians are filled in Afghanistan – and that number is trending downward, Secretary Jim Mattis said in a June 29 memo. The employment of civilians is seen as crucial because it frees up servicemembers from support roles and enables them to focus on the military mission.

“We are at a critical point in Afghanistan — moving forward in stabilizing operations and building Afghan ministerial capacity — but continued progress requires maximum fill of validated civilian positions,” Mattis said.

Mattis called for an immediate “one-time surge” of expeditionary civilians, which the Pentagon uses partly to reduce reliance on contractors and lower the deployment burden for servicemembers.

The DOD began efforts to send its civilians to war zones in 2008 as a result of public concern over the use of private contractors in Iraq and Afghanistan. In Afghanistan, they fill support roles and serve as advisers to security ministries.

The Pentagon will shift its current ad hoc volunteer process to a system in which each component will be assigned requirements to fill, the memo said. The new rules will apply beginning Oct. 1.

The various components of the military, including its combatant commands and agencies, will be required to maintain a pool of civilians who are able to deploy.

Options to fill these requirements, Mattis said in the memo, include extending the terms of civilians already in the country, speeding up the process for those waiting to deploy, and temporarily deploying civilians with certain skills for short-term stints.

The new system will allow the military greater predictability, so that leaders can seek volunteers or establish plans to hire new employees, Pentagon spokeswoman Rebecca Rebarich said in an email.

“The program change recognizes the long-term need and importance of DOD civilian support to uniformed personnel in expeditionary missions, such as Afghanistan,” Rebarich said. “This DOD civilian support is an enduring requirement and one that requires advance planning to be successful. That is the purpose of the change.”

Every effort will be made to reach these requirements on a voluntary basis, although the memo noted management has the long-standing authority to direct assignments for civilian employees, including deployments.

There is no intent or plan to implement involuntary civilian deployments, Rebarich said.

Given existing shortages, Mattis said he expects the transition to the new system over the next few months to be “especially challenging.”

Looking for volunteers DOD has long struggled to find enough civilians willing or allowed to deploy to war zones because of a lack of direction on how to treat them downrange, a 2016 report by the Rand Corp. found.

“There’s really no career incentives to deploy and actually there are career disincentives,” Molly Dunigan, lead author of the report, told Stars and Stripes.

If the military wants more civilians to volunteer to go downrange, it will need to provide additional incentives such as awards and recognition, said Dunigan, who is a senior political scientist at Rand.

The new system, Dunigan said, could provide better support for civilian employees than what exists now.

Expeditionary civilians in Afghanistan serve technical roles such as logistics specialists, construction workers, security personnel and computer management, according to a 2017 DOD statement. The intelligence community maintains a separate program for deploying its civilian workforce.

Military personnel are considered generalists, while civilians can specialize in one field, said Preston Butler, a retired Army officer who worked with DOD civilians and now handles military contracts in Saudi Arabia for a private contractor.

“Civilians give stability, while the military personnel are moving around all the time,” Butler said. “They’re going to be the most knowledgeable because that’s all they’re there to do.”

America’s long-running war in Afghanistan has stretched the capabilities of its armed forces, leading to efforts beginning in 2008 to deploy civilian volunteers. By December 2011, there were nearly 3,000 serving in Afghanistan.

DOD civilians primarily deploy to bases on yearlong contracts under U.S. Central Command, which covers the Middle East and Afghanistan.

As of September 2017, there were still 1,200 appropriated fund civilians in Afghanistan, according to the Defense Manpower Data System’s online data.

These civilians needed permission from their management to leave their current jobs to work to Afghanistan, the Rand report said.

Often, employers couldn’t hire a temporary employee to work during a civilian’s deployment. Interviews showed bosses and co-workers would often get mad at the civilian deploying, Dunigan said.

An official with Special Operations Command told Rand that “high-performing people were not let go by the parent organization.”

Meanwhile, civilians said they were risking their career progression by taking a year to leave their jobs, the report said.

Ronald D. Godsy, a DOD civilian in Saudi Arabia, said going overseas could help a person’s career – but that depends on how a future hiring board views overseas service.

“In my experience, there are many civil servants who have never been overseas and don’t understand the additional experience gained from an overseas assignment, and won’t necessarily view that experience favorably,” Godsy said.