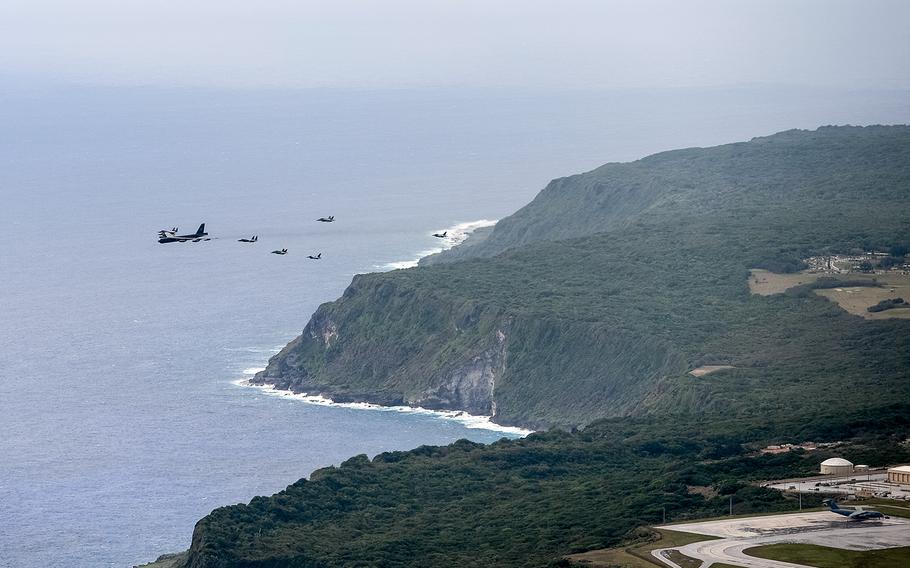 The Air Force is investigating whether any of the 35 airmen who tested positive for coronavirus in less than two weeks at Guam’s Andersen Air Force Base violated mandatory protection measures, a general said Monday.

All 35 belong to the same unit whose members arrived on the island May 25, according to a statement attributed to Brig. Gen. Gentry Boswell, commander of Andersen’s 36th Wing. Base health authorities discovered the unit’s first virus case June 12 and had tested all its members by Saturday.

“All military members are subject to the established public health emergency protocols,” Boswell said. “If the ensuing investigation determines that members did not follow these directives in a disciplined manner, they will be held accountable for their actions under the Uniform Code of Military Justice.”

Boswell did not identify the unit, citing concern for operational security.

The group had been staying at the Guam Reef Hotel in Tumon, the island’s main entertainment and shopping district, until the first case was discovered, according to an Air Force statement Wednesday. They were then moved to base lodging.

“Our primary focus is to care for these airmen and ensure the safety of both our military and civilian community,” Boswell said in the statement. “We have and will continue to work with the governor and Guam Public Health as we move forward.”

Though it is unclear whether the airmen contracted the coronavirus on Guam or at a previous location, “preliminary evidence in a public health investigation revealed the possibility that some of these members may not have adhered to Andersen and local Public Health directives,” Boswell said.

Military bases on Guam have been under multiple restrictions — including a ban on nonessential activities — since entering Health Protection Condition-Charlie in March. Charlie indicates sustained transmission of a disease.

Another two airmen not associated with the incoming unit also tested positive Saturday at Andersen, according to Boswell’s statement.

The pair arrived April 9 as part of the medical response to a major coronavirus outbreak on the aircraft carrier USS Theodore Roosevelt, but “did not have contact with the unit lodged at Guam Reef and the cases are unrelated,” the announcement said.

The Roosevelt diverted to Naval Base Guam mid-patrol on March 26 after several sailors contracted coronavirus. The ship stayed in port more than two months as it tested, isolated and treated its sailors. More than 1,150 of them ultimately tested positive for the virus; one sailor died. The Roosevelt left Guam on June 8.

The recent infections at Andersen surged the total number of coronavirus cases among service members on Guam from five to 42, according to a Guam Joint Information Center statement Monday. To date, 180 civilian Guam residents have also tested positive for coronavirus on the island.

“Despite this setback, Andersen AFB remains 100% operational and is able to execute all of its assigned missions,” Boswell said in the announcement. “The joint team that comprises Team Andersen remain poised and ready to fulfill our mission to maintain a free and open Indo-Pacific region and provide security for the territory of Guam.”