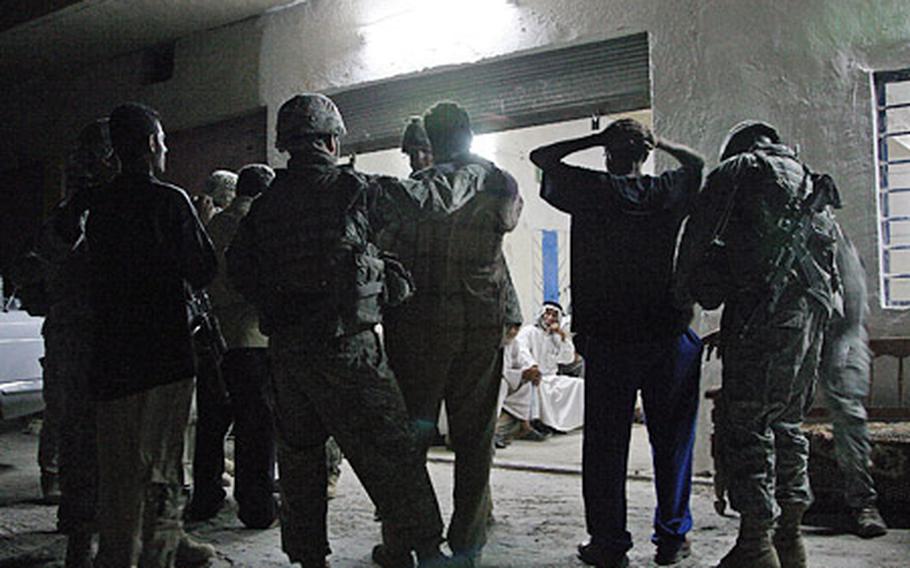 Click or scroll to the bottom of the page to view more photos. ()

FORWARD OPERATING BASE HAMMER, Iraq &#8212; The raid went down like clockwork.

Within two hours of receiving a tip that four wanted members of the Mahdi Army, a Shiite extremist group, were spending the night at their homes, soldiers of Troop A, 3rd Squadron, 1st U.S. Cavalry Regiment went to work.

Moving by Humvees just before 2 a.m. into a neighborhood laced by canals on the southeastern fringe of Baghdad known as Four Corners, troop commander Capt. Troy Thomas and his soldiers quickly isolated the homes of the wanted men and moved in.

Within minutes, they found their quarry. The operation, which lasted less than 90 minutes, also netted several illegal weapons, propaganda materials, stashed cell phones and a trove of documents that would likely lead to other wanted figures.

One of the captured men had been hired to kill Thomas&#8217; top informant, Thomas said. Another was a photographer who documented roadside bomb attacks against U.S. forces. The third was part of a kidnapping ring and had transported bombs. The fourth, surprisingly, was a local Sunni who spied for the Mahdi Army, or Jaish al-Mahdi, the militia of the Shiite cleric Muqtada al-Sadr and among the most radical of Iraq&#8217;s sectarian groups.

The men were among 66 wanted individuals, all but a handful of them Shiite extremists, that Troop A had detained in the past two months in Four Corners. Because of the aggressive targeting, sectarian violence in the area has dropped dramatically.

While the Troop A raid, conducted earlier this month, represents just one successful operation in one small sector of U.S.-occupied Iraq, it&#8217;s representative of many of the successes that are occurring across 3rd Brigade, 3rd Infantry Division&#8217;s sector, which encompasses most of the east and southeastern flank of Baghdad east of the Tigris River.

Since arriving in Iraq five months ago, the brigade has built a new forward operating base in the desert east of the Iraqi capital and established four combat outposts in areas that have seen little U.S. presence in the past four years. Eight infantry and cavalry companies now operate in an area where there used to be only two.

Since June 15, when the 3rd Infantry Division launched Marne Torch, the first of several offensives aimed at disrupting insurgent activity south of Baghdad, the 3rd Brigade has killed more than 100 enemy fighters, captured more than 260 others, including at least eight &#8220;high-value individuals,&#8221; and conducted numerous missions with Iraqi army and police forces, Grigsby and other officers say.

Still, the brigade&#8217;s mission has focused on more than bullets and bombs, with $10 million already spent on local projects, mostly to improve roads and water distribution, and $16 million committed to future projects. The biggest project is the restoration of a water pump station that supplies 90 percent of the water in the district, which insurgents destroyed several months ago.

According to Maj. Joe Sowers, the brigade&#8217;s public affairs officer, the economic projects have employed 3,200 local residents, giving some of them an alternative to taking up arms.

Lt. Col. Todd Ratliff, commander of the brigade&#8217;s Special Troops Battalion, said that as security improves in the sector, economics and local governance projects will become more of the brigade&#8217;s focus. One program will give $10,000 in start-up money for promising local business projects. The hope is that at least one-third of them will succeed. Unemployment in the area runs at 70 percent.

&#8220;If people see that we&#8217;re working to improve the local economy, then they will be more inclined to support the local government,&#8221; he said. Ratliff also has noticed another trend: The more local contractors he hires for local projects, the more tips he gets on the activities of the &#8220;bad guys.&#8221;

Grigsby credited 3rd Brigade&#8217;s success to the fact that more Iraqis were cooperating now with his troops than ever before. &#8220;They know that we are here to stay,&#8221; he said.

But with President Bush promising to withdraw at least 20,000 troops from Iraq by July, it&#8217;s unclear how long there will be a sustained U.S. presence in 3rd Brigade&#8217;s area of operations.