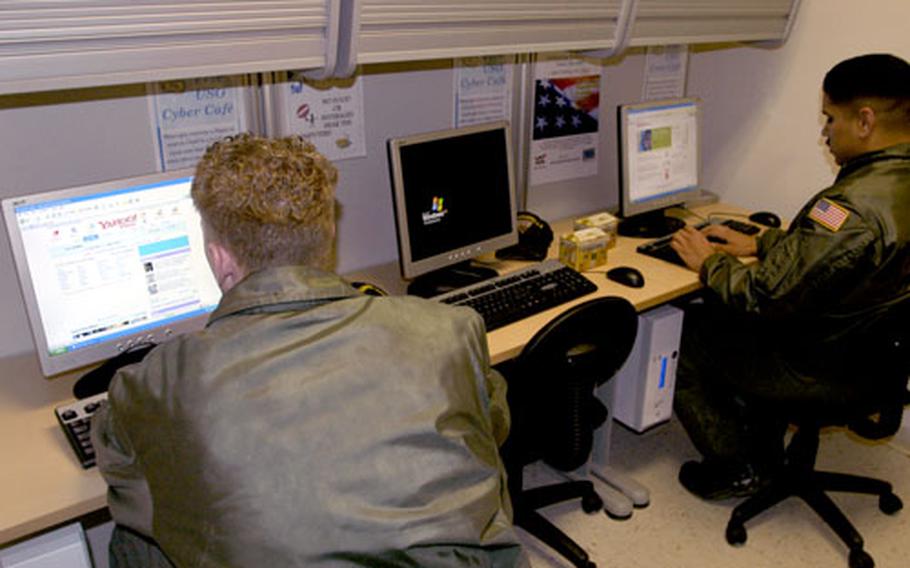 The Naples United Service Organizations office opened a free high-speed Internet cafe at the air terminal last week, allowing passengers and base personnel to go online and, most important, keep in touch with family and friends by e-mail.

For unlike other government computers on base, including those in the library and single-sailor Liberty Center, USO&#8217;s computer lab does not restrict Web-based mail sites such as Hotmail or Yahoo.

As a result, the center is a welcome Web-based refuge for base residents.

Seaman Joseph Gonzales of Naval Air Station Sigonella, Sicily, on a seven-hour layover in Naples, checked his Yahoo e-mail a few computers down from Ingram.

&#8220;It&#8217;s especially important with the restrictions the military has for personnel use of the Internet,&#8221; Sabrina Pullido, Naples USO&#8217;s marketing and programs manager, said of the increased access.

Pullido said that the computers and the ADSL Internet access were completely funded by USO. The five computers are set up in the old slot machine room on the second floor, near the USO office and Burger King.

The small terminal hosts various flights during the week, and over the weekend one of the military-chartered Patriot Express flights passes through on Fridays, and returns on Saturdays, carrying hundreds of passengers on each leg.

Pullido said that USO is also working to install new pay phones in the terminal. These phones, she said, will offer discounted rates to the U.S. and are expected to be available this spring.