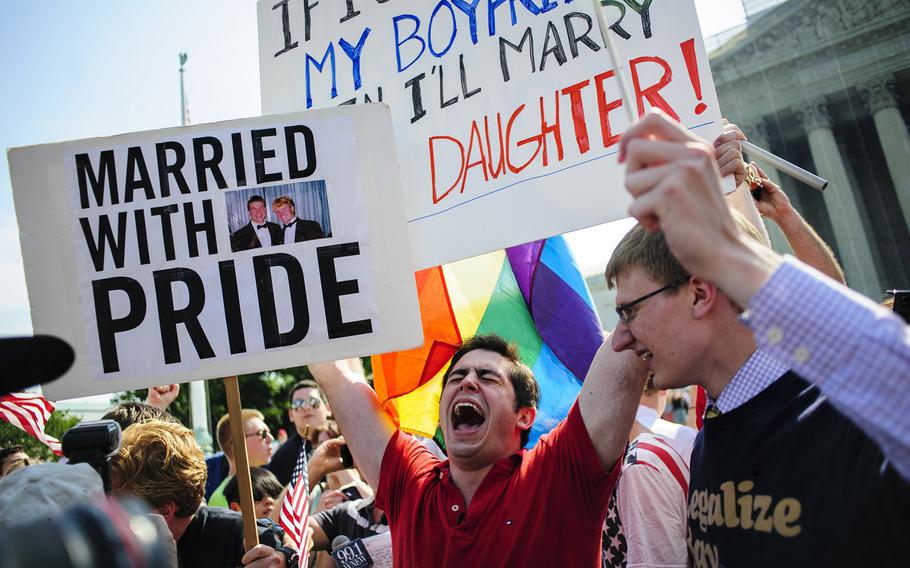 David Baker, 24, center, of Phoenix, Arizona, celebrates outside the Supreme Court after hearing that the Court struck down the Defense of Marriage Act, Wednesday, June 26, 2013, in Washington, D.C. (Pete Marovich/MCT)

The U.S. Supreme Court’s decision on June 26 to strike down a portion of the Defense of Marriage Act ushered in a huge victory for gay rights that was particularly significant and life-changing for same-sex military couples, long denied many of the most basic benefits extended to military families.

The landmark case came nearly two years after the repeal of “don’t ask, don’t tell,” the law banning gay and lesbian servicemembers from serving openly in the military.

The 5-4 decision overturned a key provision of the 1996 federal DOMA that defined marriage as a union between man and woman, ruling that legally married same-sex couples were entitled to the same federal benefits as married heterosexual couples.

The ruling eliminated the disparity between federal law and Pentagon policy, created after gay military members were allowed to serve openly following the repeal of “don’t ask, don’t tell” in 2011.

After DADT was lifted, military personnel no longer had to hide their sexual orientation for fear of being discharged but, because of DOMA, their spouses were still denied important benefits the military provides families such as survivor payments, health care, on-post housing and consideration for joint-spouse assignments, among others.

The high court’s ruling on DOMA freed the Pentagon to construe the words “spouse” and “marriage” to include same-sex spouses and marriages.

Defense Secretary Chuck Hagel immediately vowed “to make the same benefits available to all military spouses — regardless of sexual orientation — as soon as possible. That is now the law and it is the right thing to do.”

The Pentagon moved swiftly to roll out equal benefits, but there were hurdles.

In South Korea, some couples couldn’t get ration privileges to shop on-base because of a potential conflict with the status of forces agreement between the U.S. and South Korea. The matter was finally resolved in late November, when U.S. Forces Korea decided to grant full marriage benefits to same-sex couples, allowing spouses of gay and lesbian servicemembers and U.S. civilians living in South Korea to shop at the commissary and post exchanges.

Other issues surfaced in 2013 that gay-rights advocate groups said attest to the challenges that still remain to integrating openly gay and lesbian servicemembers into the military..