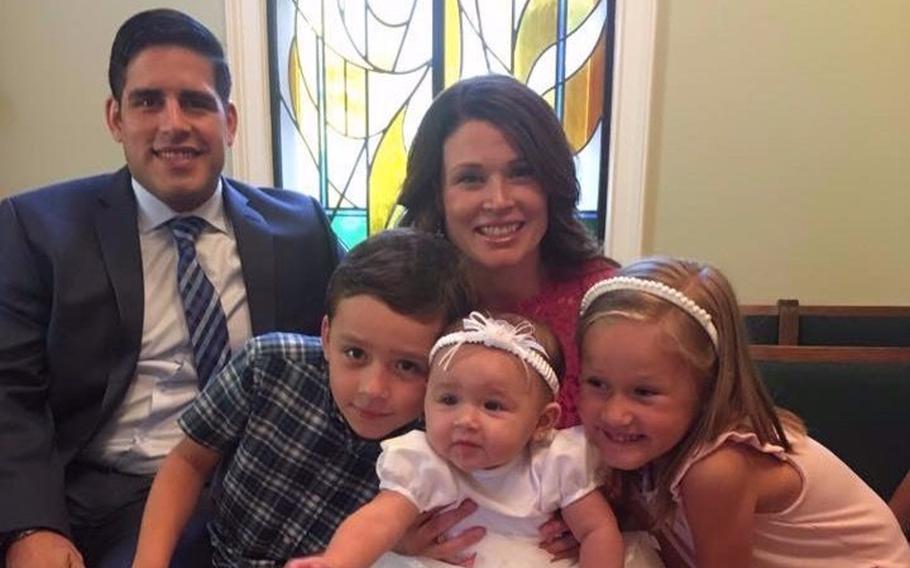 Maj. Agustin Gonzalez and two of his children died in a car crash Saturday, May 25, when their vehicle struck a tow truck on Interstate 65 in Kentucky. (Courtesy Gonzales family GoFundMe site)

An online fundraiser for the family of Army Ranger Maj. Agustin “Augie” Gonzalez had raised more than $140,000 as of Friday, after news that he and his daughters Noelle, 6, and Gwen, 2, died in a car crash over Memorial Day weekend.

Kentucky State Police said Gonzalez, 36, was driving south on Interstate 65 in Hart County, Ky., near Bonnieville, when his vehicle rear-ended a tow truck that had stopped to assist with another collision, WKYT News reported.

He didn’t see the truck, which was parked partially in the left lane, investigators told the news station.

Gonzalez died at the scene, WKYT reported. His daughters were taken to nearby hospitals but later died of their injuries.

The family was heading to Fort Carson in Colorado Springs, Colo., after changing stations from Cary, N.C., said an account of the accident on a GoFundMe page set up for the family.

His wife Melissa Gonzalez and newborn son were on a flight at the time, said the page, set up by the PTA at a school where she was a second grade teacher.

When she arrived at the family’s home in Colorado, “military officials and family friends were there to meet her and tell her the tragic news,” People Magazine reported.

She has asked for privacy but prayers and messages of condolences were encouraged through GoFundMe, said an update to the page.

“We want to send our heartfelt condolences to the Family and Friends of the Gonzalez family,” said Col. Monte’ L. Rone, commander of the 1st SBCT, in the statement. “We will continue to support his family during this tragic time and honor Agustin’s legacy as a father, husband, son, and Soldier.”

A career infantry officer who deployed four times to Afghanistan, Agustin Gonzalez had recently earned his master’s degree in public policy from Duke University through the Downing Scholars Program, a competitive initiative of the Combating Terrorism Center at West Point that sends a handful of Army officers each year to attend graduate school at top-tier universities.

“All the members of the Sanford community are greatly saddened by the tragic news of the passing of Augie Gonzalez and his two precious daughters,” said Judith Kelley, dean of the Sanford School of Public Policy at Duke University, in a Facebook post. “Augie was an exemplary student, deeply engaged with life in our school, and it was with great pride that we congratulated him and his family on his graduation just two weeks ago.”

In an August interview with Sons of the American Legion Radio, Agustin Gonzalez said he was looking forward to completing the program and returning to the Army to serve as a battalion operations officer.

A New Jersey native, he had served as an enlisted soldier before earning his commission through ROTC at Rutgers University in 2006. He then served as a rifle platoon leader in the 101st Airborne Division (Air Assault) and as company commander in the 82nd Airborne Division, he said in the interview last fall, which is posted on YouTube.

He deployed to Afghanistan once with each division, then spent four years at 3rd Ranger Battalion in Fort Benning, Ga., where he deployed two more times to the country, he said. He also deployed to South Korea as the commander of a special operations task force, states a biography on the U.S. Military Academy website.

A funeral mass for him and his two daughters is scheduled for Monday at 10 a.m. at St. Aedan’s Roman Catholic Church in Jersey City, N.J., his brother said in a Facebook post. Burial will follow at Holy Cross Cemetery of North Arlington, N.J.

His death was “unreal,” said a niece, because he always came home from the “countless missions, tours, and operations” the Army sent him on.

“He had so much more to do in this life. All while being a husband, father, and commander,” wrote Victoria Moreno, his niece, on Facebook. “This is who he was, a father who put his family first while making an impact on the lives of everyone he met all the way.”