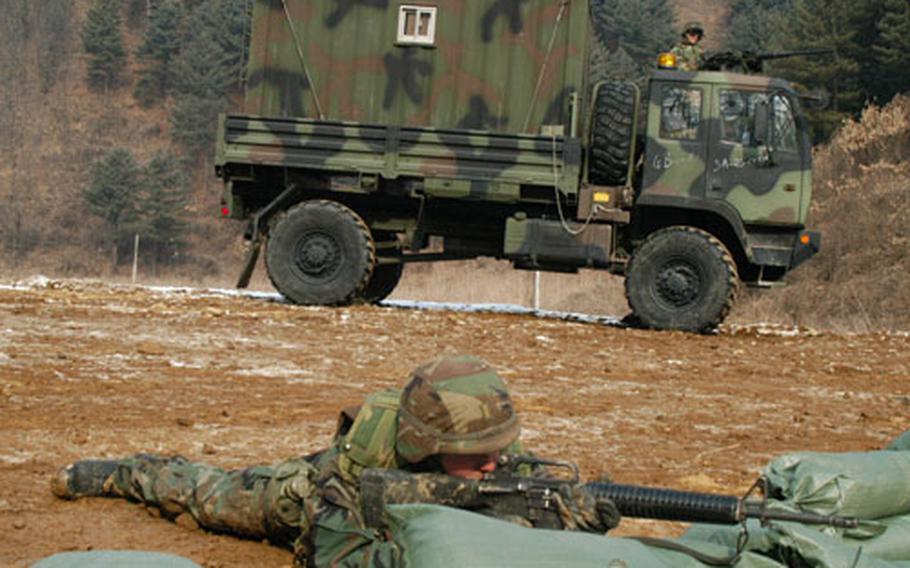 A soldier from the 302nd Forward Support Battalion lines up an enemy target during a simulated attack on his convoy Thursday. (Seth Robson / S&S)

A soldier from the 302nd Forward Support Battalion lines up an enemy target during a simulated attack on his convoy Thursday. (Seth Robson / S&S) 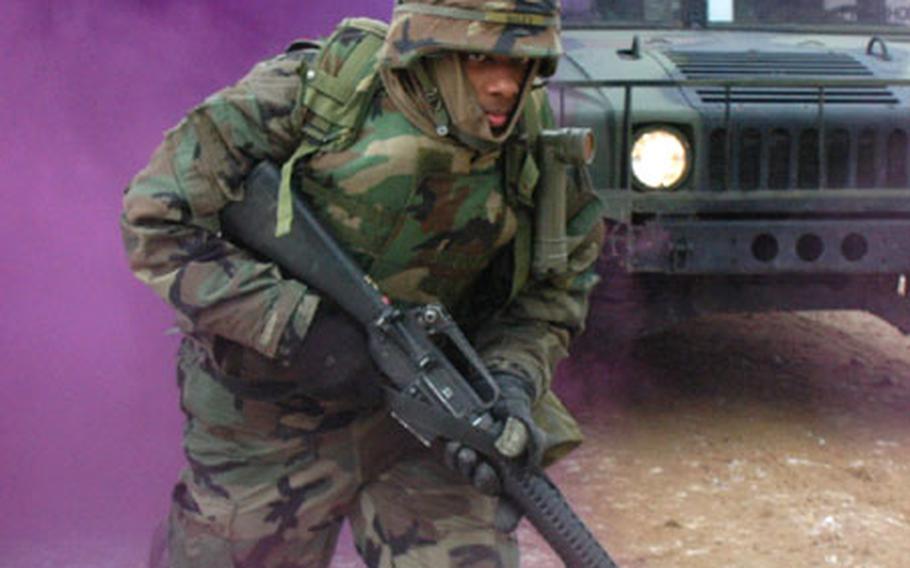 A soldier from the 302nd FSB rushes forward to meet an attack on his convoy during a live fire exercise on Thursday. Soldier were given live rounds once they hit the firing line. (Seth Robson / S&S)

BLACKHAWK VILLAGE RANGE, South Korea &#8212; Ambush attacks on convoys in Iraq have prompted a 2nd Infantry Division live fire exercise designed to give support soldiers the skills to defend themselves and their vehicles.

&#8220;With ongoing missions, we don&#8217;t have all the time that the killers have on firing,&#8221; he explained, referring to infantrymen and tankers who practice engagements all the time.

Ritch said the exercise was a response to attacks on convoys in Iraq. Pfc. Jessica Lynch and her maintenance company were the most famous example. Those attacks haven&#8217;t stopped, as insurgents quickly learn to attack soft-skinned vehicles as opposed to armored Humvees or tanks.

&#8220;With the current military operations we have going and the way the enemy has been engaging us and taking out convoys with unconventional warfare, most of the casualties in Iraq have been in convoys,&#8221; Ritch said.

Thursday, soldiers from the 302nd formed 10-vehicle convoys and drove toward a collection of block structures used for urban combat training. A purple smoke bomb near the lead vehicle marked the start of the &#8220;attack.&#8221;

Soldiers piled out of trucks and Humvees taking defensive positions, while others ran to a firing area to engage the &#8220;enemy&#8221; &#8212; a dismounted platoon-sized element represented by man-sized targets popping up behind berms on the range.

Soon, fire from M-16s was taking out enemy targets up to 300 yards away. Some of the shooting was deadly accurate, but other soldiers clearly needed more time at the range, one taking about half a dozen shots to hit the closest target.

Soldiers were soon covered in mud from the icy, slushy ground but appeared to enjoy themselves.

As battalion medic 2nd Lt. Rudolph Ganther rested his M-16 on a sandbag, a machine-gunner looked on from the roof of a truck he was protecting.

&#8220;Our medical company is responsible for running a troop medical clinic at Camp Casey,&#8221; Ganther said. &#8220;Medics usually treat people. Here we are preventing the enemy from attacking. It makes you a complete soldier to do things like this.&#8221;

&#8220;In this case, the focus is on our support troops. We want them to engage targets and kill the enemy and have confidence in their weapons and their leaders, if they have to stop driving the trucks and defend themselves,&#8221; Boltuc said.

Battalion Command Sgt. Maj. Jason Kim said many of his troops told him the exercise is the best thing that&#8217;s happened to them, since they came to South Korea.

First Brigade Command Sgt. Maj. Joseph Zettlemoyer, who supervised the live fire portion of the exercise, said it was easy to differentiate the soldiers who&#8217;ve been around firearms from a young age, from others who are less confident with their weapons.

&#8220;A lot of them work in warehouses as clerks or in medical facilities. They are exceptional in their support skills,&#8221; he said. &#8220;We want to reinforce the training they get when they entered the army and their basic soldiering skills.&#8221;