Support unit in the spotlight as Afghan mission changes hands 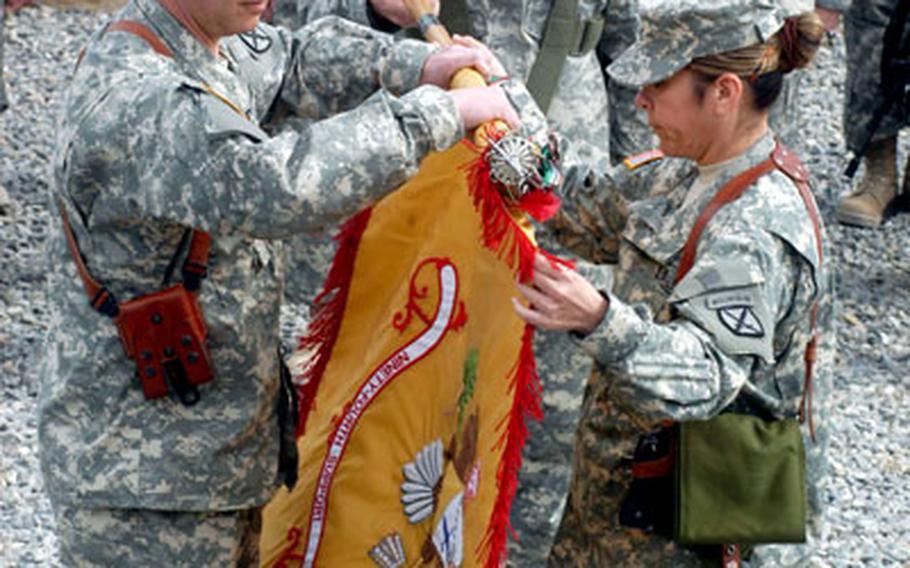 KANDAHAR AIRFIELD, Afghanistan &#8212; Soldiers serving in support roles near the front lines don&#8217;t often get a lot of attention. Unless something goes wrong.

So commanders of a pair of logistic task forces took a few minutes in the spotlight Saturday &#8212; during a transfer of authority ceremony &#8212; to shine light on their troops.

&#8220;To the recently departed soldiers of LTF 173 &#8212; their service in Afghanistan during Operation Enduring Freedom VI has been simply awe-inspiring,&#8221; Fox said during a ceremony seen mainly by troops of the incoming task force.

Lt. Col. Michael Howitz said he&#8217;s already seen what members of the 94th Brigade Support Battalion can do. The Fort Polk, La.-based unit interrupted its preparations for Afghanistan and got real-world experience in aiding victims of Hurricane Katrina.

Of course, storm-damaged Louisiana is a different environment than war-torn southern Afghanistan. But soldiers in the 94th have been in worse situations in its history, which dates back to a World War II quartermaster element. The last time its colors flew overseas was in Vietnam.

&#8220;Today is the first time in 37 years that the colors of the 94th Support Battalion have flown in combat,&#8221; Howitz said during his speech.

The two units share &#8212; or will share &#8212; a lot in common. Both served in Vietnam. Both were activated or reactivated in early 2005 as part of larger units. And both will be serving far from the main elements of those units in the coming years.

Fox&#8217;s troops return to Vicenza before getting ready for a move to Bamberg, Germany, in September, where the battalion will operate until there&#8217;s room for it to move back to Vicenza. Howitz&#8217;s forces will return from Afghanistan with other elements of the 10th Mountain Division&#8217;s 4th Brigade to Fort Polk, half a country away from the division&#8217;s other elements in Fort Drum, N.Y.

Their mission in Afghanistan is pretty much the same as well: provide logistical support to other Army units engaging the enemy. The 94th brings fewer personnel and will have fewer U.S. troops to support during its rotation, thanks to an increase in troops in the south from other coalition countries.

That international brigade takes over operations in the south from the 173rd Airborne Brigade in a few days.