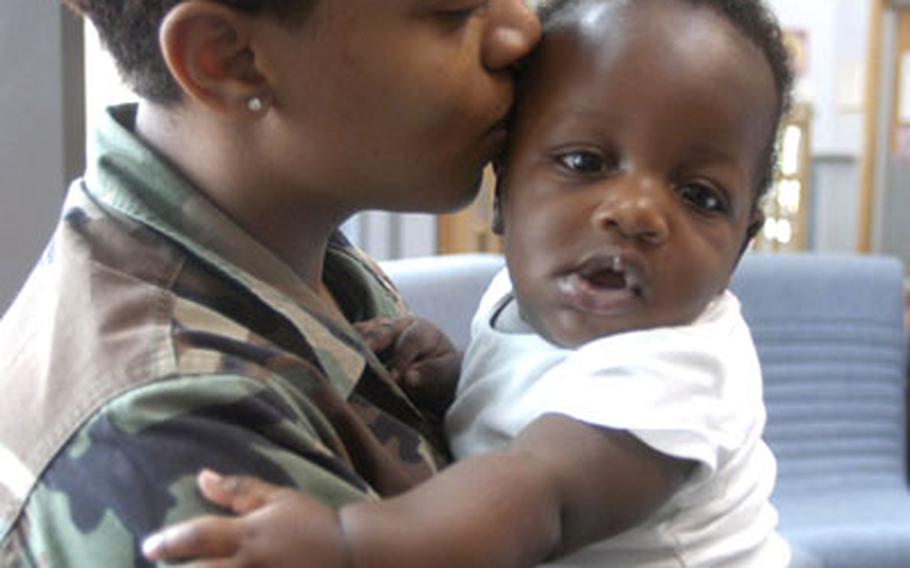 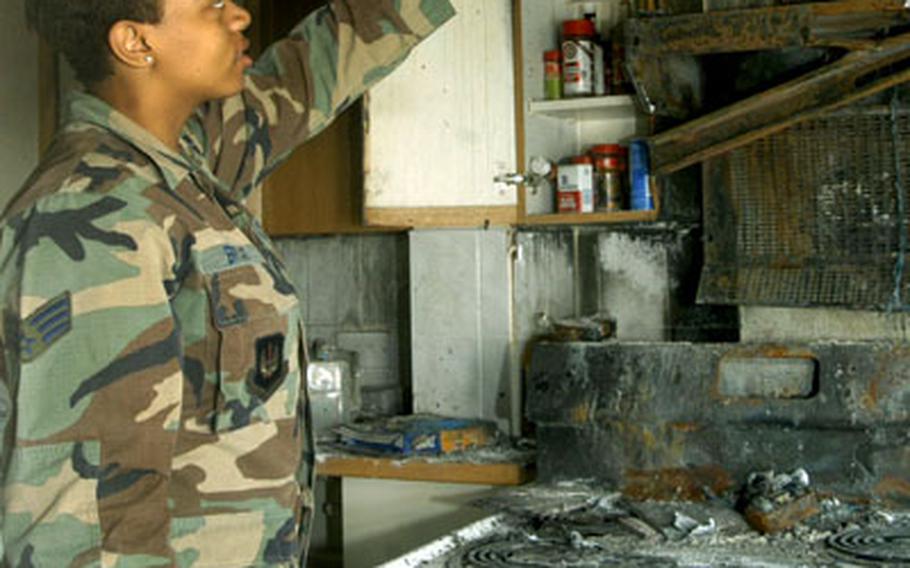 Bryant points to where the fire began. After the fire, she was overwhelmed with donations from local residents. (Sean Kimmons / S&S)

RAF LAKENHEATH &#8212; The smell of smoke escaped from the door as Senior Airman Samantha Bryant entered her home in the Lord&#8217;s Walk neighborhood.

Bryant, an aerospace medical service technician for the 48th Medical Operations Squadron, inspected her living room furniture that sat in the same place she left it when she escaped from her burning house on June 22. Coats of ash covered the furniture and a layer of black soot stained the ceiling. In the kitchen, where the fire began, flames left their mark. Everything near the stove was destroyed.

The 22-year-old single mother from Washington, D.C., has a long road ahead of her as she deals with lost items and damaged property. Luckily for her, she will not take this route alone. Upon hearing about the fire, groups and individuals have opened up their hearts and left the single mother snowed under with donations.

Kitchen fire out of control

About 5:30 p.m. on June 22, Bryant was at home preparing dinner when her 5-month-old son, Norsean, began to cry in the living room. She went to comfort him.

Less than two minutes later, Bryant said, she heard a &#8220;whoosh&#8221; and saw a pinkish-red light coming from the kitchen &#8212; a pan of oil on top of the stove had caught fire. She instinctively turned the stove off, but the fire grew out of control.

But she couldn&#8217;t get a signal on the phone. She ran to her neighbor, retired Marine Gunnery Sgt. Gary Hodson&#8217;s house. Hodgson said he opened the door to a frantic Bryant.

Hodgson called the fire department, grabbed his fire extinguisher and headed to Bryant&#8217;s house. The smoke was at shoulder level as he made his way to the kitchen, where he saw the top of the stove engulfed in flames.

A neighbor was waiting outside to hand him another extinguisher, and Hodgson returned to the fire.

Firefighters arrived and were able to extinguish the blaze.

The next morning, the Enlisted and Civilians Spouses Club allowed Bryant to obtain clothes and baby items free of charge from the thrift store on base.

On top of that, the club gave her two $100 gift certificates to the commissary and Army and Air Force Exchange Service.

Frey said she also has been flooded with donations from units and individuals on Bryant&#8217;s behalf. From clothes, appliances and furniture to baby items and cash donations, the fire has brought many people together to help Bryant.

Frey even took a phone call from someone willing to donate a new 29-inch TV, but with one stipulation &#8212; Bryant couldn&#8217;t have it until after the World Cup soccer championship.

&#8220;It makes you proud to be in the Air Force with all the support that this young lady is getting,&#8221; said Frey, who estimates that she has received more than $700 in cash donations for Bryant.

Bryant and her son are planning to move into a new home on RAF Feltwell on July 6. They have been living in billeting since the fire.