Parking is so scarce at Patch Barracks, home to the U.S. European Command Headquarters, that drivers routinely double park, as they did Thursday, outside the Central Issuing Facility. The 6th Area Support Group is working on several plans to alleviate parking woes. (David Josar / S&S)

Parking is so scarce at Patch Barracks, home to the U.S. European Command Headquarters, that drivers routinely double park, as they did Thursday, outside the Central Issuing Facility. The 6th Area Support Group is working on several plans to alleviate parking woes. (David Josar / S&S) 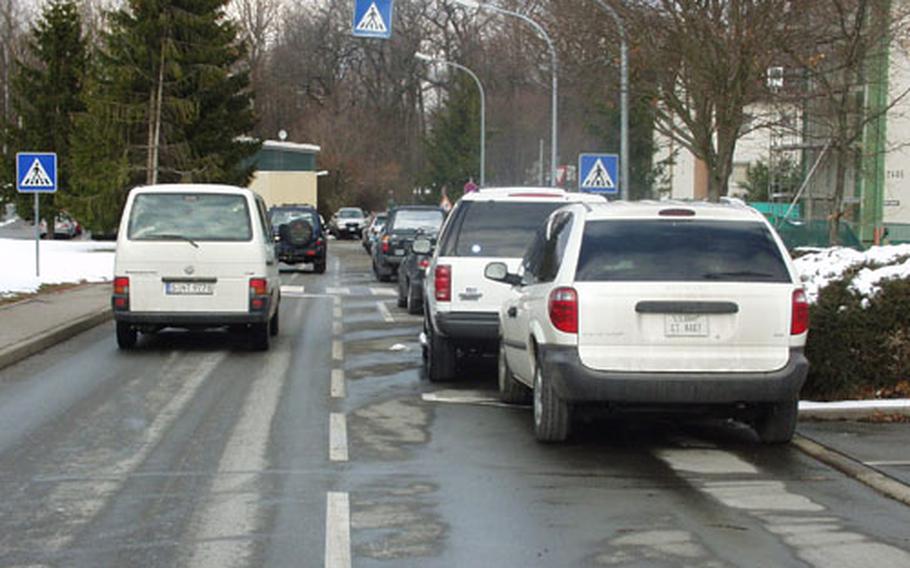 Parking is extremely tight near a housing area on Patch Barracks. The base, which is home to the U.S. European Command Headquarters, is about 480 parking spaces short of what studies indicate is needed. (David Josar / S&S)

STUTTGART, Germany &#8212; The 6th Area Support Group is moving forward with a plan that would improve the shortage of parking spots at the U.S. European Command headquarters on Patch Barracks.

At a town hall meeting Wednesday night on Kelley Barracks, 6th ASG officials said a $28 million proposal to open a shopping center at Panzer Casern was one of several measures being implemented to ease the parking crunch.

The shopping center would shift most of the stores, such as the post exchange facilities, from Patch to Panzer. Patch is short roughly 480 spaces, 6th ASG chief of staff Joseph Moscone said.

Moscone praised the 6th ASG commander, Col. Gwendolyn Boney-Harris, for advocating a number of moves that added about 115 spaces in the past year. There are currently more than 2,000 parking spaces on Patch.

Moscone said the work to create spaces include moving a skateboard park and shifting barriers in front of the Provost Marshal&#8217;s Office. The military police are also strictly enforcing timed parking in front of the retail zones on Patch.

Meanwhile, the EUCOM chief of staff, Army Lt. Gen. John Sylvester, has done his part to ease the parking crunch, Moscone said, by walking to work on Patch Barracks and advocating that others also walk to their jobs, use the military shuttle bus or car-pool. Many people who live on Patch still drive their vehicles to their jobs on the base.

Still the biggest boost to ease the squeeze would be a plan, which is being finalized, to build the shopping center at Panzer, and then shifting and downsizing some of the shopping facilities on Patch.

Patch&#8217;s shopping facilities are scattered in several buildings across an area that is already crowded with Department of Defense Dependents Schools, a commissary, child-care services, a medical clinic and other support activities.

Army and Air Force Exchange Service representative Tom Gagron said Wednesday that the shopping center should get Defense Department approval and congressional funding in the next few months, with groundbreaking possibly by next spring.

Moscone said the 6th ASG also has lobbied the DOD and the Defense Commissary Agency, through U.S. Army Europe, to keep open two small commissaries on Kelley and Panzer.

If those facilities close, some of those customers would then shop at Patch and increase traffic, he said.

Meanwhile, plans are under way to increase the food court at Patch Barracks. Gagron said the food court has 160 seats, but sales figures show it should have more than 400.

In the works is the opening of a Subway, expanding the Burger King and Anthony&#8217;s Pizza, adding an indoor child play area and moving a Baskin-Robbins store from one set of buildings to the food court itself.