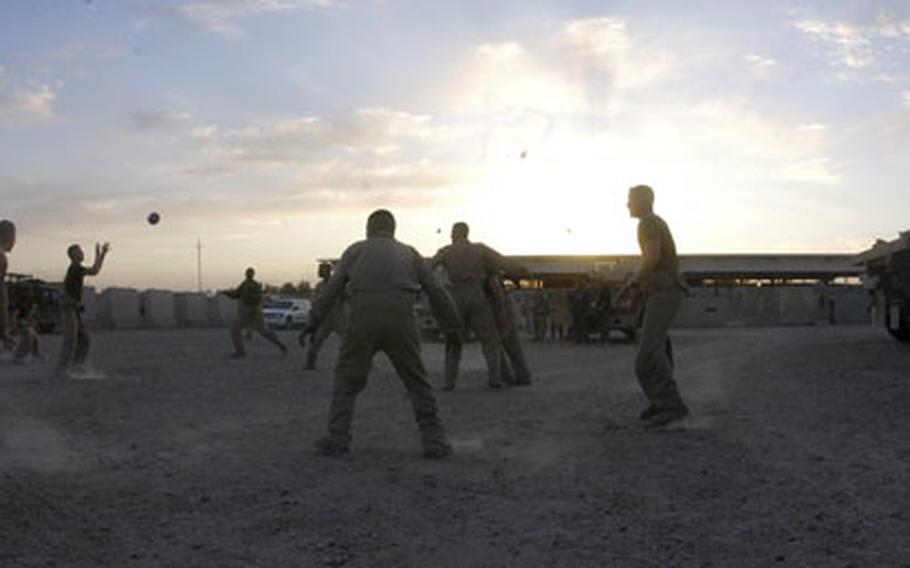 CAMP TAQADDUM, Iraq &#8212; Most of the logistics Marines don&#8217;t lament the fact that their combat comrades, who are outside the wire hunting down the bad guy, get more attention.

But without them, the infantry and combat soldiers and Marines wouldn&#8217;t have the supplies they need to survive.

&#8220;Everyone has their place in this fight, and this is ours,&#8221; Harris said. The supply company has about $133 million worth of inventory stored at Camp Taqaddum, the logistical hub for all forces serving in Anbar province. &#8220;We are the Wal-Mart of western Iraq,&#8221; joked Capt. Sean Murray.

The stock is divided into 25,000 categories &#8212; everything from uniforms and fire-resistant Nomex gloves to screws, bolts, bullets, bottled water, toilet paper, transmissions, engine parts, tires, radios and radio parts &#8212; all stored in roughly one square mile of Camp Taqaddum.

Marines have developed a well-orchestrated method of supplying troops at both large facilities and smaller outposts that extend to the Syrian and Jordanian borders.

A key facility is the ammunition supply point, with an inventory of $91 million in ammo, said Gunnery Sgt. Walter Andrews.

The supply runs are risky. Troops and civilians making them are susceptible to roadside bombs, car bombs and snipers.

It took some five hours to make a recent supply run from TQ to Camp Fallujah, a city only 14 miles away. But the direct route once was heavily mined and is often laden with roadside bombs. For safety, supply runs use alternate routes. The recent 50-plus vehicle convoy included security Humvees and up-armored heavy transport trucks.

The workload at the logistical hub is about five to six times greater than what the Marines push when in the States &#8212; and they&#8217;re doing it with fewer Marines than usual. Half of the battalion has remained home to work inventory and supplies from that end, said Chief Warrant Officer 2 John &#8220;Mojo&#8221; Simpson, the company&#8217;s operations officer.