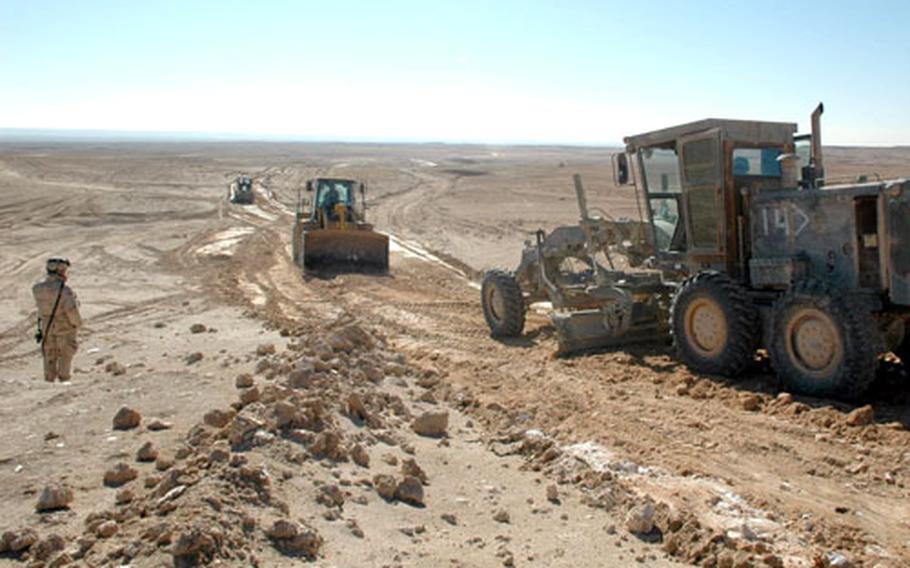 U.S. soldiers use a grader and a loader to construct a new road amid moon-like terrain near Iraq’s border with Syria on Tuesday. The road is due to be completed this spring. (Monte Morin / S&S)

U.S. soldiers use a grader and a loader to construct a new road amid moon-like terrain near Iraq’s border with Syria on Tuesday. The road is due to be completed this spring. (Monte Morin / S&S) 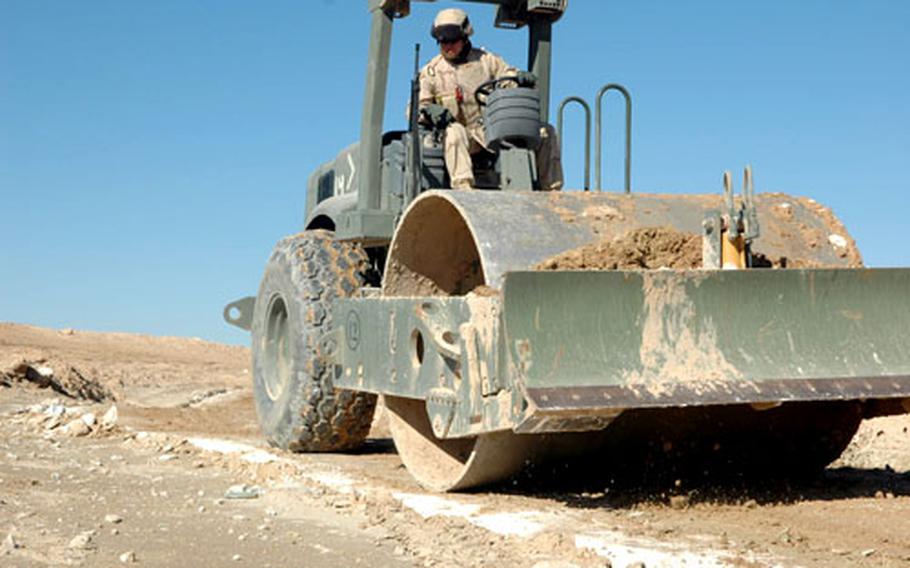 A soldier drives a vibrating compactor over the surface of the new road. (Monte Morin / S&S) 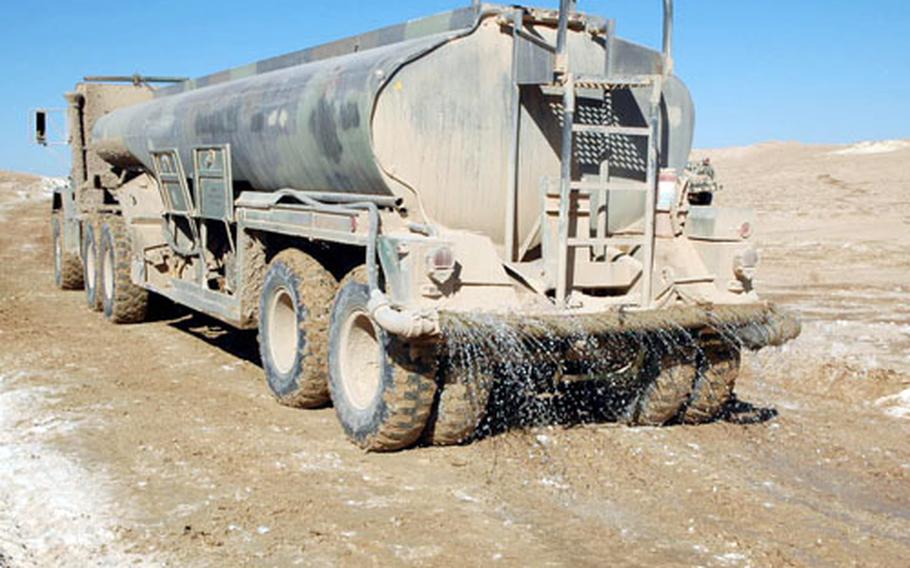 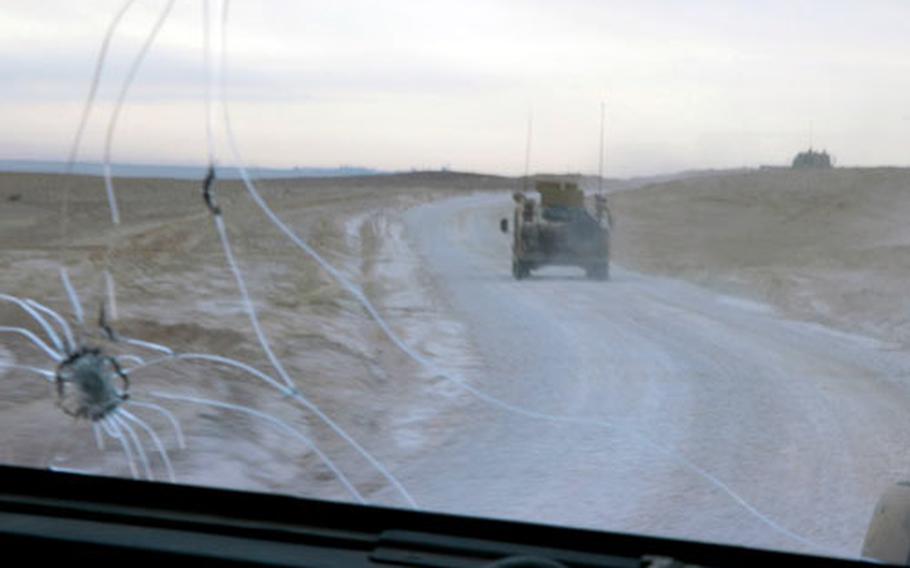 Humvees travel over a section of newly constructed road near the Syrian border on Wednesday. (Monte Morin / S&S)

Located just south of the Syrian border amid the rugged hills and jagged waddis of the Jazirah Desert, Combat Outpost North is among the newest and most austere of U.S. outposts.

The camp serves up nightly T-rations and lukewarm showers and has zero phone connections.

The combat outpost, or COP, receives water, food, mail and other supplies over a winding, spine-hammering supply route that slows vehicles to a grinding crawl.

COP North is further isolated by deep dunes of flourlike sand, or &#8220;moon dust,&#8221; that mire vehicles up to their axles, or blind drivers in orange clouds of dust.

In the last two months, however, soldiers from the 913th Engineer Company have been trying to change all that.

The Tennessee National Guard unit, attached to the 46th Engineer Battalion, which itself is attached to the 30th Naval Construction Regiment, has begun construction of a gravel roadway it hopes will improve transportation in and out of the outpost.

The 18-kilometer stretch of highway will wind between deep sand traps and boulders, and connect the COP to a flotation bridge spanning the Euphrates River north of Qaim.

The road is due to be finished by spring, but its progress has been slow because of the difficulty of delivering supplies and construction material.

Commanders say the new road is critical, because the outpost will eventually serve as a base for Iraqi army and border patrol personnel, whose vehicles are hard-pressed to supply the camp at present.

The road will cut their travel time from 18 hours to just two.

On Tuesday, a new delivery of heavy equipment arrived and the vehicles were quickly pressed into service.

Road graders planed the earth flat, while bucket loaders and dump trucks heaved sand and gravel on the northernmost section of the road.

In order to make the road as durable as possible, soldiers compacted the earth along the roadway by wetting it down with an enormous watering truck and then pressing it flat with large vibrating rollers.

The need for water requires frequent trips to the Euphrates, a 1&#189;-hour excursion down the uncompleted portion of the road.

Working in the dry, loose sand is a challenge, but recent rainy-season downpours have helped with the construction, said Lt. Bryon Grimco, 36, of Martin, Tenn.

Soldiers in the 913th said they considered themselves lucky to be doing jobs that they had been trained to do, and hadn&#8217;t been detailed to other jobs.

The company&#8217;s first sergeant, Bill Taylor, 53, of Trimble, Tenn., compared it to similar projects he had worked on in countries like Honduras, bringing basic services to small villages.

&#8220;In Honduras, we had all these macho Latino guys in tears because we brought water to their village. When you see that, it does something to you inside.&#8221;

For those who live at COP North, the slowly growing road is just one of a number of recent improvements.

Sevey, who oversees COP North&#8217;s upkeep and maintenance, said that despite it&#8217;s current deprivations, the soldiers, Marines and Navy Seabees who live there consider it home.

Sevey, who takes great pride in the camp, doesn&#8217;t like to hear it maligned by visitors.

&#8220;The most difficult thing has been getting a supply line flowing into this area,&#8221; Sevey said.