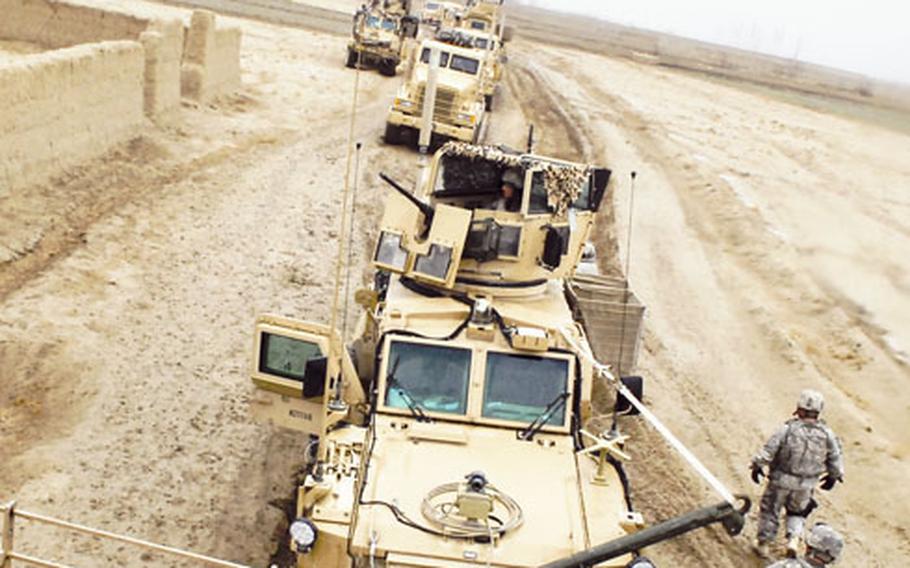 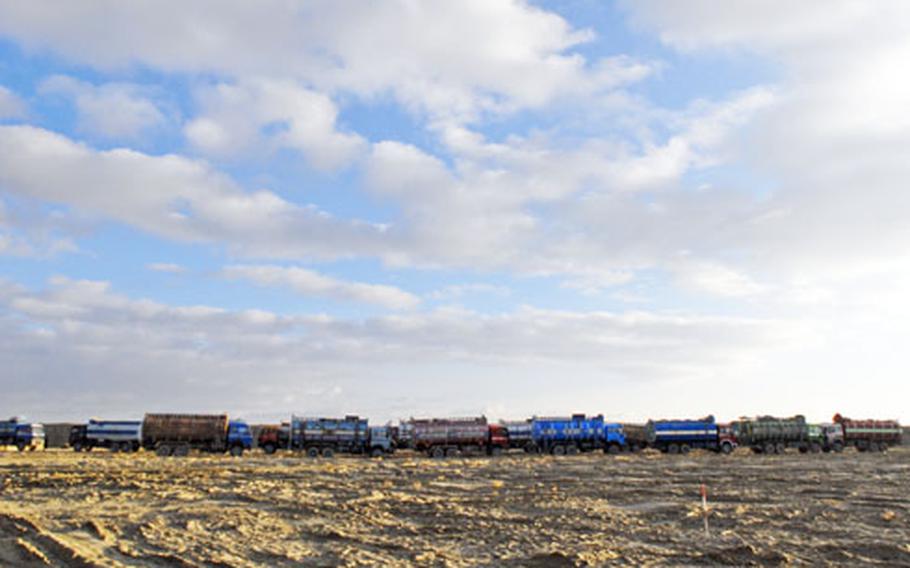 A line of Afghan-driven "jingle trucks" waits to leave a U.S. base in southeastern Afghanistan. The military depends on local transport to move fuel, but officers say the drivers are often inexperienced and understandably jittery on the dangerous rides. (Michael Gisick/S&S) 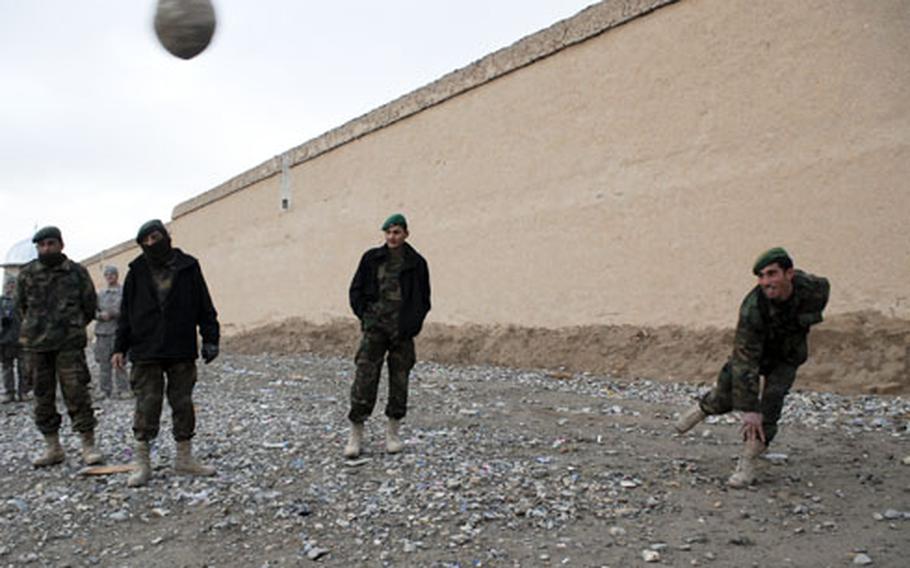 During a break in a three-day convoy that covered roughly 60 miles, Afghan soldiers participate in the proto-Olympic sport of "large rock tossing." The military relies on local trucking to move much of the fuel needed to run everything from generators and heaters to Humvees and armored vehicles. (Michael Gisick/S&S)

PAKTIKA PROVINCE, Afghanistan &#8212; It was three days since they left their base in southeastern Afghanistan and the U.S.-led convoy had traveled barely 40 miles through the desert. Now they were getting bogged down.

With night and a cold rain falling, a broad "wadi," or dry river bed, stretched across their path. The infantry company at the nearest outpost advised them not to try the crossing in the mud. But the 60-vehicle convoy was under orders to push through to the outpost, where the fuel they were carrying was badly needed, and there was no way around it.

Behind the lead trucks, the convoy stretched for three miles, a collection of super-modern military vehicles designed to withstand bombs and jerry-rigged Afghan fuel tankers decorated with bells and murals, a "Mad Max"-like caravan stalled in the wasteland.

As it turned out, they would make it across the wadi, but not easily. Most of the Afghan "jingle trucks," named after their tinkling decorations, got stuck in the mud, some more than once. Some of the American vehicles got stuck trying to pull them out. The crossing took three hours.

The convoy finally reached its destination, Combat Outpost Kushmand in Paktika province, but only after a 17-hour day that covered just 20 miles.

As the U.S. ramps up its efforts in Afghanistan heading into next year, supplying units on the front lines remains a monumental task. A sharp spike in roadside bombings and ambushes this year, many of them aimed at relatively easy targets such as fuel tankers, has forced ground convoys to take cumbersome security measures and seek out secondary routes in a country where primary routes are often little more than dirt tracks.

"The fight here is so logistical," said Capt. John Barger, who commanded the convoy to COP Kushmand. "Afghanistan is not developed like Iraq. It&#8217;s really painful."

Barger said his unit, a route clearance team drawn from the 206th Engineer Battalion of the Kentucky Army National Guard, had encountered more than 50 roadside bombs since it arrived in March, far more than the number found by the unit it replaced.

Midway through the first day of this convoy in late December, Barger&#8217;s route clearance team found another bomb, halting the procession for two hours.

Farther back in line, other problems arose. Several of the Afghan-piloted jingle trucks came up with flat tires. During one halt, a jingle truck driver apparently intent on jockeying for a better position closer to the American trucks suddenly veered off the road and crashed into a ditch.

"It was a mistake," the driver said with a shrug.

The military relies on local trucking to move much of the fuel needed to run everything from generators and heaters to Humvees and armored vehicles. But driving jingle trucks is a dangerous occupation, and many of the drivers have little experience, officers say.

"If they get hit, they&#8217;re basically driving around in a big bomb," said 1st Lt. Mark Canary, who led the supply distribution platoon from 1st Battalion, 506th Infantry Regiment, which patrols this part of Paktika province.

"Then they also have to worry about the Taliban finding out they&#8217;re working with us and kidnapping or killing them or their families."

Even before the rain came, the convoy moved at little more than walking pace, crawling through open desert and dun-colored settlements where the villagers lined the road, watching impassively like spectators at a slow, rather disappointing parade.

The convoy spent the first night outside a joint U.S.-Afghan army base, taking up residence in unpowered huts heated with woodstoves. The jingle truck drivers slept in their cabs.

But it rained heavily overnight, and the next day the convoy went nowhere. When the rain lifted the soldiers tossed a football and watched the Afghans engage in what might be described as a large-rock throwing contest. One of the U.S. soldiers drank a bottle of dip spit mixed with Red Bull for money. They bought a sheep from a nearby village and, with the help of a jingle truck driver, slaughtered and cooked it for dinner.

But by the third morning, the mood began to slide. The convoy had been ordered to push on but few believed they&#8217;d make it through the mud. Many described their job as the worst in Afghanistan. Their trips often lasted two weeks. On a recent voyage, they&#8217;d found 10 roadside bombs, hitting a few of them.

"Our best favorite mission was to take somebody two plywood outhouses," one soldier said.

"Down there in Taliban Valley, that&#8217;s where both of the Huskies got blown up," said another.

A single-passenger mine-clearing vehicle that resembles a militarized tractor, the Husky might as well be called the "guinea pig" because it tests the waters, so to speak. It also goes by the nickname "the Purple Heart box."

Cpl. Dusty Hall, a 26-year-old college student from Virgie, Ky., drove the lead Husky until he got blown up and medically evacuated out in July. But after three other soldiers were blown up on their last mission, Hall was back in front for the trip to Kushmand.

With little time in any one place, the convoy soldiers say they often feel unappreciated at the bases where they deliver supplies, where amenities are already stretched thin. Internet cafes often mysteriously close when they arrive. Showers are suddenly broken.

The low point came over the summer when they were sent to recover the bodies of U.S. soldiers killed in a roadside bombing. Exhausted, they returned to a base and found nowhere to sleep but the parking lot.

"There was nothing laid on for us," Barger said. "They saved us some pizza, but we&#8217;re sleeping in the parking lot."

Sometimes it was a challenge, Barger said, to make his troops understand that they mattered in this war.

But after 17 hours in their cramped trucks, capped off with a final delay when a jingle truck tipped over in the last village on the route, at Kushmand the convoy at least found heated tents and some leftover Salisbury steak and chili.

They left the base at first light two days later, and by midafternoon they were out of radio range.