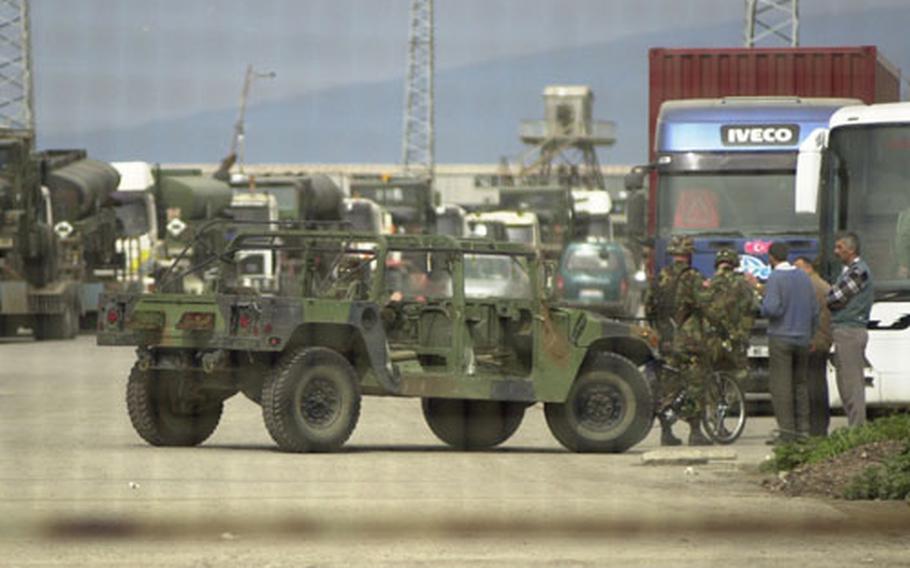 A convoy with dozens of U.S. military logistics vehicles prepares Sunday to leave southern Turkey&#39;s seaport of Iskenderun. With increasing political uncertainty that Turkey will ever approve the deployment of U.S. combat forces into the country, however, the convoy never left. (Jon R. Anderson / S&S)

A convoy with dozens of U.S. military logistics vehicles prepares Sunday to leave southern Turkey&#39;s seaport of Iskenderun. With increasing political uncertainty that Turkey will ever approve the deployment of U.S. combat forces into the country, however, the convoy never left. (Jon R. Anderson / S&S) 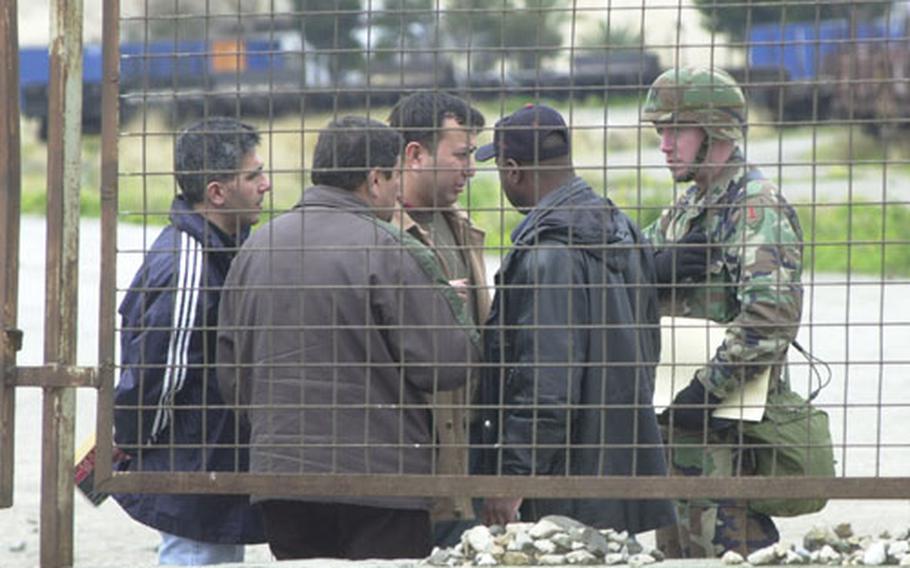 ISKENDERUN, Turkey &#8212; Every day for the past two weeks, frustrated servicemembers have prepared to move equipment to forward locations as they waited for Turkey to give the OK to start unloading supplies.

Sunday was no different, as events in the Turkish parliament Saturday only served to confuse things.

On Sunday, a long U.S. military convoy stretched the length of the seaport in Iskenderun, which is squeezed full with camouflaged trucks, Humvees and engineering equipment.

With the port filling up with U.S. military equipment, 1st Infantry Division logisticians remain eager to move it out to make room for more.

Whether additional U.S. forces will land in Turkey is up in the air. A rancorous day in the Turkish parliament Saturday ended when there were not enough votes to approve a 60,000-strong U.S. combat force coming through Turkey to bolster a northern front against Iraq.

Hurry up and wait

As politicians continue to haggle, dozens of U.S. military vehicles &#8212; many of them lashed atop locally hired big rigs &#8212; lined up behind the main gate at the port Sunday morning. A horde of photographers and TV cameramen stood by to record the first U.S. military movement out of the port.

Soldiers wearing the Big Red One 1st Infantry Division patch made final preparations, some loading aboard buses, others coordinating with Turkish authorities.

U.S. officials are still pessimistically hopeful that permission could eventually come for combat units to enter Turkey. If the light does turn green, they say, there&#8217;s still a lot of critical site preparation work left to do and they are getting little help.

Indeed, U.S. military officials have been bemoaning the sluggish cooperation they&#8217;ve received from the Turkish military and parliament, according to military sources close to the situation who asked not be named.

Even with Turkey&#8217;s approval, officials say the U.S. military will still face a massive uphill logistics battle to unload dozens of cargo ships carrying mountains of supplies and hundreds of combat vehicles to equip a force in time for any attack.

U.S. war planners had hoped to begin laying the groundwork for that race weeks ago by bringing in eight cargo ships full of engineering equipment, trucks, fuelers and tank-haulers, along with medical and communications gear.

So far, only three of those cargo ships have been allowed to unload.

&#8220;We have five site prep ships still waiting to come in,&#8221; said Dave Field, deputy operations and readiness officer for the Military Sealift Command in Europe and part of small Navy team in southern Turkey preparing for the massive influx.

Two of those ships &#8212; the Progress and Prodigy &#8212; were turned away because they were Greek Cypriot-flagged vessels, said Field. With long-standing tensions between Turks and Greeks - especially when it comes to the contested island of Cyprus &#8212; Turkish authorities simply refused to allow the ships entry.

Field said officials are looking at either reflagging the ships &#8212; a bureaucratically intensive process &#8212; or in a more sweat-intensive solution, crossing-loading all the gear to more politically acceptable ships.

That problem is one of many that has slowed preparations, said Field. Deliberations over taxes on fuel, which ports are available and how much space at those ports will be dedicated to the military are still ongoing, he said.

Meanwhile, already backing up behind those remaining five site prep ships, say the two MSC logisticians, is an armada of 40 more vessels carrying the go-to-war hardware of the 4th Infantry Division (Mechanized).

In addition to the seaport in Iskenderun, officials want to start bringing gear to Mersin, Turkey&#8217;s largest port just across the bay. The Navy hopes to use a third nearby facility, away from population centers, to bring in tons of ordnance and other explosives.

A team of about 100 soldiers is based at Mersin preparing to manage that logistics effort.

Officials were hopeful that after Saturday&#8217;s vote the pace of unloading would kick into high gear. But with a final decision on combat forces still undecided, officials say the waiting game will continue.