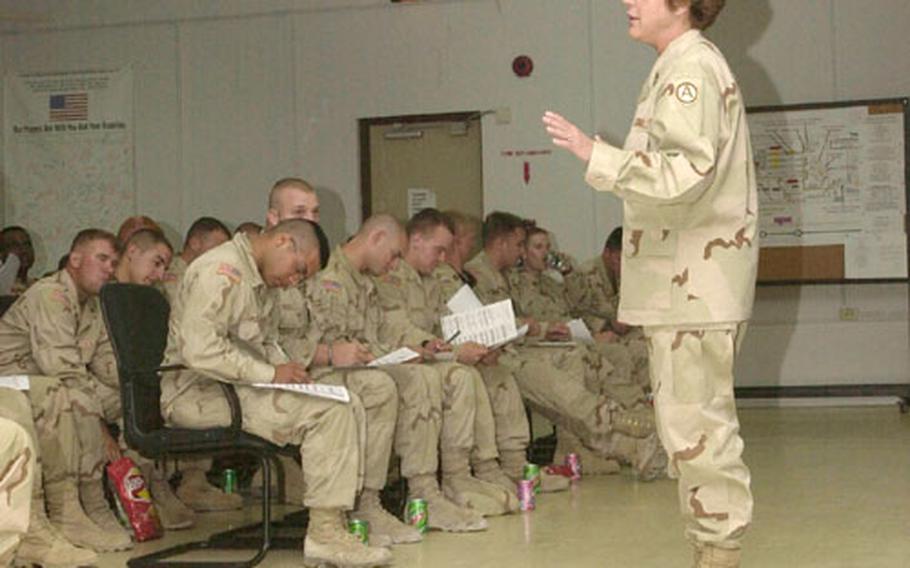 CAMP AS SAYLIYAH, Qatar &#8212; When Army Master Sgt. Ellie Walbridge came to Qatar, she couldn&#8217;t believe the state of the facilities being used for the four-day Fighter Management Pass Program.

The welcome center was in a large, dirty, open-room warehouse with no air conditioning, said Walbridge, the program&#8217;s Morale, Welfare and Recreation supervisor.

It wasn&#8217;t the proper facility to welcome combat troops looking for a four-day break from Operations Iraqi Freedom and Enduring Freedom.

To create the right atmosphere, Walbridge went to the camp&#8217;s top NCO, Sgt. Maj. George Ponder, and said she wanted to make things better. He quickly gave her the go-ahead.

The first step was moving the offices and welcome center for the program. She said the chapel and chaplain&#8217;s offices had just moved out of the other end of the building, and that area was complete with offices and A/C.

Another improvement made was increasing the staff to work on the rest and recuperation program. When Walbridge arrived, she said, there were only two people manning the offices. Now, she has a staff of 11 soldiers from the Wisconsin National Guard&#8217;s 232nd Adjutant General Higher Headquarters Detachment.

Walbridge, who many here say really lit a fire under the program, said her troops have been told that making the men and women coming here happy is top priority.

Walbridge left the active service in 1999 after more than 12 years, but remained part of the service with the Reserve in Minnesota, drilling with Headquarters, 3rd Brigade.

She said when she saw what was happening in Iraq and Afghanistan, she volunteered to go; instead, she was told she would serve stateside. She admits she was disappointed, but that quickly changed when the Army called and asked her to pick between Iraq and Afghanistan. She chose the latter.

Things once again changed for Walbridge as she was told she was going to Cuba. But she was thrown another curveball less than two days before she was to leave. That&#8217;s when she found out she was coming to Qatar.

Army Lt. Col. Jeffrey Corbett, the camp commander, says she has taken the program to another level.

&#8220;She came in with a new set of eyes and saw how we could improve the program,&#8221; Corbett said. &#8220;She is dedicated to treating these servicemembers like the heroes they are. The way she approaches the work, you can tell it&#8217;s straight from the heart.