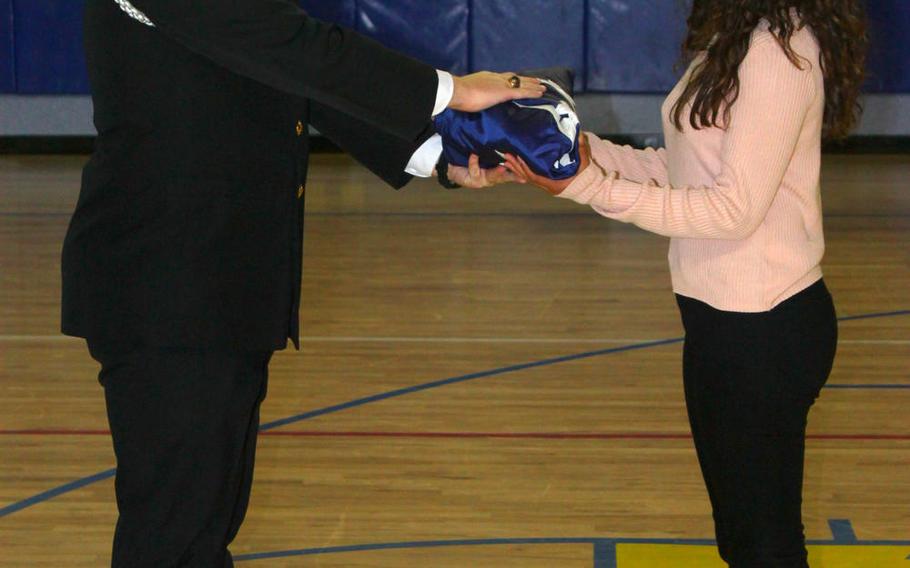 Amaya Wasai, an eighth-grader at Sigonella Middle/High School in Sicily, Italy, receives a folded U.S. flag during a ceremony Tuesday, Jan. 10, 2017, at the school. Amaya is one of 20 students from Sigonella traveling to Washington to participate in the presidential inaugural parade on Jan. 20. (Courtesy: Matt McKown/DoDEA)

Amaya Wasai, an eighth-grader at Sigonella Middle/High School in Sicily, Italy, receives a folded U.S. flag during a ceremony Tuesday, Jan. 10, 2017, at the school. Amaya is one of 20 students from Sigonella traveling to Washington to participate in the presidential inaugural parade on Jan. 20. (Courtesy: Matt McKown/DoDEA) 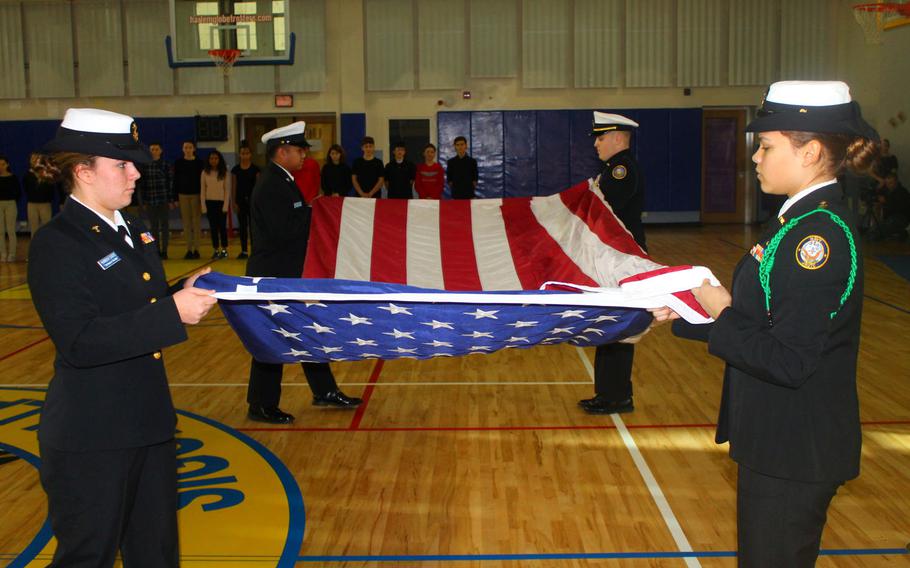 Sigonella Middle/High School Navy Junior Reserve Officer Training Corps Cadets fold an American flag during a ceremony Tuesday, Jan. 10, 2017, at the school in Sicily, Italy. Eighth-graders from the school will head to Washington, where they'll march with the flag in the presidential inaugural parade on Jan. 20. (Courtesy: Matt McKown/DoDEA)

A group of 20 eighth-graders from Sigonella Middle/High School are about to get a living history lesson on the transfer of power from one president to the next.

When President-elect Donald Trump is sworn in and heads down Pennsylvania Avenue to the White House with his motorcade on Jan. 20, the Sigonella students will be right there.

They won’t be among the crowds expected to line the inauguration parade route, however. They’ll be in a much smaller, select group, among some 8,000 participants who will march in the parade.

The Sigonella group was on the list of participants released last month by the Presidential Inaugural Committee. The students will be the sole Department of Defense Education Activity representatives in the parade, where they’ll walk with about 40 other groups, from high school and university marching bands to first responders and veterans groups.

The 20 going on the trip, most students in Shawn McCarthy’s social studies classes, comprise about half the eighth grade at the small U.S. military school in Sicily, Italy.

McCarthy hopes by participating in the parade, his students will “bring awareness to those 50,000 (military) kids serving overseas every day.”

“It’s an amazing time to be there, knowing that in the morning one president will leave the White House and in the afternoon, a different one will show up and run the country,” he said. “That transition is something we’ll be learning a lot about while we’re on the ground.”

The students, McCarthy and five chaperones depart Saturday for a week in the nation’s capital. Besides the parade, they have a busy schedule lined up, including visits to the Smithsonian Institution, the National Archives, Ford’s Theatre, the Pentagon, the Supreme Court, and the Lincoln and Martin Luther King Jr. memorials. They’ll also lay a wreath at the Tomb of the Unknown Soldier at Arlington National Cemetery in Virginia.

McCarthy and his eighth-graders at the time embarked on a similar trip in 2013, when President Barack Obama was sworn in for a second term. They didn’t win a spot in the parade, but they did get to lead the Pledge of Allegiance at the Kids’ Inaugural Concert after First Lady Michelle Obama and Jill Biden found out they would be there, McCarthy said.

Last school year, parents with up-and-coming eighth-graders began asking McCarthy if he was planning a similar trip for the 2017 inauguration. He got the ball rolling in May. In October, the school received permission from DODEA to go.

For the group’s parade application, McCarthy wrote about how much the 2013 trip meant to the students and attached President Obama’s annual declaration of November as the Month of the Military Family.

The only hitch: In the application’s mailing drop-down box, there was no place for an overseas military residence, McCarthy said. He used a relative’s address in Georgia.

To participate in the parade, each of the students had to pass Secret Service security clearances. They’ll march with an American flag that has flown at Sigonella for 12 years.

McCarthy’s students, many of whom have never been to Washington, said they were excited to see so many important national monuments and government institutions; being in the parade is a bonus.

Added Averi Chandler, 13: “I think walking in front of that many people, letting them know who we are, will be super cool.”

The kids and chaperones all have to pay their own way, including airfare. Through fundraisers such as bagging groceries at the commissary and bake sales, the students were able to offset about half of their lodging costs, McCarthy said.

The divisive election hasn’t diminished enthusiasm for the trip, either, McCarthy said. Tickets weren’t purchased until after the election — fares happened to be cheaper then — but nobody decided not to go, he said.

“There was not an email, not a single one of the parents or kids came in and said anything about who won or who lost,” McCarthy said.