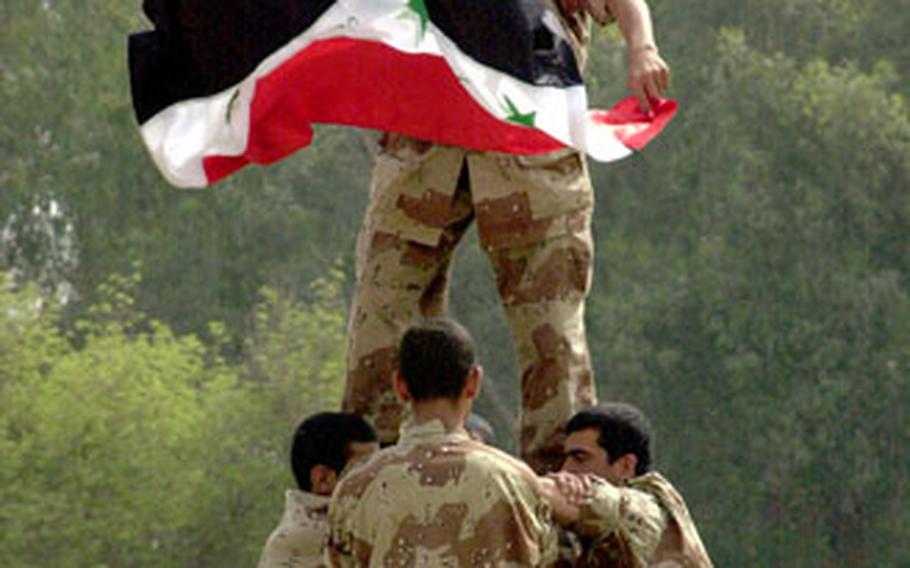 A graduate of the Iraqi army basic training course at Camp Habbaniyah stands atop a human pyramid and waves the Iraqi flag on Sunday. (Joseph Giordono / S&S)

A graduate of the Iraqi army basic training course at Camp Habbaniyah stands atop a human pyramid and waves the Iraqi flag on Sunday. (Joseph Giordono / S&S) 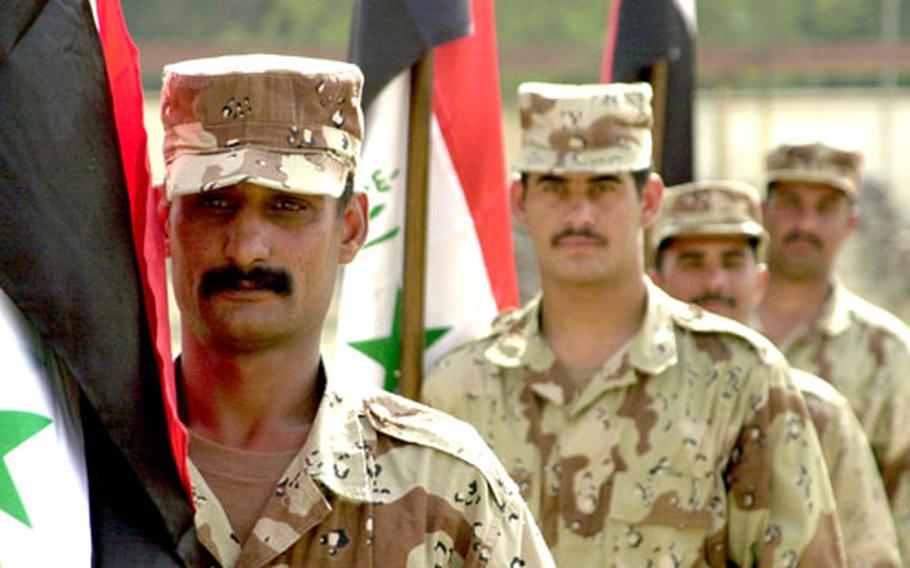 An Iraqi army color guard stands at attention before a graduation ceremony on Sunday near Habbaniyah. The group of more than 900 recruits is the first all-Sunni class to graduate an American-run academy. (Joseph Giordono / S&S) 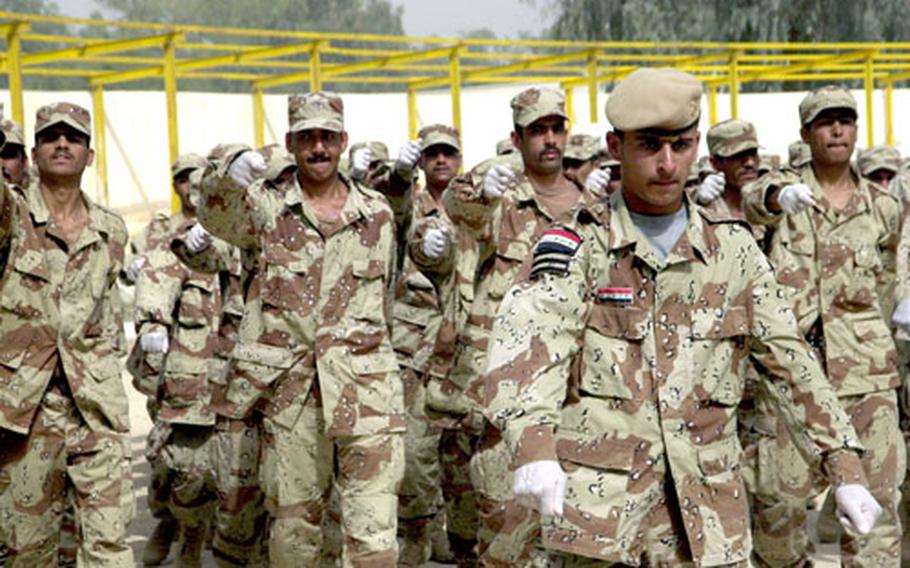 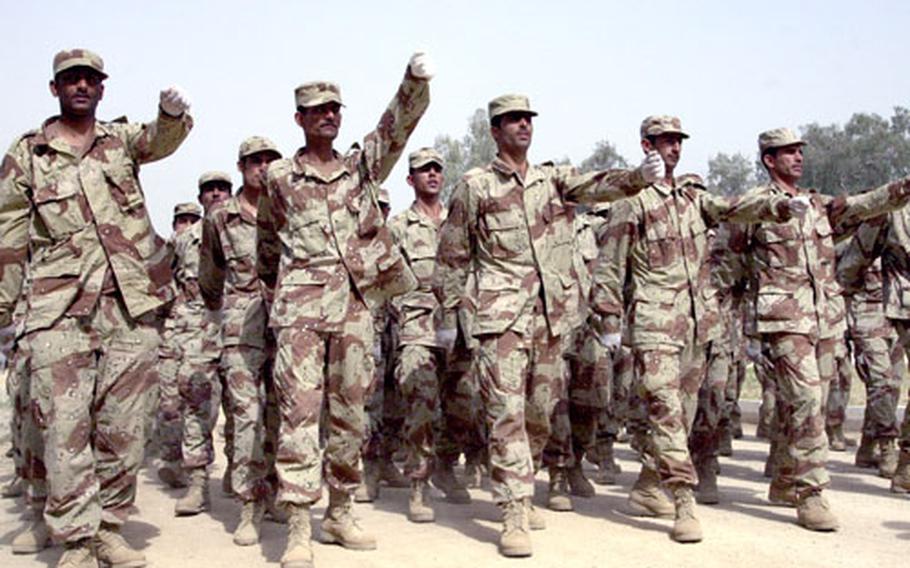 Newly graduated Iraqi army troops march around a track during a ceremony at a training center in Habbaniyah. (Joseph Giordono / S&S) 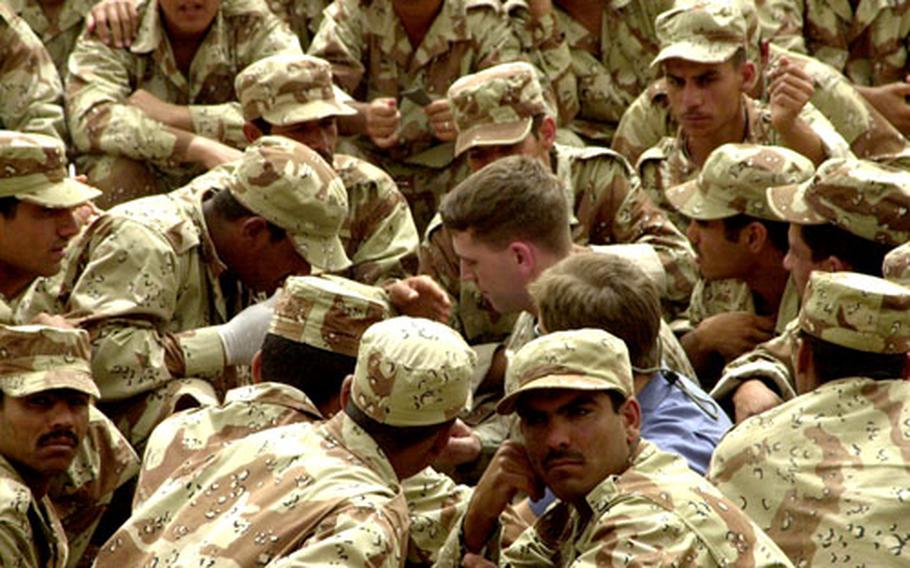 &#8220;The significance is that Anbar province has been the heart of a lot of the insurgency. By recruiting and training military-age males from Anbar, you&#8217;re eliminating a potential recruiting ground for the insurgency,&#8221; said U.S. Army Lt. Col. Steven Greaf, who commanded the basic training center.

Bringing more of a sectarian balance to the Iraqi security forces has long been a goal of the American military command in Iraq. The Iraqi police &#8212; and to a lesser extent, the Iraqi army &#8212; is a Shiite-dominated force that many in Anbar accuse of heavy-handed tactics and abuse against Sunni residents. Thousands of Iraqi army troops already operate in Anbar, but their ranks are made up mostly of Shiites from Baghdad and other areas.

U.S. officials say more than 100,000 of the projected 130,000 needed for the new Iraqi army have been recruited and have finished at least some training.

Sectarian violence in the country threatened to break into open civil war after the February bombing of a Shiite shrine in Samarra. But U.S. military leaders believe that possibility has largely passed, and they look at steps such as Sunday&#8217;s graduation as key stages in a long-term process.

The ceremony began at midmorning, with the Iraqis formed into ranks in the middle of an old horse racing stadium. All the troops had uniforms and boots, and all wore variations of white gloves, including many who sported white socks or old surgical gloves on their hands.

The ceremony began with the singing of prayers from the Koran, followed by a moment of silence for those killed fighting the insurgency. After an array of speeches, the new Iraqi army troops marched around the track as fellow soldiers cheered them on and shouted chants of unity and allegiance to Iraq.

After the ceremony, word spread through the new troops that they might not, in fact, be deployed in Fallujah, but in other, more violent areas of Anbar. Many of the new troops threw their hats in anger or ripped off their uniform shirts and waved them over their heads.

Then, as an Iraqi sergeant major tried to calm the troops, an unlikely figure grabbed the microphone. Gen. Sha&#8217;aban, commander of the Anbar province Iraqi police force, exhorted the soldiers not to give up. As a thousand men crouched and sat in front of him, he told them that they serve all of Iraq, that Iraqis from Basra, for instance, serve in Fallujah and vice versa.

After answering several minutes of questions posed by a representative chosen from among the new soldiers, it appeared Sha&#8217;aban had assuaged most of their concerns.

Some U.S. troops at the ceremony said the sectarian makeup of the graduating class was overemphasized.

&#8220;Sunni and Shiite, that doesn&#8217;t matter. What matters is that these soldiers are from Fallujah, that they are volunteering to protect their own homes,&#8221; said U.S. Marine Corps Capt. Bryce Essary, a Military Transition Team member who works with Iraqi forces in Fallujah.