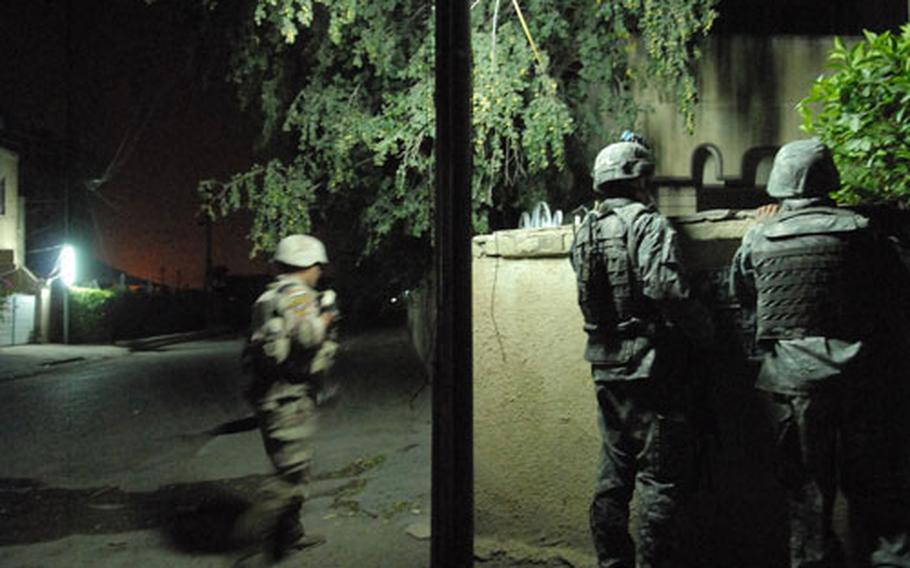 An American soldier (center) and his interpreter (right) peek over a wall Sunday in the Saydiyah area of Baghdad, Iraq, while helping Iraqi Army soldiers (left) look for a black car connected to an attempted killing. The incident was the second in as many days, marring an otherwise successful peace in the area. (James Warden / S&S)

An American soldier (center) and his interpreter (right) peek over a wall Sunday in the Saydiyah area of Baghdad, Iraq, while helping Iraqi Army soldiers (left) look for a black car connected to an attempted killing. The incident was the second in as many days, marring an otherwise successful peace in the area. (James Warden / S&S) 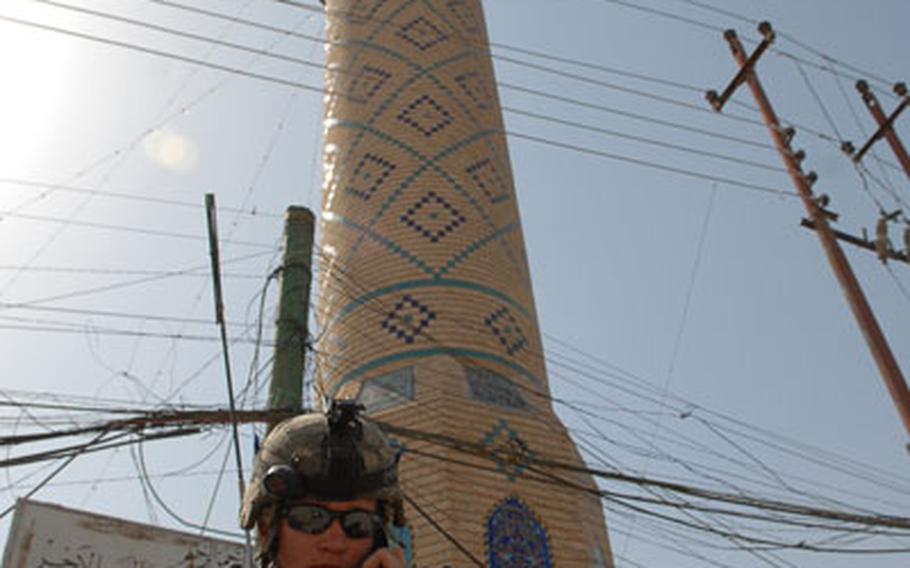 Spc. Stephen Neff, 23, of Mesa, Ariz., checks in on the radio during a patrol Sunday in the Saydiyah area of Baghdad. (James Warden / S&S) 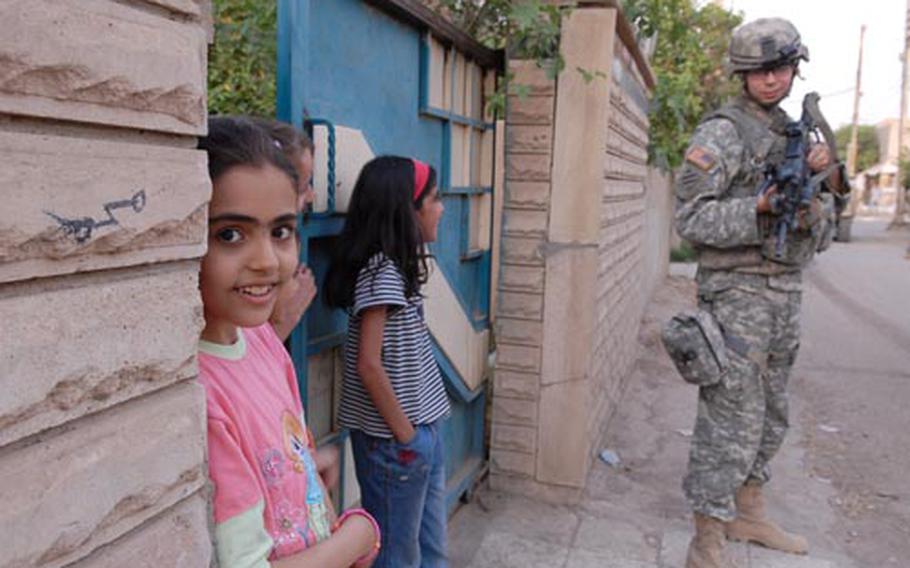 An Iraqi girl turns to check out the camera while Spc. Justin Jelley, 23, of Tulsa, Okla., jokes with another Iraqi girl Sunday in the Saydiyah neighborhood of Baghdad. For soldiers, the presence of children is a reassuring sign that the streets are safe here, in contrast to areas within earshot that are being torn apart by violence. (James Warden / S&S)

Looking at a map, one would expect Saydiyah to be rocked by the same violence that&#8217;s tearing apart other Baghdad neighborhoods.

It&#8217;s nestled against some of the city&#8217;s most violent districts, places where U.S. soldiers died just last week. Mortar and rocket fire hit adjacent districts, and gunfire is a regular part of Saydiyah&#8217;s soundtrack.

But Saydiyah has so far resisted the violence that broke out when Shiite militants kicked off fighting against coalition forces early last week. Residents must still abide by a citywide curfew in effect in Baghdad. But U.S. forces are enforcing this with a light touch, and business continues as usual in Saydiyah, for the most part.

Residents say the makeup of Saydiyah plays a large part in the ongoing peace.

The military has attributed much of the fighting in neighboring areas to breakaway Shiite factions that leaders call &#8220;special groups,&#8221; although some Iraqi government officials say there is no clear line between these groups and the mainstream Mahdi Army, which purportedly has a truce with coalition forces.

But Saydiyah, as Hadithi said, is a majority Sunni neighborhood with large numbers of relatively affluent, well-educated former Ba&#8217;ath Party members. With the start of a countrywide &#8220;reconciliation&#8221; or &#8220;awakening&#8221; movement, many Sunnis now reject violence against coalition forces.

Walls around the area also lock violence out, said Sgt. 1st Class Roy Trevino, a Company A platoon sergeant. Saydiyah has just one entrance, a checkpoint controlled by both Iraqi army and Iraqi National Police. Security forces see everyone who goes in and out. Because they are local, they&#8217;re better able to know who is trying to get in.

When those walls went up, the Americans did a massive clearing operation in December that involved searching every home for weapons and insurgents.

Saydiyah isn&#8217;t free from the bureaucratic clashes that affect other institutions in Iraq. &#8220;Sons of Iraq&#8221; leaders argue with members of the Shiite-dominated support council, many of whom in turn talk badly about some of the military leaders.

The area hasn&#8217;t been totally unaffected by Baghdad&#8217;s recent violence either. Trash litters the streets because the fighting and curfew has kept out workers who clean up the area. Shop owners complain that they can&#8217;t leave Saydiyah to buy merchandise for their stores. Many Shiite-owned stores are closed because the Mahdi Army has ordered its members to strike.

Yet those arguments and difficulties have so far not transformed into violence. People continue to stroll the streets of Saydiyah well into the night &#8212; visiting stores that had been boarded up only a few months ago.