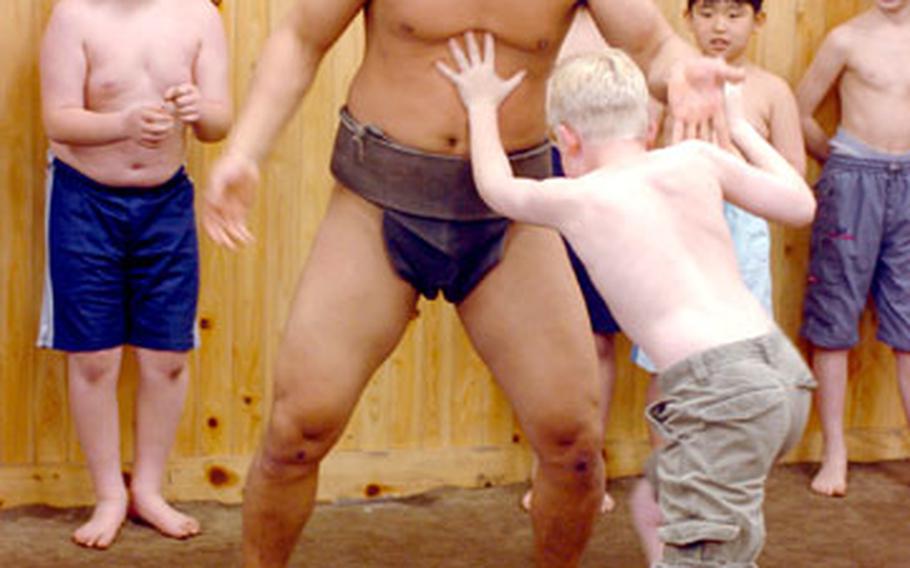 A Camp Zama Cub Scout tries — and tries — to shove a professional sumo wrestler out of the ring on Saturday at the Arashio Sumo Stable in Tokyo. (Christopher B. Stoltz / S&S)

TOKYO &#8212; When push came to shove Saturday for Camp Zama Cub Scout Matthew Decker &#8212; well, it never exactly reached the &#8220;shove&#8221; stage, despite the 9-year-old&#8217;s mighty efforts. But you might want to cut him some slack: He was straining to dislodge a professional sumo wrestler.

He was among about 20 Cub Scouts and Japanese elementary school kids spending Saturday at Arashio-beya, one of Japan&#8217;s sumo wrestling &#8220;stables.&#8221; The visit was part of Zama city&#8217;s efforts, begun about seven years ago, to have its Japanese and non-Japanese residents interact.

Saturday marked the third year the program visited a sumo stable, said Hiroshi Yasumoto, a Zama city liaison division official. It was the second year Zama Cub Scouts were invited and for most of the boys in Saturday&#8217;s group, it was the first visit to a sumo stable.

They began the day by removing their shirts and donning shorts or rolling up their jeans &#8212; their approximation of the sport&#8217;s abbreviated costume. They were taught and practiced basic moves of sumo, where the goal is either to down an opponent or shove him out of the ring.

Tough enough, apparently, to impress stable master Shuji Arashio. He said he&#8217;d expected sumo to be &#8220;hard to approach&#8221; for American children &#8220;since it is a sport played undressed but they seemed to have an understanding of sumo. They were good.&#8221;

To assuage any hunger pangs all that wrestling might have triggered, the American and Japanese kids next got to taste chanko-nabe, the protein- and nutrient-dense stew of meat, seafood and vegetables that sumo wrestlers traditionally eat.