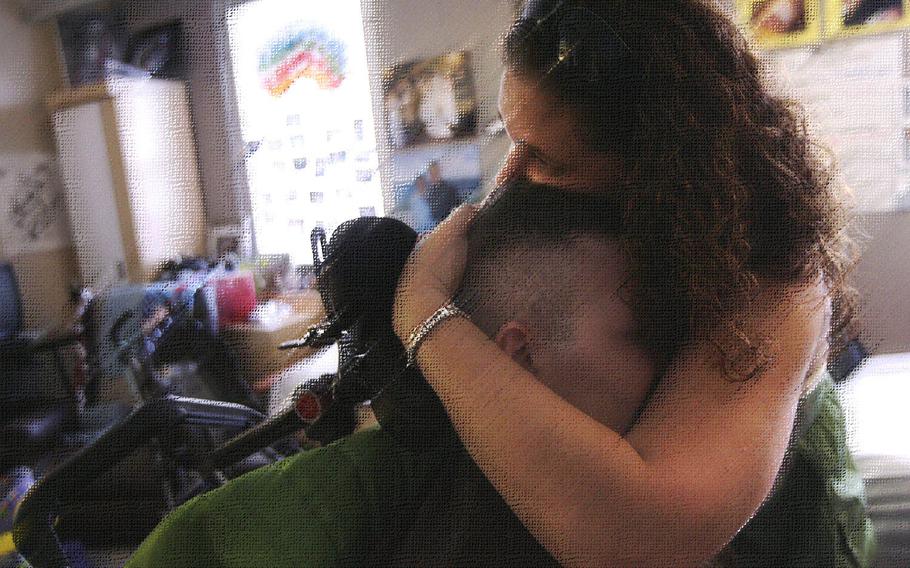 There has been a lot of focus on treatment for veterans coming home from Iraq and Afghanistan with serious physical and psychological wounds. Behind the injuries is often a spouse who assumes the role of caregiver. It can be a full-time job, often on top of child care, and sometimes spouses are forced to quit their jobs and greatly alter their lives. (Stars and Stripes illustration, Dallas Morning News photo/TNS)

WASHINGTON — Torrey Shannon has to drive more than 30 minutes just to get milk and all medical appointments need to be house calls to her remote home more than 9,000 feet up in the Colorado Rockies. She’s rarely able to stray far from her house.

Shannon provides round-the-clock care for her husband, retired Staff Sgt. Dan Shannon, who survived a gunshot wound to the head in Iraq. He needs to live in a remote area because severe post-traumatic stress disorder and brain injury has left him overwhelmed by cities.

Despite this, she said she has struggled to get the support she needs as a veteran’s caregiver — most recently when the Department of Veterans Affairs insisted her husband travel to a city to be reassessed to determine whether he still qualified for caregiving benefits. It took 10 months for her to convince the VA to conduct the reassessment at the Shannons’ home to avoid a potentially harmful trip.

“The man had his head opened up, his records support it, why do I have to keep proving it?” she said Wednesday at a summit in Washington, D.C. on veterans’ caregivers.

The summit was aimed at increasing partnerships between government agencies, such as the VA, and private groups to provide support to caregivers, whose needs are often overlooked, said Kristina Kaufmann, executive director of Code of Support Foundation, a nonprofit group that provides support services to veterans and their families and hosted the summit.

“Forty years ago, we completely failed an entire generation of (Vietnam) veterans and their families and they are still paying for it and so are we,” she said.

There has been a lot of focus on treatment for veterans coming home from Iraq and Afghanistan with serious physical and psychological wounds. Behind the injuries is often a spouse who assumes the role of caregiver. It can be a full-time job, often on top of child care, and sometimes spouses are forced to quit their jobs and greatly alter their lives.

A 2010 law created a VA program to assist caregivers of Post-9/11 veterans, but that still left gaps in support for people taking care of veterans from earlier eras and many Post-9/11 caregivers say government efforts still fall short for them.

After officials with VA, the Department of Defense and the Department of Health and Human Services listed a litany of programs aimed at helping caregivers, the caregivers who spoke at the summit said lack of easily available information about those options is still a problem.

“From where we’re sitting every day right in the thick of the military community, we’re not seeing what you’re talking about,” said Kat Honaker, who took care of her husband, wounded Iraq War veteran Jeremiah Honaker until he committed suicide in 2014.

Meg Kabat, national director of the VA Caregiver Support Program, said more needs to be done to better serve caregivers and that VA is working with other departments to expand services.

“When you support caregivers, you’re taking care of veterans,” she said. “It’s something we need to continue talking about.”