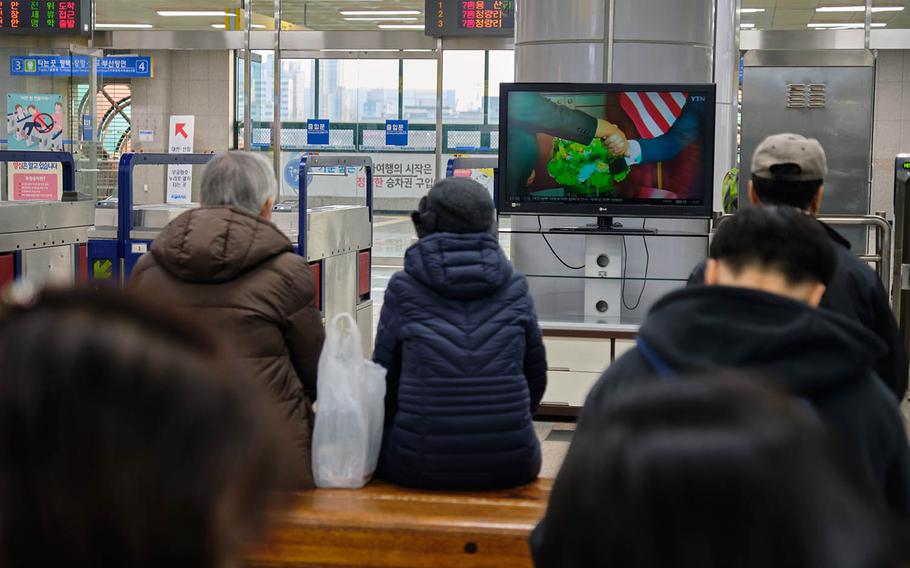 Some servicemembers at Camp Humphreys and Osan Air Base stayed updated on summit news through smartphone apps or American Forces Network on television.

“I really don’t expect much to come out of it,” said Army Sgt. 1st Class Juan Rivera, of Titusville, Fla. “It is good to see both parties making an effort.”

Rivera, who has been stationed at Osan for over a year, said he followed both the Singapore summit in June and the summit between leaders of North and South Korea in April.

In Singapore, Trump agreed to halt joint military exercises on the peninsula, and Kim agreed to destroy a missile engine testing site.

Rivera said he has seen the ramifications of this agreement and is hopeful that joint training can resume sooner than later.

The majority of the approximately 28,500 U.S. troops stationed in Korea serve there for just one year. If these troops don’t get the opportunity to train with the host nation, it affects overall readiness, Rivera said.

Two joint exercises involving the U.S. and South Korea, Joint Resolve and Foal Eagle, are expected to take place in spring, according to CNN.

“We may have to do something else that complies with what the president agrees on,” Rivera said. “We still have to train.”

Although the summit involves countries from opposite sides of the globe, citizens of South Korea remain optimistic of potential outcomes.

“I wish we could go on tours of Mount Kumgang,” he said.

Once a popular tourist destination, Mount Kumgang, along the east coast of the peninsula, is one of the most famous mountains in North Korea.

The mountain used to be accessible through past inter-Korean cooperation efforts, but that was suspended in 2008 after a 53-year-old South Korean woman was shot by a North Korean soldier while entering a spot Pyongyang stated was a restricted military area.

Saying he believed relations with North Korea have improved, Gong said Trump is doing a great job so far.

Should Pyongyang get rid of its nuclear program, Trump has the ability to help improve the impoverished country’s economy, he said.

“However, Kim Jong Un, the young man, can change his mind in a day,” he added. “We should not buy his word 100 percent. Kim Jong Un’s father and grandfather kept nuclearizing.”

Kim Daesu, 38, believes this summit will achieve more progress than the previous meeting of the two leaders.

“It took a long time to meet again with each other,” Daesu said. “There might be something the two sides already agreed. Probably, this is why they’re meeting now.”

Kim said Trump is doing a good job at improving relations in the region, but he expressed some security concerns.

Kim said he does not want the South to drop its guard completely anytime in the foreseeable future.