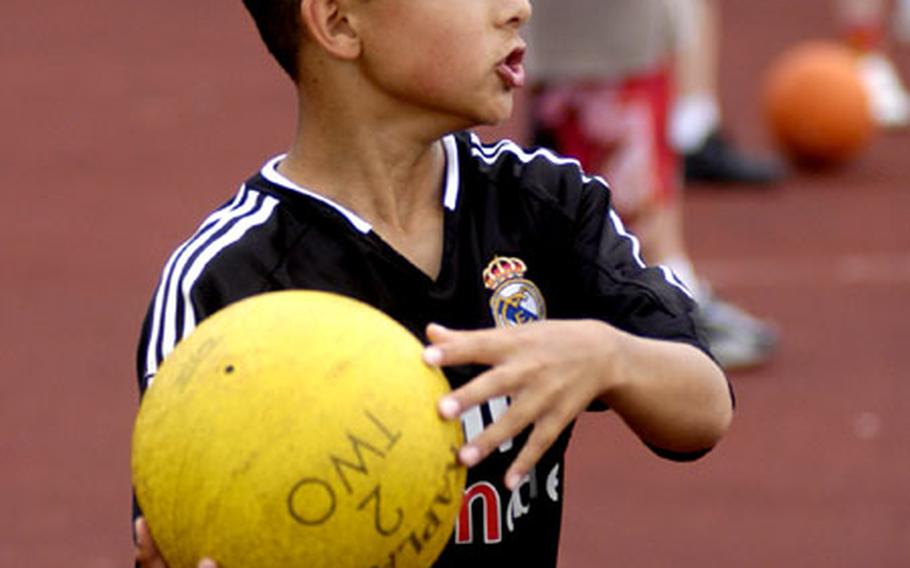 Youth in Vicenza, Italy, take part in a recent flag football game. Bases across Europe have a variety of offerings for school-aged children now that classes are out for the summer. (U.S. Army photo) 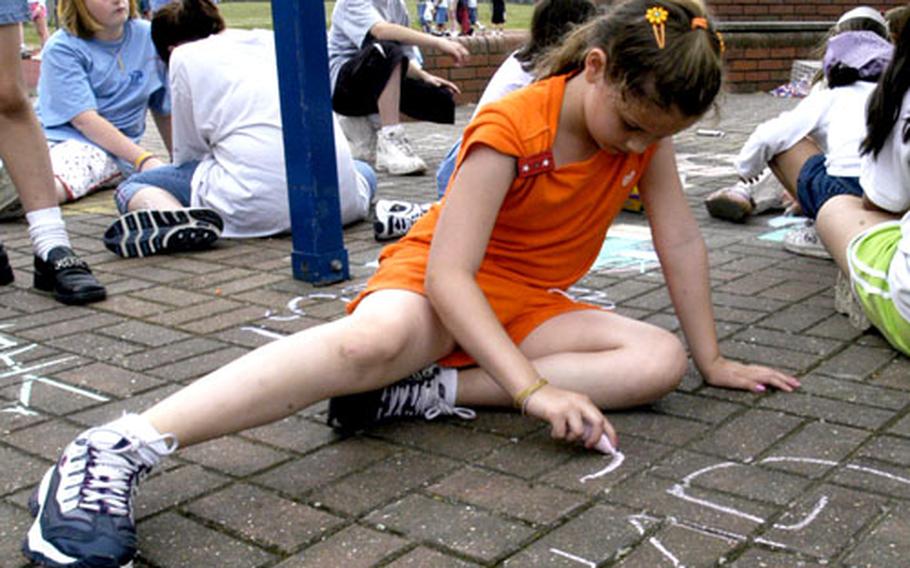 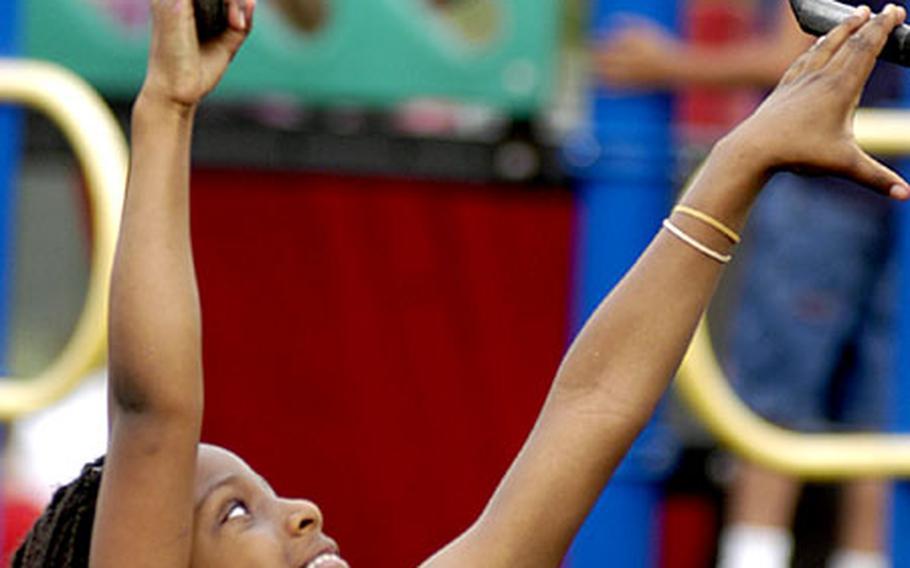 What&#8217;s there for them to do around base this summer?

A glimpse at programs American military communities around Europe are offering actually leads to the opposite question: What isn&#8217;t there for kids to do this summer?

From visiting Sherwood Forest in the United Kingdom to exploring brooding caves in the Benelux. From learning ballet in Rota, Spain, to being treated like a fairy princess in Germany, name an activity and it&#8217;s likely covered at dozens of bases around Europe this summer.

But what about the kid who has a new game or two for his or her Playstation or Xbox?

&#8220;I think this is something that gets them out of the house and gets them real life experiences, instead of virtual experiences,&#8221; said Jan Seachris, a youth specialist with U.S. Air Forces in Europe.

The highest profile activities are four camps at Garmisch, Germany, and Camp Darby, Italy, geared primarily for children of servicemembers who are deployed.

Operation Purple Camp will feature a total of almost 300 campers. The application deadline has already closed. But that&#8217;s not the case for many other activities at both the command and base level.

Many bases have activities planned inside the fences and out. Some events involve weeklong stays far from home, while others will take a few hours at the local youth center. Some activities, such as the local swimming pool, are available for most of the summer. Others are limited to only a single day. Many require parents to pay a fee. Most have limited capacities.

More information is generally available on local Web sites or from local youth centers. Check the listings below to see what&#8217;s happening.

Air ForceMany events around USAFE tie in with the command&#8217;s popular Extreme Summer program. Participation will earn kids points toward prizes.Various camps around Europe, space limited by base, including space programs in Belgium and Turkey, outdoor adventure in England and ropes activities in England and Germany. Also offered are camps for soccer, cheerleading, baseball, children&#8217;s theater and skateboarding.Aviano:

The mammoth new youth center on Area 1 is supposed to open Aug. 15.

Day classes on sewing, volleyball, bowling, archery, pottery making, tennis, kayaking, kite flying, swimming, laser tag and biking.Trips to Sherwood Forest (where archery lessons could come in handy), the beach and several local amusement parks.Teens can learn how to draw murals in a weeklong class in late August, a few days after they have a dance and luau.RAF Lakenheath:

The base&#39;s youth center offers a variety of weeklong camps.Flag football, volleyball, gymnastics, baseball, tennis, softball, cheerleading, rock climbing, basketball, and soccer programs are available.Performing arts camp for those 8 to 12 and an art camp for those 9 to 18.Kids can also make the trip to RAF Feltwell Aug. 20-21 for the Great American Campout.Preteens can hop in their socks at a dance at the end of summer.RAF Mildenhall:

Camps for tennis, volleyball, basketball, baseball, karate, cheerleading, gymnastics and skating.Weekly sessions in creative dance, ballet, tap and jazz dancing and orchestra.Crochet, sewing, general arts and crafts, scrapbook making, photo album creation and dough sculpture.Older children have a chance to make some money by helping on projects around the base.Ramstein:

Kids from 6 to 8 can participate in weeklong camps, including: travel, art, nature, science, water, sports, crazy (getting messy) and drama.Camps for those 9 to 12 include: crazy kid, drama, water fun, tech, art, Nickelodeon, reality show, sports and science.Half-day camps for a week for both age groups, including in-line hockey, swimming and outdoor adventure.For teens, there are weeklong camps offering a tour of a German city and activities near that city, such as exploring caves, visiting castles, swimming, rock climbing and biking. Cities include Bad Durkheim, Trier, Heidelberg, Mannheim, Worms, Frankfurt, Neustadt and Saarbrucken.Spangdahlem:

Newcomers can visit the teen center to find out what kind of activities there are to do on base July 6.Activities include six different club nights at the teen center and an all-night pajama party (for those ages 9 to 12) and a retro night.Other activities in July include twice-weekly art classes, Keystone and Torch club meetings, girls-only health classes and sign up for summer sports leagues.In August, trips are planned to Wolf and Eagle Park, the Cascades pool, Eifel Park and Eissporthalle (skating) for those 9 to 12.Teens can sign up for late-night basketball, visits to Walibi World Theme Park and Warner Brothers Movie World and underground club nights on Saturdays.Camps available for basketball, adventure sports, roller hockey and volleyball.NavyNaples:

The teen center at the Gricignano Support Site base offers such things as a Tekken Tag PlayStation2 video game challenge in which 3-D characters execute animated martial arts moves, and a three-on-three soccer contest.Carney Park Golf Course offers junior golf lessons and a golf tourney in July.The library offers two reading programs. Children ages 3 to 7, are Raptor Readers &#8212; books with a dinosaur theme &#8212; while those 8 to 13 will Get Wrapped up in Reading! for books with an Egyptian theme.Parents have signed up their children for the second annual Milan Junior Soccer Camp.Rota:

The youth center at Naval Air Station Sigonella runs weekly, themed camp adventures, like a Hawaiian week, in which kids attend luaus on the beach.For the first time, kids ages 3 to 11 can sign up for a dance workshop with the youth center that features six classes in the month of July and a culminating stage performance on Aug. 6.For youths 12 and up, dance classes such as teaching hip hop are available.The teen center offers ventures such as trips to the beach or go-cart racing and the library has an interactive youth summer reading program that includes a scavenger hunt one day and a youth Jeopardy tournament the next.ArmyDarmstadt:

Day camps take place from 9 a.m. to 6 p.m. all week long throughout the summer. These include trips to parks and museums, with special events, like a camp called Outrageous Contagious Fun during the week of July 11-15, which includes a day trip to a park, swimming in nearby city pools, and three days of camp counselor fun aimed at the weekly theme.Hanau:

Teens can learn about mechanics during a class at the Auto Skills Center.A host of sporting and fitness events, including different types of dance going through August.For kids age 6 to 17 years, Youth Services Instructional Classes include ballet, jazz, tap, hip-hop, along with other fitness and artistic outlets.Heidelberg:

Summer Bash at the Patrick Henry Village park July 4, which will include fireworks, games and food.Kaiserslautern:

Outdoor Recreation is offering all ages trips throughout the summer, including camping and fishing outings.Mannheim:

Summer Fest at the Benjamin Franklin Village bowling alley and Top Hat club parking lot from July 1-10. Fireworks, games, and rides will be available throughout the fest.At least twice during the day in August, children could take a field trip to the movies to help break the heat.Vicenza: