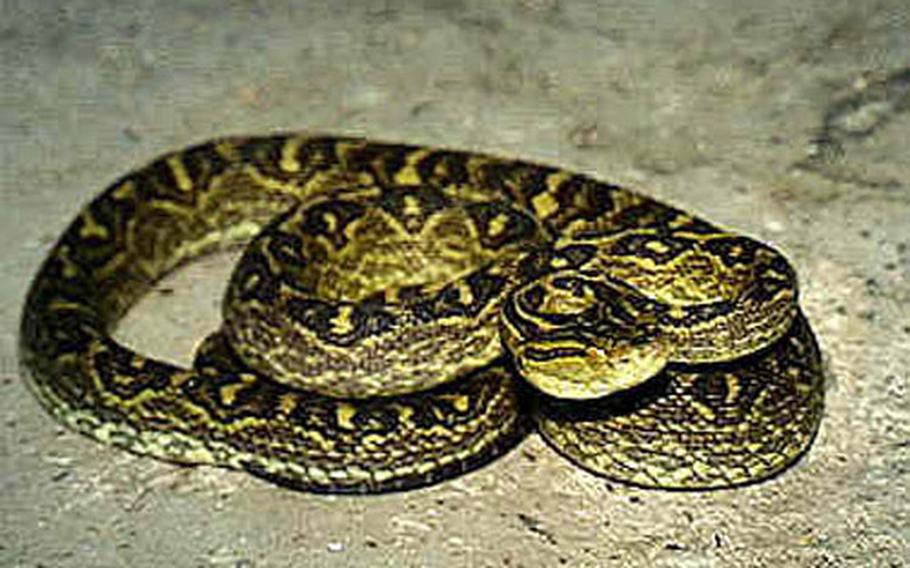 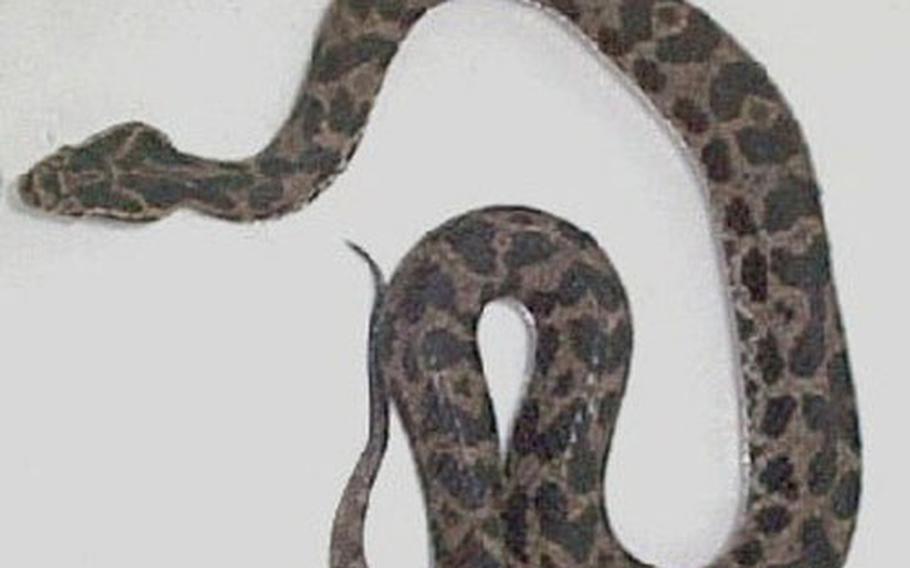 YOKOSUKA NAVAL BASE, Japan &#8212; With the onset of summer, specialists are warning that outdoor activities can bring you face to face with some of Japan&#8217;s poisonous native species.

Though encountering an 8-inch long mukade centipede is fairly common, the only deadly critters are the mamushi snake in the north and the habu snake on Okinawa, medical experts say.

&#8220;There are a lot of things that are venomous but those are the only two that regularly are fatal,&#8221; said Petty Officer 1st Class Joseph Paul, a preventive medicine specialist at U.S. Naval Hospital Yokosuka.

According to figures gathered by the hospital, about 3,000 snakebites are reported on mainland Japan each year. Usually, from three to five of those snakebites are fatal.

A third venomous snake, the yamakagashi, is found on mainland Japan and Okinawa but not Hokkaido, Paul said.

Paul said a recent study by Japanese hospitals found that eight of the 65 snakebites reported in urban areas occurred when people tried to prepare the snakes for either food or sake.

Habu-sake, a potent version of the popular Japanese alcohol, is a specialty on Okinawa.

Almost every bar has a giant glass jar of the powerful libation, of which Marines and soldiers often partake during a long night of drinking.

Other than on the bar shelf, you most likely will run across the snakes in back yards and wooded areas, officials said.

The snakes tend to live in moist, grassy areas or near water sources.

They do, however, often come out to open ground to sun themselves.

&#8220;They are active during the day, so it&#8217;s important to check your yard before you let your kids out to play,&#8221; Paul said. Most people who die from snakebites are either very young or very old, he said.

Both mamushis and yamakagashis are active between April and October; they have been spotted on every U.S. base on mainland Japan.

The mamushi is generally 12 inches to 25 inches long, with a distinctive triangular head. It has a dark, reddish-brown back with darker platter-shaped designs; its stomach is gray with long white stripes.

Yamakagashis normally are dark or greenish-brown with big black patches near the head and irregular black-and-orange patches along the body. They average around 3 feet in length.

The habu snake is a pit viper, generally growing to about five feet.

In Okinawa, habus are usually greenish or greenish-yellow with black spots on the back.

When SR-71s flew from Okinawa, locals nicknamed the planes&#8217; crews habu, because they thought the aircraft resembled the snake.

Medical officials say if you are bitten, stay calm and call an ambulance.

If possible without risking another bite, catch the snake for identification purposes to help determine if it is poisonous.

The warm summer weather means that some pests will seek shelter near or inside homes. The mukade centipede, which grows to around 8 inches, burrows under piles of leaves or dead bark.

Its bite is not fatal, except in the rare case when a person is allergic to its venom, said Petty Officer 3rd Class Akira Radke, also of the Yokosuka preventive medicine department.

Mukade are also known to infest houses through cracks and crevices in walls, he said. A more common version of house centipedes is around 1 inch long with wide legs. That centipede also is non-poisonous.

None of the variety of spiders native to Japan are venomous, Radke said.

While the waters off Okinawa can be a respite from the heat, it&#8217;s still important to be careful, officials say.

The habu jelly fish is about 4 inches long with tentacles that can spread as long as 60 inches; it&#8217;s found in most waters off Okinawa beaches. If stung, pour vinegar over the affected area. Carefully remove tentacles and cool the area with ice, medical officials advise.

See a doctor as soon as possible. Never rub the affected area, as it could spread the poison.

Other poisonous sea creatures around Okinawa include the lionfish, marine catfish, crown-of-thorns starfish and the stingray, said Morihide Maekawa of the Okinawa prefectural Pharmaceutical Safety and Public Health Office.