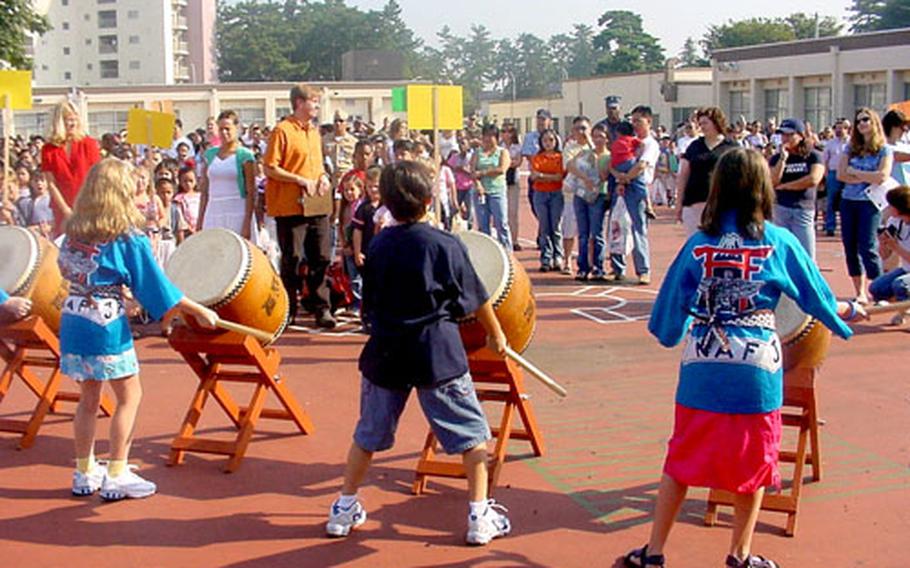 Four taiko drummers perform in front of Shirley Lanham Elementary School students, teachers and parents during the first-day-of-school ceremony at Naval Air Facility Atsugi. For more photos from schools across the Pacific, go to our . (Kelly Kirby / U.S. Navy)

Youngsters nervously hid behind parents and teachers kept order amid the chaos as the academic year began Tuesday for 24,000 students at 45 schools in Japan, Guam, Okinawa and South Korea.

On a bright, sunny morning at Misawa Air Base in northern Japan, about 1,400 students in grades one through 12 filed into Edgren high and middle schools and Cummings and Sollars elementary schools.

Parents, whether by walking their children to school or staying with them until the first bell rang, tried to ease those first-day jitters.

Third-grader Ariel Lee held her mother&#8217;s hand while walking down the sidewalk toward Sollars. She said she felt nervous.

John Williams, in his fifth year as Cummings principal after 23 years leading schools with Department of Defense Dependents Schools in Europe, said the first day of school never gets old.

Many students at Yokota Middle School in Japan were happy to be back, but not necessarily for academic reasons.

Eighth-grader Kimberly Reitzel was tackling her first day at Yokota Middle School. She and her family recently arrived in Japan from Wright-Patterson Air Force Base in Ohio.

Students at Sasebo Naval Base in southern Japan had the benefit of good weather to welcome them back.

&#8220;The weather was great, which allowed students to assemble on the tennis courts, where teachers held signs showing students where to congregate,&#8221; she said. &#8220;It was much better than last year when we had rain forcing us into the cafeteria.&#8221;

Sasebo Elementary is in its second year following the separation of E.J. King Unit School into the elementary, middle and high schools. Blevins said 187 students are enrolled.

On Okinawa, nearly 8,300 students returned to the classroom Tuesday.

At Stearley Heights Elementary on Kadena Air Base, students were welcomed back by the beat of a local taiko drumming group.

The school&#8217;s principal, Mona Morgan, told students it was going to be an education-packed, fun-filled year. Morgan also had various units from the Air Force and Navy sign adopt-a-school pledges in front of the students.

Lakeishia Troutman said she was &#8220;very happy&#8221; that school was back in session. She has two children at Stearley Heights: third- grader Dearvis and first-grader Kearia.

In South Korea, students and parents started showing up at Seoul American Elementary School on Yongsan Garrison a half-hour before classes started.

&#8220;I&#8217;m freaking out,&#8221; one girl said under her breath, smiling and pulling along a rolling backpack while surveying the school grounds.

Kemiya Jones, who turned 8 this week, is starting third grade. She and her grandparents moved to Seoul in May, and she couldn&#8217;t wait for her first day at her new school.

On Tuesday, Kemiya was too excited even to talk about how excited she was.

In teacher Jerilyn McCoy&#8217;s first-grade classroom, 21 students were learning where to put their glue, scissors, pencils and backpacks.