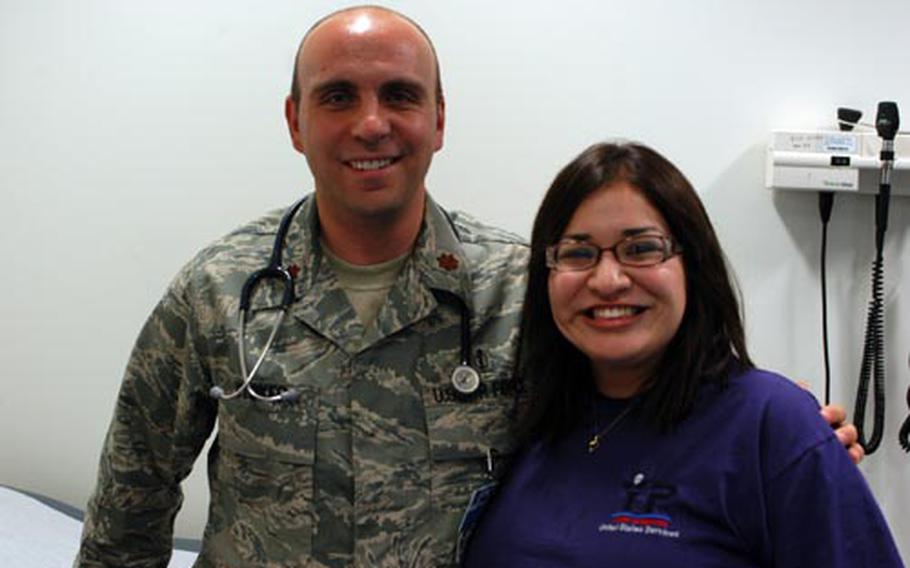 Brittny Cantero and Dr. (Maj.) Shayne Stokes pose for a picture at Lakenheath hospital on Cantero’s last day at the site. She was one of four National Youth of the Year ambassadors for the Boys & Girls Clubs of America who spent the summer at U.S. military installations around Europe. Along with working with children at the youth center, Cantero, who wants to be a pediatrician, was also able to do some job shadowing at the hospital. (Charlie Reed / S&S)

Cantero, 19, is one of four Boys and Girls Clubs of America National Youth of the Year ambassadors wrapping up the summer at U.S. military installations around Europe. Along with working at the base youth centers, they&#8217;ve also spent time exploring careers they hope to pursue.

After shadowing doctors at Lakenheath hospital last week, Cantero, a sophomore at Texas A&M University, now believes the military might be her ticket to medical school.

"I&#8217;m seriously considering it," said the Wharton, Texas, native. "I&#8217;m a first-generation college student so figuring out how I&#8217;m going to pay for medical school is a big concern."

"Before this I had really only known about the military from what I saw on TV," she said. "But to experience what it&#8217;s like to be a military doctor was eye-opening. I think the travel would be great too, and working with the kids of active-duty parents would be so rewarding."

And while Dr. (Maj.) Shayne Stokes &#8212; one of several physicians who hosted Cantero at the hospital &#8212; touted the benefits of the military in terms of both the work and as a means for funding medical school, he also emphasized the additional duties of active-duty docs.

"You&#8217;ve got to be willing to move and deploy," he said. "And then there&#8217;s the unique military obligations such as security clearances and readiness that we&#8217;ve got to maintain."

"But as far as medicine goes, there&#8217;s no better place to practice," said Stokes, who joined Air Force ROTC as an undergraduate to pay for medical school. Unlike most civilian hospitals, "we&#8217;re not driven to make money."

While she may only have been mentoring children instead of treating them while working at the youth center this summer, Cantero said the experience has been an enriching one.

"The spirit of these kids is awesome," she said. "I expected them to be down more because many of their parents are deployed, but they are amazing."

Still, some are struggling and that&#8217;s where Cantero said she felt most helpful.

"I can empathize. While I haven&#8217;t had any experience with what they are going through, I have had to overcome personal obstacles," she said.