Sullivans Elementary School sign has a long story behind it 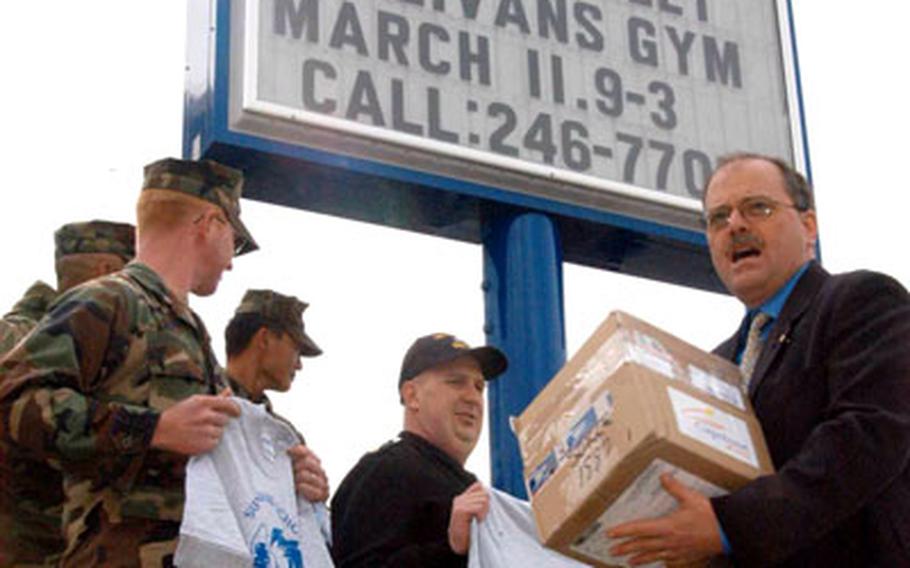 “It takes a community to raise a sign,” The Sullivans Elementary School principal Dave Russell said Monday. The effort to make, deliver and erect the school’s new sign at Yokosuka Naval Base involved a large cast of volunteers and ship- and shore-duty sailors. (Allison Batdorff / S&S)

YOKOSUKA NAVAL BASE, Japan &#8212; The USS Stethem had a huge souvenir in tow when the ship pulled into port at Yokosuka Naval Base last June.

It took up an entire parking space and could be moved only by forklift.

&#8220;We had no room for it, so we had to lash it topside,&#8221; USS Stethem Commanding Officer Cmdr. Robert Gonzales said Monday. &#8220;We lashed it twice, three times. Throughout the voyage, through storms and weather, we were always rushing up there to make sure it stayed put and stayed dry.&#8221;

The precious cargo was a sign &#8212; a swanky, new announcement sign for The Sullivans Elementary School. The ship, on its maiden voyage to its new home port, brought it over from San Diego.

It was nice to arrive bearing such a big gift, Gonzales said.

The idea started with a recommendation from Sullivans&#8217; School Advisory Committee that the school get a sign with changeable letters to better communicate with parents and the community. The Parent Teacher Organization agreed to fund it and ordered the sign from a Texas company.

Then, the plot thickened.

&#8220;Once the sign was ready, it was found that there was inadequate provisions to pay for the shipping,&#8221; said Trish Sorce, SAC vice president.

The sign cost about $3,000, Russell estimated. Shipping it to Japan likely would have doubled the cost, he said.

A couple other wrinkles appeared once the sign arrived. There was no funding to erect it, nor was there a good spot on school grounds to put it.

Through the cooperative efforts of the base&#8217;s Public Works Self-Help Department and Housing, a highly visible spot was acquired across from the commissary parking lot, and Self-Help&#8217;s branch of Seabees set the sign standing.