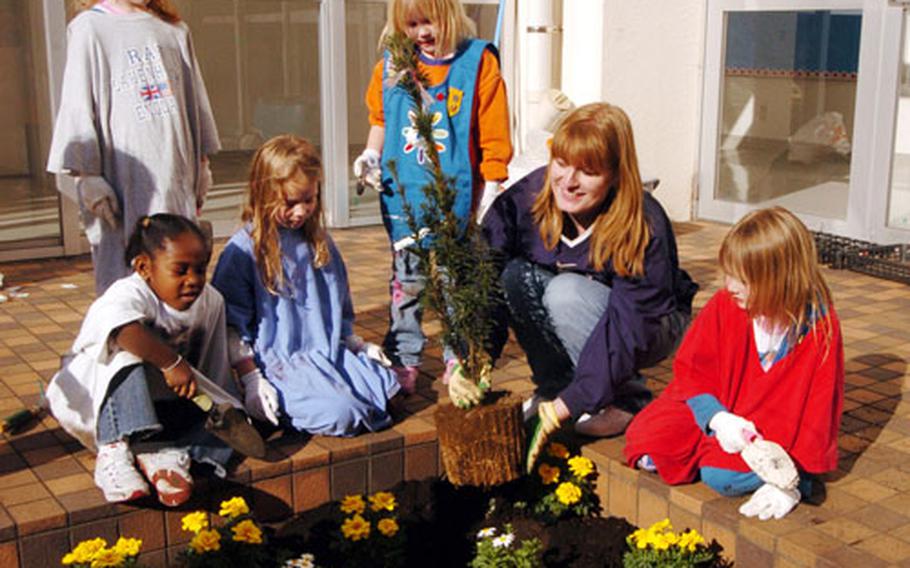 Kelly Sullivan Loughren helps Daisy Troop 37 plant a garden Tuesday at Yokosuka Naval Base. Sullivan is a descendant of the Sullivan brothers who died in World War II. (Christopher B. Stoltz / S&S)

Kelly Sullivan Loughren helps Daisy Troop 37 plant a garden Tuesday at Yokosuka Naval Base. Sullivan is a descendant of the Sullivan brothers who died in World War II. (Christopher B. Stoltz / S&S) 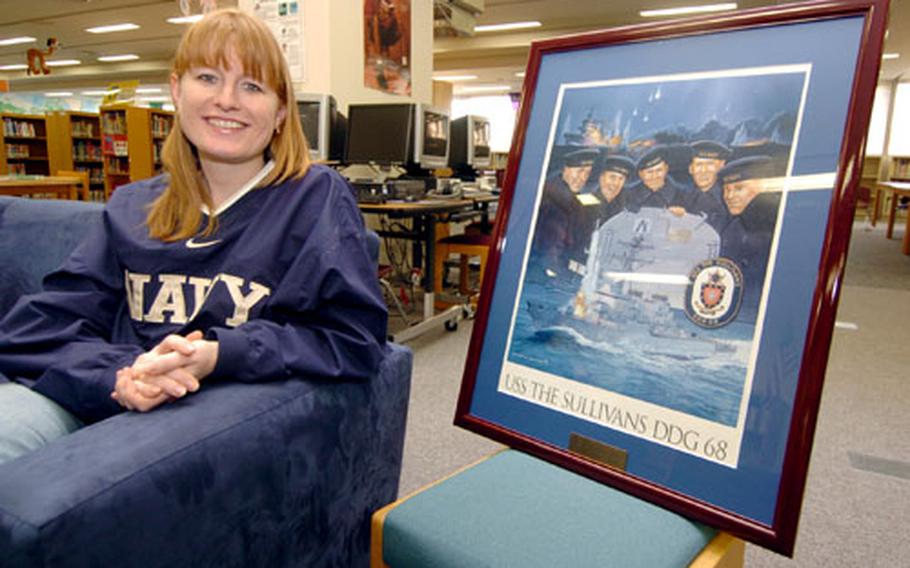 Kelly Sullivan Loughren, with a portrait of her grandfather and his brothers. (Christopher B. Stoltz / S&S)

YOKOSUKA NAVAL BASE, Japan &#8212; The Sullivan brothers didn&#8217;t join the Navy to be a part of history. They joined the Navy to pick a fight.

Sitting in the library of The Sullivans School at Yokosuka Naval Base, Mrs. Kelly Sullivan Loughren, daughter of the only child of any of the brothers, sat next to a picture of the five siblings in their Navy uniforms.

Loughren was at the school to help the children around her understand that the legacy of the Sullivan boys is not one of loss, but one of commitment, loyalty and sacrifice.

According to Loughren, the brothers became minor celebrities due to the media coverage generated by their insistence to serve together.

Albert, Madison, Joseph, Francis and George Sullivan were assigned together aboard USS Juneau. The brothers were aboard the ill-fated ship as it sailed into battle off of the island of Guadalcanal. None would return.

&#8220;What is truly remarkable is not that five boys were lost, but what happened afterward,&#8221; said Loughren.

On January 11, 1943, Loughren&#8217;s great-grandfather, Thomas Sullivan, and his wife, Alleta, received the news of the catastrophic loss. USS Juneau had been sunk. All five of their children were missing in action in the South Pacific.

The family motto of &#8220;We stick together&#8221; had been widely publicized in the media. What few could have guessed is just how deep that sentiment ran.

The Sullivan family had gone to war, and they meant it.

&#8220;My great-grandfather was a train conductor for Central Railroad, which was involved with moving war supplies to the sea ports of the East coast,&#8221; Loughren said. &#8220;The same day he was told about his sons, he reported for work to continue doing his part to win the war.&#8221;

Loughren said that her family legacy is centered on sticking together as a family and commitment.

The family&#8217;s patriotism, loyalty and sacrifice resonated with then-President Franklin Delano Roosevelt, who ordered that the next commissioned ship be named after all five brothers. The USS Sullivans would become the first Navy ship named after more than one person.

Since that fateful day in the South Pacific, the Sullivans&#8217; name has represented more than a family or event. For some, it represents the belief that ordinary people in extraordinary circumstances can overcome unimaginable tragedy through preservation and commitment.

According to The Sullivans principal, Dave Russell, Loughren&#8217;s visit was important because for the students and faculty, it helped to bridge a gap between something that happened long ago and a belief that is as relevant today as it ever has been.

&#8220;She made the tradition of the Navy, and life in the Navy, something that could be understood,&#8221; Russell said. &#8220;You could see the children sit a little taller in their seats as she spoke. She helped everyone understand that being a part of the Navy is a good place to be.&#8221;