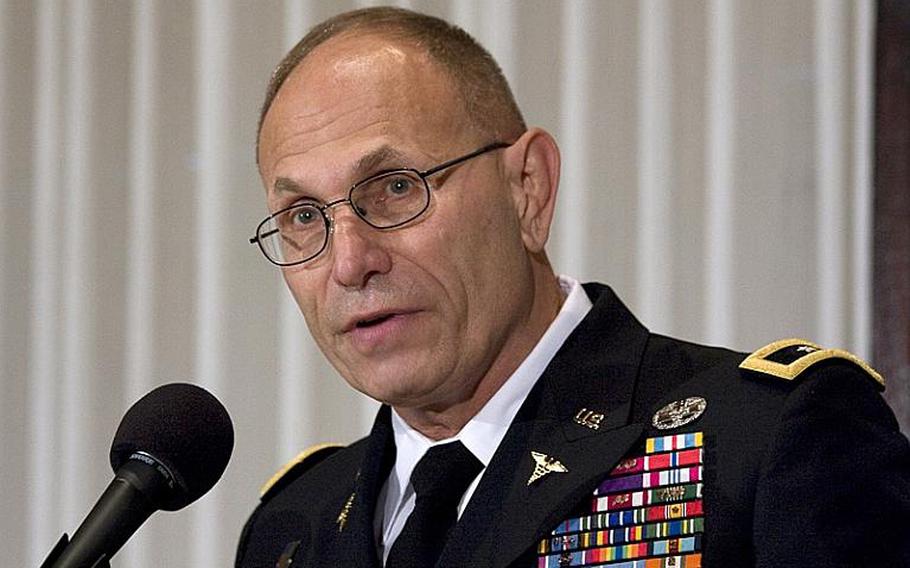 Dr. (Maj. Gen.) Philip Volpe, co-chairman of the Defense Department Task Force on the Prevention of Suicide by Members of the Armed Forces, speaks at a press conference at the National Press Club in Washington, D.C. (Joe Gromelski/Stars and Stripes)

WASHINGTON &mdash; A lack of coordination by the Pentagon and the rush by each service to develop suicide prevention programs have led to scattershot initiatives that overlap in some areas and have significant gaps in others, according to a report released Tuesday by a congressionally mandated task force on suicide prevention in the military.

The yearlong review by the 14-member panel culminated in 76 recommendations that range from specific actions, such as creating an overarching Defense Department suicide prevention office, to sweeping, wistful suggestions like &ldquo;decreasing operational commitments.&rdquo; The report lists whose responsibility it should be to implement each recommendation, and Congress gets the nod for reducing stress on the force.

&ldquo;There are strategic leaders in our nation who need to look at supply and demand,&rdquo; Volpe said, because there&rsquo;s a &ldquo;mismatch&rdquo; with the number of troops and the operational tempo.

The task force, which was half military and half civilian, reviewed each service&rsquo;s policies, examined data, visited 19 bases, and talked to more than 2,000 experts, servicemembers and family members. The findings were submitted to Defense Secretary Robert Gates, who will report to Congress about the recommendations within 90 days.

Although the task force lauded the services&rsquo; urgency in preventing suicide, the report found that &ldquo;this rush to deploy critical programs&rdquo; led to initiatives with both overlap and gaps, resulting in inefficiencies and missed opportunities for prevention. The report concluded that &ldquo;evaluation is sorely needed for every initiative and program implemented by the services,&rdquo; but the task force did not do any such grading because &ldquo;a gold standard has not been established for evaluation.&rdquo;

The task force recommends that the Pentagon develop a comprehensive strategy rather than giving discretion to the individual services. It called for much more standardization with policies, in particular for how suicide investigations are conducted. It also said it is imperative to collect more data and funnel it to the Office of the Secretary of Defense to help guide improvement of prevention programs.

Simple questions, such as whether there is a correlation between military specialty and suicide risk, can&rsquo;t be answered because the data isn&rsquo;t collected, the report found.

The task force said leadership in garrison needed work. It found that junior leadership wasn&rsquo;t always on board, leading to &ldquo;discriminatory and humiliating treatment&rdquo; of servicemembers who sought help.

Army Col. John Bradley said the task force heard many stories about people being singled out in formation and publically ridiculed.

&ldquo;What we have to ask ourselves is are we giving [young leaders] the skills to manage and take care of the whole person,&rdquo; Volpe said.

Some of the task force recommendations include: more skill-based training, including for families; a standard and systematic medical documentation system to identify and track high-risk patients and the care they receive; an integration of behavioral health treatment into primary care settings to help reduce stigma; zero-tolerance policies regarding humilation of or discrimination against those seeking help.