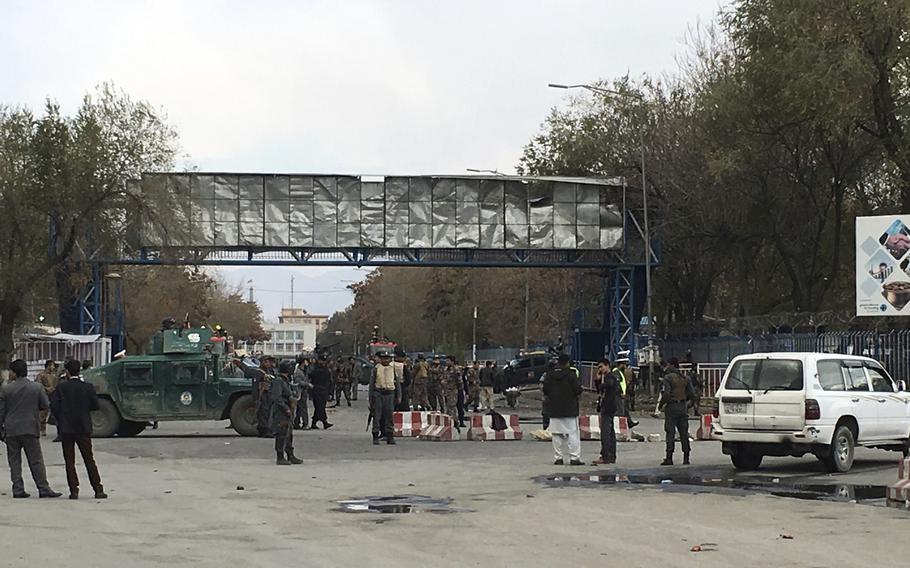 Security forces inspect the site of a suicide attack in the capital of Kabul, Afghanistan, Monday, Nov. 12, 2018. Afghan officials confirm at least three people killed in a blast happened near a high school and the Kabul municipality office while hundreds of people gather to protest against Taliban attacks in Jaghuri and Malistan districts of eastern Ghazni province. (Massoud Hossaini/AP)

KABUL, Afghanistan — A bomb blast ripped through Kabul in an area where hundreds of Afghans had been protesting insecurity in the country.

The Islamic State’s regional affiliate, known as ISIS-Khorasan, claimed responsibility for the attack on social media. Video and photos posted by local media show several bodies strewn across the street in front of the Kabul mayor’s office.

The bomb blast went off near where protestors had gathered to demand that the Afghan government take action to repel a Taliban offensive in the southeastern provinces of Ghazni and Uruzgan, local news agency Pajhwok reported.

Over the past week, militants launched attacks in three districts home to many Hazara – a minority group that has faced years of persecution, including under the Taliban.

Almost 100 soldiers, including 50 elite commandos, have been killed fighting a Taliban onslaught in Ghazni recent days, according to the New York Times.

Since the NATO-led coalition transition from a combat mission to one focused on training and advising government forces, the Taliban have shown overall territorial gains, a government watchdog has found.

The government’s control or influence of the country’s districts in July reached its lowest level since the U.S. began tracking district control in November 2015, said the latest report by the Special Inspector General for Afghan Reconstruction.

Recent Taliban attacks threaten districts long seen as among the safest in Afghanistan, the Times reported.

Many protestors in Kabul Monday told reporters from TOLO News they marched on behalf of their besieged relatives in Ghazni and Uruzgan.

The bomb blast went off just as the protestors were dispersing, according to local media.