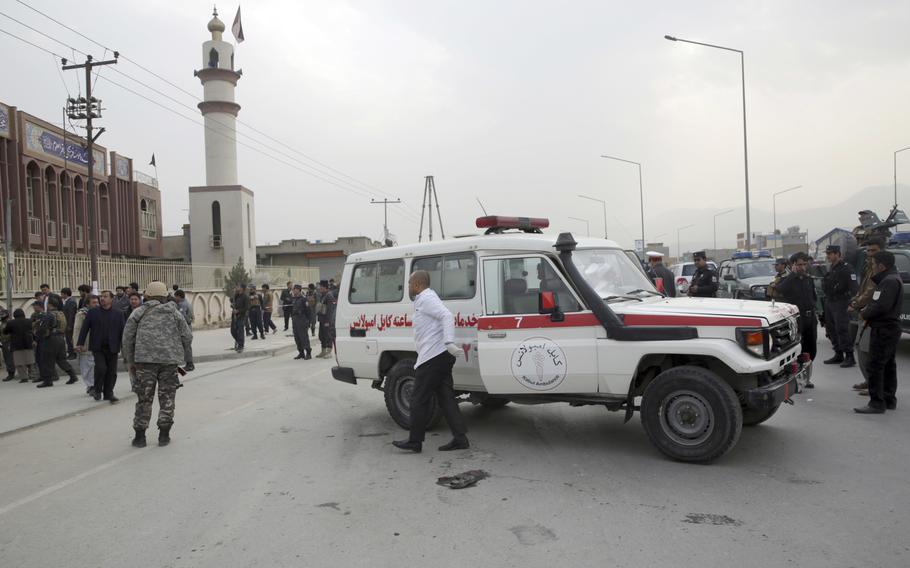 Afghan security forces, first responders and civilians walk around the Shiite Baqir-ul Ulom mosque after a suicide attack inside it, in Kabul, Afghanistan, Monday, Nov. 21, 2016. An Afghan official says that dozens of civilians have been killed after a suicide bomber attacked a Shiite mosque in the capital. (Massoud Hossaini/AP)

KABUL, Afghanistan — A suicide bomber killed 30 people at a Shiite mosque in the Afghan capital on Monday, officials said, a month after the Islamic State group claimed responsibility for two attacks targeting Shiite worshippers in this predominately Sunni country.

The Islamic State affiliate in Afghanistan also claimed responsibility for Monday’s attack, according to the SITE Intelligence Group, which monitors militant postings.

The blast wounded scores of others, including women and children, said Faredoon Obiadi, head of criminal investigations for the Kabul police.

The attacker was on foot and detonated a suicide vest on the first floor of the Baqir-ul Ulom mosque in the west of the capital while worshipers attended a religious ceremony, Obiadi said.

Hussain Kazemi, a shopkeeper who works about 100 meters from the mosque, rushed to the scene after hearing the explosion. “I went to the mosque to help the wounded after the blast, but I could not help because there was blood everywhere and I got sick,” he said.

Thirty people died in the blast, the Interior Ministry said in a statement.

Sectarian attacks have been rare in Afghanistan; however, the Islamic State group, which considers Shiites apostates, has claimed responsibility for a spate of violence targeting followers of the sect throughout the country this year.

Last month, during the Shiite festival of Ashura, a mass shooting at the Karte Shakhi mosque in Kabul left at least 16 worshipers dead. A day later, an explosion at a Shiite mosque in northern Balkh province killed at least 14. Islamic State said it was behind both attacks.

The group also claimed twin bombings on a protest by minority Shiite Hazaras in Kabul in July that killed 84 people, the deadliest attack in the capital since a U.S.-led invasion removed the Taliban from power in 2001.

The United Nations mission in Afghanistan condemned Monday’s bombing, describing it as the “latest effort by extremists to stoke sectarian violence” in the country.

“These are just the efforts of Afghanistan’s enemies to create sectarian tension and use the situation for their own goals, whether it is Daesh or others,” said Gen. Nazeefa Zaki, using an Arabic acronym for the Islamic State group.

“There are Sikhs and Ismailis in Afghanistan and many other groups, but they are not attacked,” said Zaki, a member of parliament. “There are tensions between Sunni Muslims and Shiites in Iraq, Syria and Pakistan. The enemies want to have the same situation in Afghanistan, too.”