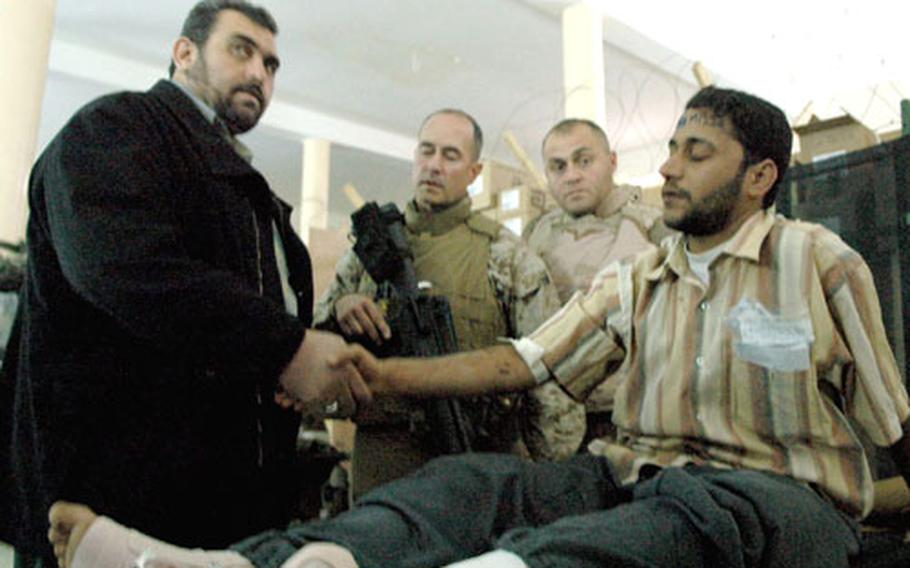 The provincial governor of Anbar visits wounded Iraqi police recruits at a combat hospital on the U.S. base in Ramadi. (Monte Morin / S&S)

The provincial governor of Anbar visits wounded Iraqi police recruits at a combat hospital on the U.S. base in Ramadi. (Monte Morin / S&S) 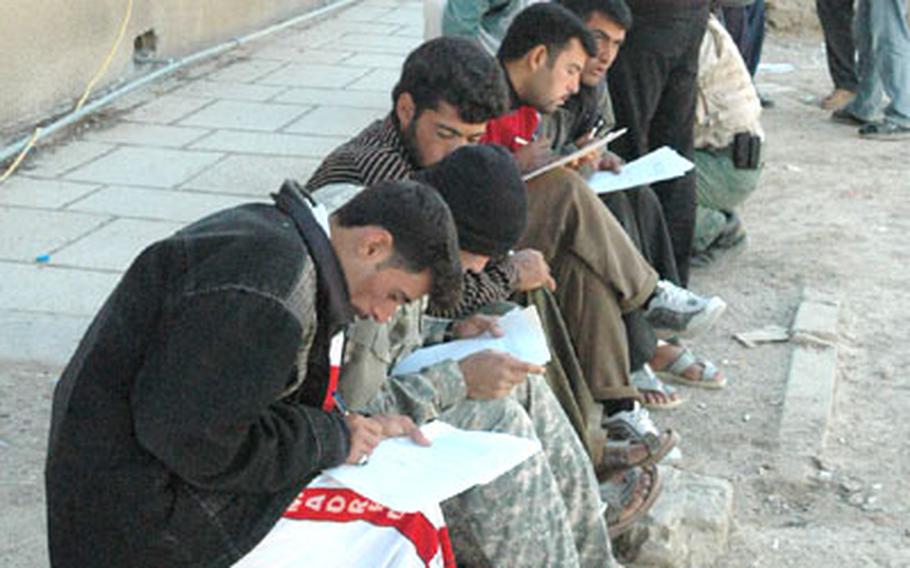 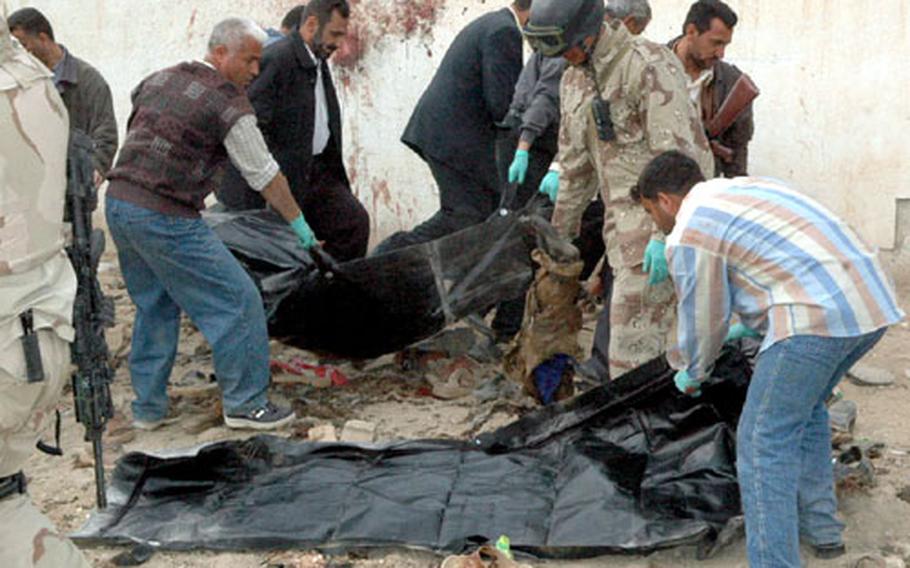 Rescue workers respond to the scene of Thursday&#39;s suicide bombing in Ramadi. The attack targeted a crowd of Iraqi police recruits, and killed two U.S. servicemembers and at least 27 recruits. (Monte Morin / S&S) 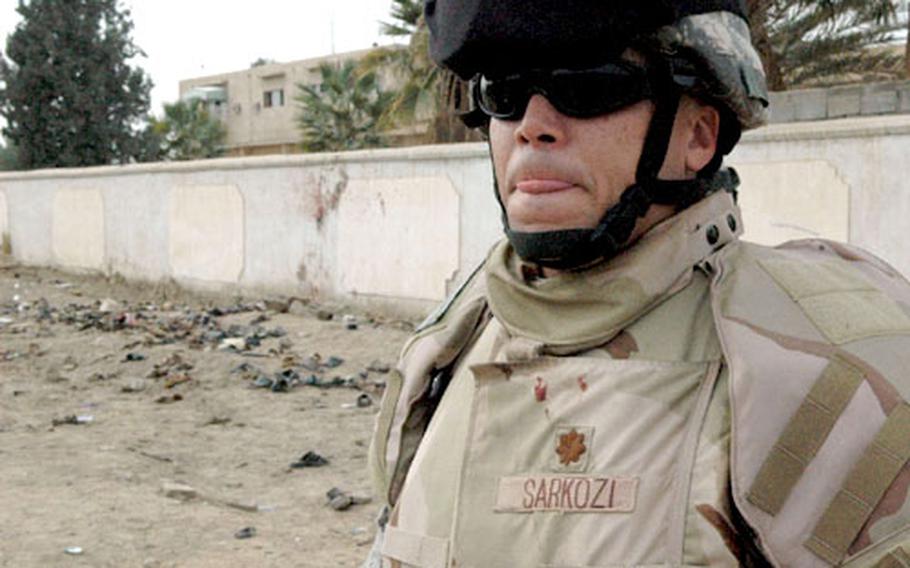 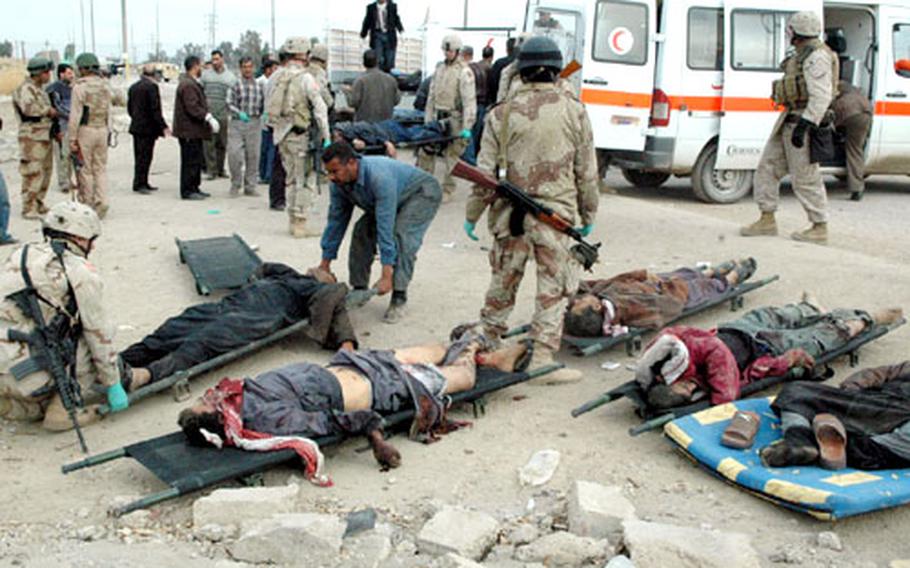 RAMADI, Iraq &#8212; A U.S. soldier and a Marine were among the dead Thursday after a suicide bomber detonated his explosive vest at a crowded police recruiting drive here, killing at least 27 recruits and injuring 30 others, according to the commander of the U.S. Army&#8217;s 2-28 Brigade Combat Team.

The attack occurred on the last day of a four-day screening drive during which more than 1,100 men volunteered to help revive this violent city&#8217;s defunct police department. The bomber detonated the vest amid a crowd of Iraqi men who were waiting to be searched for weapons outside the wall of the sprawling Ramadi Glass Factory.

The Associated Press reported 56 people had been killed and 60 injured, based on numbers provided by a doctor at Ramadi General Hospital.

Col. John L. Gronski, who was in the area just moments before the suicide bomber struck, said he joined the crowd of recruits, Iraqi security personnel and soldiers and Marines who heard the explosion and saw flames and smoke from behind the wall before running to help the injured.

The U.S. servicemembers killed were among the team screening applicants and providing security, Gronski said. Their names are being withheld until their families have been notified.

Less than an hour after the attack, scores of sandals, boots and shoes lay scattered among pools of blood, dead bodies and severed limbs. As recruits, soldiers, Marines and Iraqi security forces carried away the dead on litters, mattresses and body bags, those recruits who survived the blast said they were as committed to joining the Iraqi police as they were before the bombing.

Ramadi&#8217;s police department collapsed last year due to corruption and an insurgent campaign to assassinate or intimidate patrolmen. While past efforts to reconstitute the police force have drawn only small numbers of men, this drive followed several weeks of meetings among local tribal leaders, government officials and U.S. military commanders. The result was that local sheiks gave young men their consent to join the force, and promised coalition forces that they would use their influence to prevent or deter insurgent attacks.

The fact that an attack did occur on the last day of the drive surprised those men who assembled at the glass factory.

He and others speculated that the deed was committed by foreign terrorists.

&#8220;This was not done by an Iraqi,&#8221; said Adnan Saleh, a former Iraqi police officer who waited several days before he was screened and accepted.

Saleh said he was not deterred by the violence either. &#8220;Some people will be courageous, they will be defiant.&#8221;

U.S. military commanders also suspected that the attack was committed by foreign fighters, and said it was the first such suicide attack to target Iraqi civilians in the area.

&#8220;We&#8217;ve never seen an attack like this in Ramadi,&#8221; said Marine Maj. Robert Rice, who oversees the Police Partnership Program and its effort to recruit new police officers.

&#8220;This was probably done by a foreign al-Qaida in Iraq element. Hopefully, it will become a rallying cry for the citizens of al-Anbar to defeat the terrorists &#8230; Ramadi is the decisive city in the province. If we get Ramadi right, the rest of the province will follow.&#8221;

The wounded were rushed to Charlie Medical Company of the 2-28 at Camp Ramadi. After visiting the glass factory and talking to officials there, Provincial Governor Ma&#8217;Moun Sami Rasheed visited wounded recruits and also viewed those in the medical center&#8217;s morgue.

&#8220;What happened here today is a crime against humanity,&#8221; Rasheed told reporters at the medical center. &#8220;How can we have such a thing happen to people who are trying to protect their country and its people against crime?&#8221;

After talking with wounded recruits, the governor said he was confident that local men would continue to join the Iraqi police force, despite such attacks.

U.S. officers had said on Tuesday that they believed the agreement with the sheiks was a &#8220;sea change&#8221; in attitudes and a historic opportunity in Ramadi.

The recruitment drive had drawn almost 600 applicants by its second day Tuesday and more than 1,000 on Thursday, as many former police officers and a few suspected insurgent spies answered the call, U.S. military commanders said.

Recruitment drives by the Iraqi police and Iraqi army have been targeted before. On Tuesday, U.S. officers had speculated that some insurgents were participating in the effort so that they could glimpse security measures within the compound or undermine the Iraqi police from within.

&#8220;Of that group of 150 right there, 10 of them want us dead,&#8221; said Marine Capt. John LaJeunesse, executive officer of the provincial Police Partnership Program.

The literacy rate in Iraq&#8217;s western Anbar province stands at roughly 30 percent to 40 percent, LaJeunesse said, and a basic reading and writing test was one of the first hurdles prospective officers had to face.

Recruits also were required to run roughly 100 yards, do a set number of push-ups and sit-ups, fill out personal work and residence histories and submit to fingerprinting and retina scans. They also were given brief physical exams.

Anywhere between 200 and 350 of the men who are selected during this recruiting drive will be sent to the Iraqi Police Academy in Baghdad, where they will undergo additional screening, LaJeunesse said.

The history of Iraqi police in Anbar province &#8212; the heartland of the Sunni Triangle &#8212; has been a tumultuous one. Late last year, the provincial police general was arrested on suspicion of collaborating with the insurgents, money laundering and other crimes. And prior to the department&#8217;s complete collapse in Ramadi, police commanders would extort payments from officers to stay on the force &#8212; all but ensuring that the worst officers remained in power.

Among those men who showed up Tuesday for the recruiting drive were three former Ramadi police officers. All three said they were among the 6,000 officers fired last fall in a purge of the department. They said they were fired because they could not afford to pay their commanding officer the $400 bribe necessary to stay on the force.

&#8220;We are very happy to be here and grateful to the Americans because now the application process is very direct,&#8221; said Ismael Darfesh, 31.