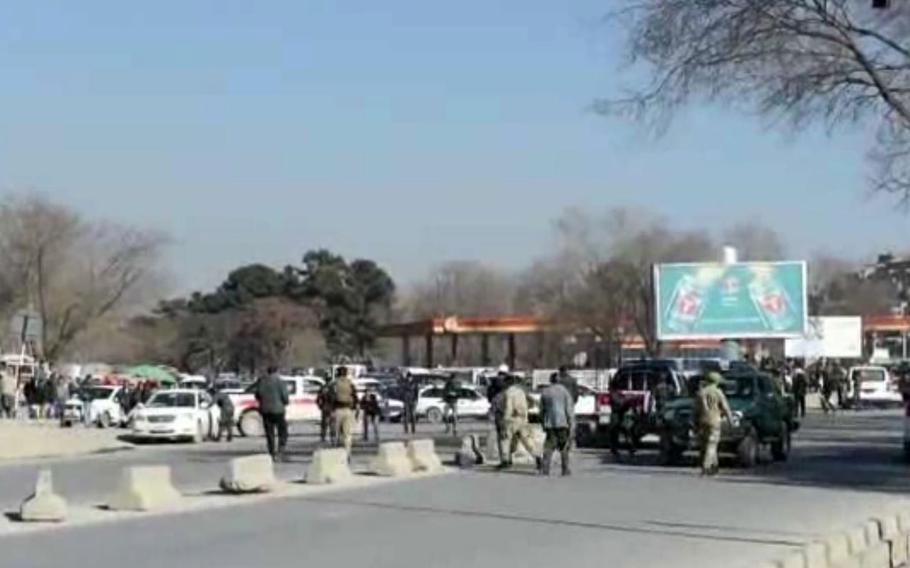 In this video still image, authorities assess the damage at the blast scene which occurred at the entrance of the National Civil Order Police in western Kabul, Najeed Danish, an Interior Ministry spokesman said. (NDN Video still)

KABUL — A suicide bomber who tried to penetrate the compound of an elite police unit killed 20 officers and wounded 32 other people on Monday, in the bloodiest attack in the capital since the start of the year, officials said.

The blast, which came as authorities have been trying to restart stalled peace talks with Taliban insurgents, occurred at the entrance of the National Civil Order Police in western Kabul, Najeed Danish, an Interior Ministry spokesman said.

"Targeting those who defend their fellow Afghans does not advance the cause of peace,” Brig. Gen. Wilson Shoffner of Resolute Support said in the statement.

The Taliban immediately claimed responsibility for the bombing and said in a statement that they killed or wounded 40 policemen.

The civil order police is an elite paramilitary unit that is part of the national police force. It has been trained by European gendarmerie instructors for rapid interventions, and has reportedly thwarted a number of Taliban attacks in Kabul and other cities.

In a statement, Abdullah urged the “armed terrorist groups” to take part in negotiations rather than continue carrying out suicide attacks.

Efforts to revive the peace process, which has been stalled since last summer, have been going on since Jan. 11 when Afghan government representatives met with diplomats from the United States, Pakistan, and China to set out a road map for talks with the Taliban. The four-country group held a second meeting on Jan 18.

Meanwhile, representatives of the Taliban and Afghan officials and lawmakers met on Jan. 23-24 at an informal gathering in the Qatari capital of Doha to discuss the peace process.