Vehicles, some confiscated by police, are stacked after being crushed at an East Anglian junkyard. Drivers in Suffolk County who have no insurance risk having their cars crushed as part of a program launched Aug. 31 by the Suffolk Constabulary. (Sean Kimmons / S&S)

Vehicles, some confiscated by police, are stacked after being crushed at an East Anglian junkyard. Drivers in Suffolk County who have no insurance risk having their cars crushed as part of a program launched Aug. 31 by the Suffolk Constabulary. (Sean Kimmons / S&S) 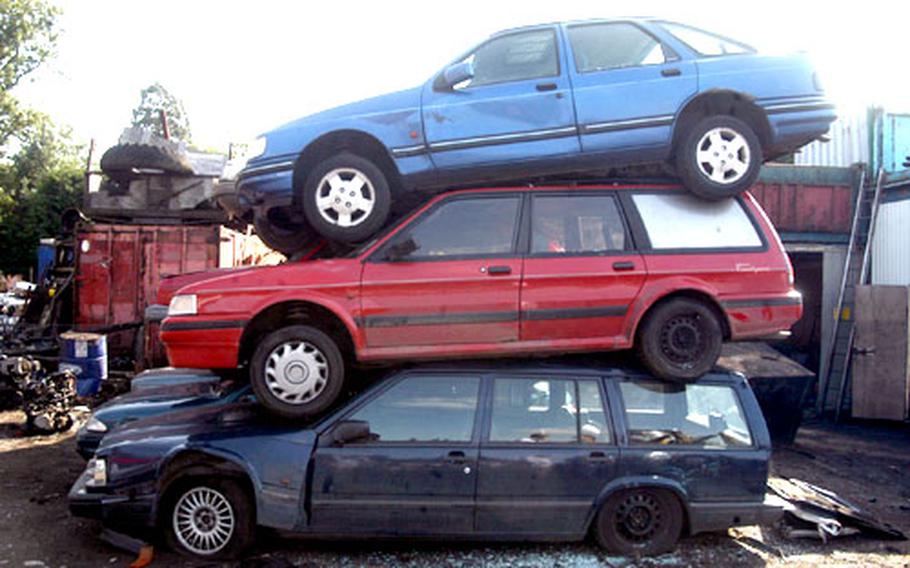 CHARSFIELD &#8212; Here in the quiet hills of this Suffolk village &#8212; amid the debris of so many autos gone south &#8212; a new police campaign to punish uninsured drivers comes to life with the sounds of twisting metal and breaking glass.

Twice a week Derek Spall and his team of junkyard mates use the engine of a retired English lorry to power an American-built compactor that crushes cars by the bushel, including at least three or four delivered weekly by the Suffolk Constabulary.

The fervor to crush perfectly capable cars is part of a widespread effort by the constabulary to prompt drivers to get insured or face serious consequences.

The program was launched Aug. 31 after a three-month pilot program resulted in more than 50 percent of the seized cars being crushed, according to Suffolk Constabulary spokeswoman Lisa Miller.

From Jan. 1 to March 31, Suffolk authorities took possession of 110 vehicles and crushed 57 after the owners failed to show proof of insurance and did not pay a fine, recovery charge and storage fees within 14 days after the car was seized.

The campaign also netted the arrest of 10 people on outstanding warrants, Miller said.

Police use a device known as an automatic number plate recognition to flash passing vehicles, much like a radar gun targeting speeders. If the plate returns as uninsured, the driver is pulled over and the vehicle is seized.

Spall said he&#8217;s crushed all types of vehicles for the police, including some BMWs.

In the United States, law enforcement agencies at the local, state and federal level often auction seized vehicles and funnel the funds into police outreach activities or anti-narcotics operations.

In Suffolk, cars worth at least a certain amount are auctioned, according to Suffolk Constabulary Sgt. David Griffiths, who runs the program. The rest are crushed.

Spall said some people have spotted a decent-looking car in front of his compound and inquired about buying it.

After the cars are crushed, Spall&#8217;s staff loads them onto a flat-bed trailer for shipment to a recycling facility.