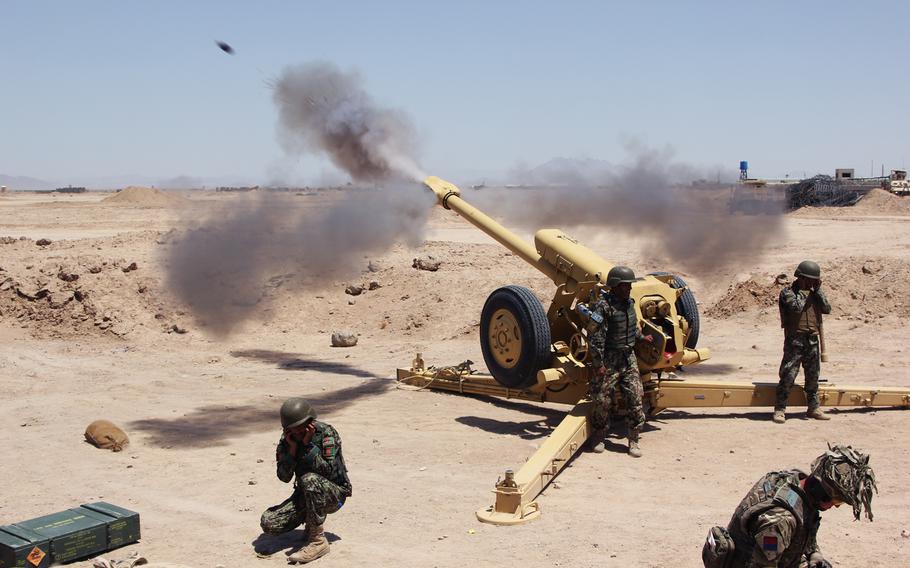 KABUL — The current battle for a region of southern Afghanistan highlights some of the lingering issues that may dog Afghan forces well into the future, even as a counterattack by Afghan troops is pushing back the Taliban offensive that threw the area into chaos.

Afghan officials say coordination among their forces in Helmand province has been effective, but the sudden onslaught by hundreds of militants remains a worrying sign, particularly after the stunning collapse of the Iraqi army in the face of a brazen attack by a large force of Islamic jihadists.

U.S. officials have watched in consternation as troops in Iraq, which were also trained and equipped by American advisers, dropped their weapons and fled rather than stand and fight the militants.

While the situations in the two countries remain distinct and unique, the failures of local forces in Iraq hang over the debate about what aid Afghanistan will need to prevent insurgent groups from regaining influence.

Operating on their own, Afghan soldiers and police appear to have blunted the Taliban thrust but at a high cost that is still rising. And the limited but significant international assistance, such as intelligence and air support provided to Afghan forces in Helmand, underlines the remaining gaps in their capabilities.

In the pre-dawn hours of June 20, Taliban forces used the cover of darkness to attack checkpoints across the Helmand province district of Sangin, which was vacated by U.S. Marines only last month, according to district governor Sulaiman Shah.

“After that the serious fighting started between the security forces in the area and the insurgents,” he told Stars and Stripes. “The clashes have continued until now, although the violence has gone up and down.”

The government counteroffensive coincided with an influx of assistance from the NATO-led International Security Assistance Force.

ISAF said in a statement: “We have continued to provide the following military support to Afghan National Security Forces over the past 72 hours in Northern Helmand Province: helicopter escort to ANSF MEDEVACs; intelligence, surveillance and reconnaissance assets; and close air support.”

ISAF officials reiterated that “this remains an ANSF-led operation.”

Still, the support provided by ISAF during the fighting underlined the warnings by analysts who say Afghan forces will need help with air support, intelligence and other logistics for years to come, long after the withdrawal of U.S. and NATO combat troops at the end of this year.

“We conclude that international support (to include the presence of advisers) will be required to address the gaps in mobility, logistics, air support, intelligence gathering and analysis, and training of specialty skills through at least 2018,” concluded a U.S. Defense Department-sponsored report released in January.

President Barack Obama announced in May that 9,800 American troops, most of them advisers, will remain in Afghanistan after 2014 if an agreement is reached with the Afghan government. That number will drop steadily until the end of 2016, when only a small contingent based at the U.S. Embassy in Kabul is to remain.

“A recurring theme in meetings with Afghan officials was concern about ANSF shortcomings in logistics, air support, intelligence and other technical aspects of modern security operations sometimes known as ‘enablers,’” the International Crisis Group said in a recent report. “Enablers for Afghan operations are not only a matter of day-to-day requirements, they are also necessary for the long-term struggle to maintain morale and cohesiveness among the ranks.”

The fighting in Helmand, which eventually may have included as many as 1,000 militants, initially spread beyond Sangin to areas in Nawzad and Kajaki districts, said Abdul Ahad Chopan, a spokesman for the Helmand provincial police.

Over the past three days or so, government reinforcements have been rushed to the area, and Chopan said the violence had died down in Nawzad and Kajaki. “Overall, the ANSF is in better control of the fight,” he told Stripes.

But Chopan said the battle continued in Sangin. Overnight a Taliban attack on a checkpoint and the subsequent counterattack left seven people dead; a bomb killed five civilians; and insurgents reportedly burned the homes and killed several relatives of local policemen.

Casualty reports remain vague, but Afghan officials claim as many as 150 Taliban have been killed, along with more than 30 government soldiers and police. More than 50 civilians are reported to have perished, mostly by improvised bombs, and thousands of families have fled the fighting.

Taliban spokesman Qari Yousaf Ahmadi issued his own tally of casualties: 200 ANSF and only seven Taliban killed. He also claimed that foreign armored vehicles were destroyed, but both coalition and Afghan officials say no international ground troops were involved.