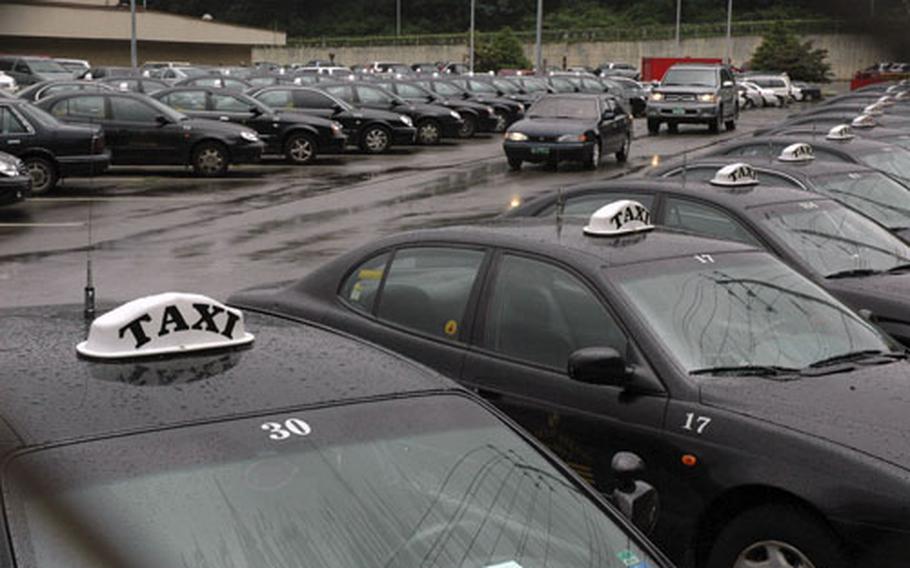 A strike on Yongsan Garrison on Saturday by drivers for the Worldcup Arirang Tourism Co. Ltd., which contracts with AAFES, caught many by surprise. At the commissary, 47 taxi cabs sat idle while hundreds of people shopped. (Teri Weaver / S&S)

YONGSAN GARRISON, South Korea &#8212; Soldiers on Yongsan Garrison said they felt as if they were left standing in the rain, literally, when on-base taxi drivers went on strike early Saturday morning with no warning to the community.

Stars and Stripes learned late Friday night that Worldcup Arirang Tourism Company Ltd. taxi drivers and dispatchers for Area I had gone on strike earlier that evening and that Area II employees would follow suit at 6 a.m. Saturday.

Many Yongsan residents stood in vain at the taxi stops Saturday until the news began to travel by word-of-mouth. By late afternoon, signs had been posted at the major taxi stops, including one outside the Army and Air Forces Exchange Service store.

That wasn&#8217;t much consolation for Nicosia, who had traveled to Yongsan from the Daegu area so she could have a surgical procedure completed at the hospital on Friday. Early Saturday, she was supposed to take a taxi back to the 121st General Hospital for a follow-up appointment. Instead, she said, she was forced to hike halfway across the post through the rain.

But a driver and a union official who talked to Stripes on Friday night said they&#8217;re striking because their bosses won&#8217;t give them a pay raise. Arirang is contracted through AAFES to provide the only authorized on-base taxi service in areas I and II. No off-base taxis are allowed on U.S. Forces Korea installations.

The driver, Bae Sam-jin, said employees only make about $400 per month, plus about $170 in overtime. For each dollar drivers make in fares over a quota of $87 per shift, they keep half. Bae said drivers average about $115 in fares daily, which means they take home an extra $14 a day. The drivers also make tips.

After learning how the drivers are paid, Spc. Adalberto Echevarria said he didn&#8217;t think the drivers should strike.

But he didn&#8217;t appreciate the lack of notice.

Pfc. Amanda McArthur offered a one-sentence response that seemed to sum it up for most of the people who were affected Saturday.