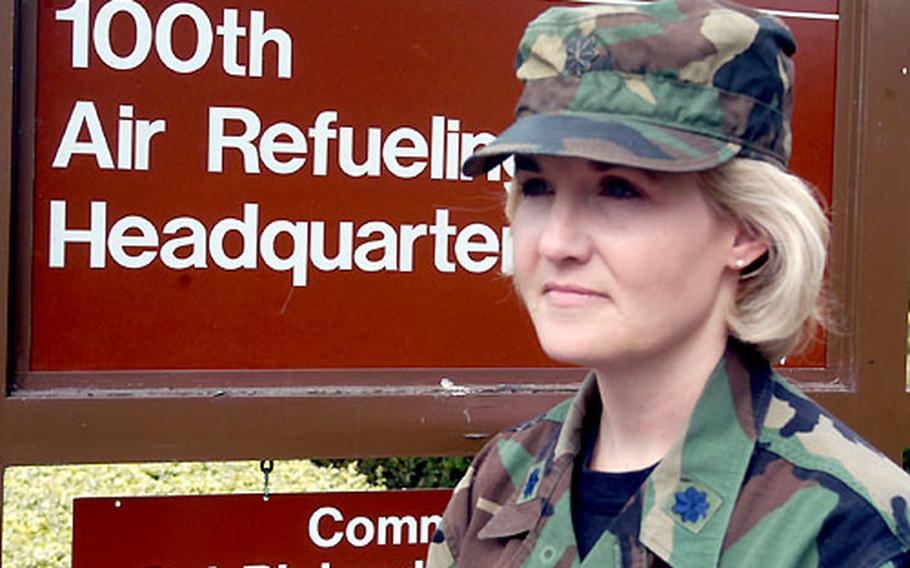 Lt. Col. Penny Bailey, director of staff for the 100th Air Refueling Wing at RAF Mildenhall, England, was at the Pentagon two years ago when it was attacked by terrorists. (Ron Jensen / S&S)

That&#8217;s important to remember as Lt. Col. Penny Bailey tells the tale of Sept. 11, 2001, when an airliner commandeered by madmen slipped from anunblemished sky and was purposely crashed into the Pentagon where she and her husband were working.

If not for the sick child and a mother&#8217;s innate sense of compassion, her story may have taken a much sadder, tragic turn. But in the tragedy of two years ago, there was a more felicitous outcome for the Bailey family.

She is director of staff for the 100th Air Refueling Wing at RAF Mildenhall, England. Her husband, Dr. (Lt. Col.) J.D. Bailey, is a flight surgeon at the base.

Two years ago, she was deputy chief of protocol for the chairman of the Joint Chiefs of Staff. Her husband was a physician at the Pentagon.

As usual, they both left for work that day before their two children at home &#8212; Tori, 8 at the time, and Jim, who was 10 &#8212; awoke. Their older daughter, Kayla, was away nearby at a college in Virginia. Bailey would call the children later to wake them and a friend would drive them to school.

On this day, however, Tori begged out of school, something she was not prone to do. She loved school and Bailey knew her little girl must be quite ill to ask not to go. The mother promised the daughter she would be home at noon, after an important appointment at 9 a.m. The appointment was with a general, and Bailey was showing him around the Pentagon just after his arrival. They were at the Army&#8217;s area of the five-sided building when Bailey suddenly said, &#8220;Sir, I have to get back to my office.&#8221;

Bailey realized she was struck by the sudden desire &#8212; the sudden need &#8212; to call her sick daughter. The two returned to Bailey&#8217;s office, about a quarter of the way around the massive office complex from the Army&#8217;s area.

Her boss, leaning against the wall, said the wall seemed to breathe &#8212; expanding and then contracting.

An airplane had struck the building, slamming into the area where the Army offices are located, the area where Bailey and the visiting general had been when Bailey was overcome by the maternal instinct to check on Tori.

What followed were hours of smoke and confusion and a report that another hijacked plane was on the way. That aircraft, however, would crash in a Pennsylvania field as passengers took matters into their own hands.

There was an effort to move Secretary of Defense Donald H. Rumsfeld and Gen. Richard Myers to a safe location. Myers was deputy chairman to Gen. Henry Shelton, who was out of the country.

Bailey called her daughter, who said she was watching the Cartoon Network. Several people had called her, however, and asked about her parents, said the young girl, who was unaware of events.

Tell them we are all right, Bailey told her, but in fact she had no idea where her husband was.

When Rumsfeld decided to stay at the Pentagon, Bailey went in search of her husband. The center courtyard of the building had been turned into an ad hoc field medical station, but her husband was not there.

Many medical people had gone to the crash site, but it was restricted to medical personnel only. Bailey donned a blue vest emblazoned with the word &#8220;physician.&#8221; She put it on and gained access to the area.

From a distance, she saw her husband. He saw her. They smiled in relief at each other.

It was past 8 p.m. when they both reached home. Their son was there, comforted to see his parents. His 10-year-old mind had imagined the worst. Kayla, a college freshman, had also come home, too shaken and scared to attend classes that day.

Tori, of course, was there. She was all better. The illness that had kept her from school and caused her mother to make an about-face in that Pentagon hallway 12 hours earlier, just ahead of the hijacked jet, had vanished.

Bailey knows she was fortunate.

Now, she hates the approach of this date because it brings up the memories and the images of the fire and the smoke and demolished wall. It reminds her of the 184 people whose families were not as fortunate.

The day&#8217;s events come back frequently, keyed by any mention of the war on terror, which began in the smoke and ashes of that day. She tries to push the memories away, but they come, just the same.

She talks about the day only reluctantly.

But she talks about it because there is a truth there she believes with all her heart. That&#8217;s why it is important to remember that the day started with a sick child, a young girl crazy about school who told her mother that on this day, of all days, she didn&#8217;t feel like going &#8212; a young girl whose mother suddenly wanted to make a call.