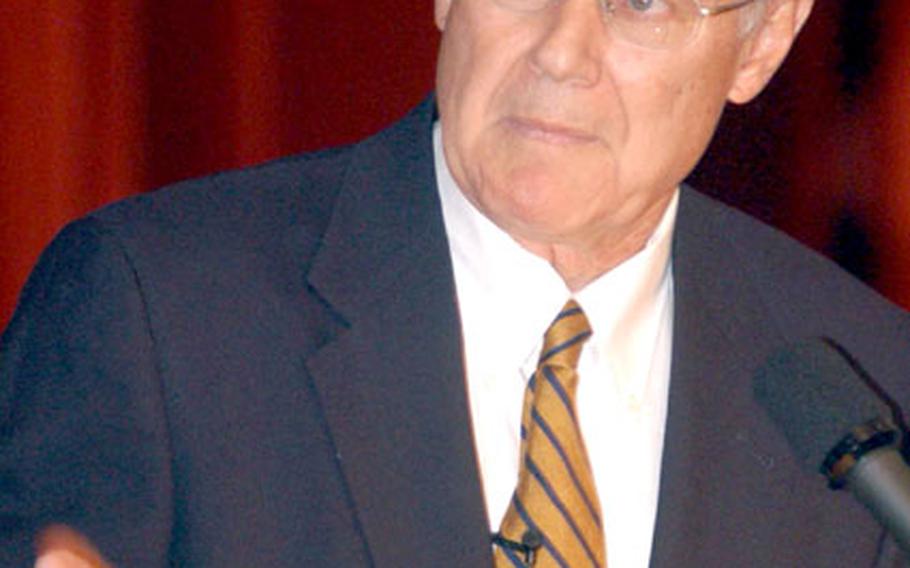 HEIDELBERG, Germany &#8212; The Coveys live in a world where families have lots of children and husbands and wives stay married forever. A world where parents never really discipline children; where all thoughts are positive.

They brought that world to the U.S. Army Land Combat Expo this week, and people loved it.

Motivational speaker Jane and John Covey pulled in capacity audiences each day of the expo, extolling what they say are the seven habits of successful military families.

Their 90-minute seminar Friday, which drew about 150 people, was quite a contrast to the explorations of war-making and combat.

Instead of using force to impose your will on others, the best families discard negative habits and adapt habits of listening to one another instead of dictating. They identify one another&#8217;s best points, dwell on them instead of the negative, and incorporate them into the fabric of the family, the Coveys said.

The Coveys have seven children and 47 grandchildren, and they used their own pitfalls to demonstrate how they changed their behavior: condemning bad behavior and cultivating the best traits.

The key point, they stressed, is that people have the capacity for dramatic and profound change.

And once they realize this, successful families can break bad habits by taking the time to identify and practice core values, such as faith and love, then change habits that make one another unhappy, and their family weak, John Covey said.

Each person must take responsibility for poor behavior and change it, they said. People make deposits and withdrawals in the family bank of encouragement and praise. If children don&#8217;t get that at home, Jane Covey said, they&#8217;ll go elsewhere and may find that encouragement with destructive people, such as drug users.

Critics have accused Stephen Covey, a member of The Church of Jesus Christ of Latter-day Saints, of repackaging Mormon teachings. But in interviews, he&#8217;s stressed the theme of strong families in all religions, and recommends tracts from Christianity, Judaism, Islam and other religions.

Stephen Covey also is vice-chairman of FranklinCovey Co., a diversified retailer that make a variety of professional organizing and time-management product such as the Franklin Planner.

According to Jane and John Covey, the following are essential to fostering a healthy, happy family life: