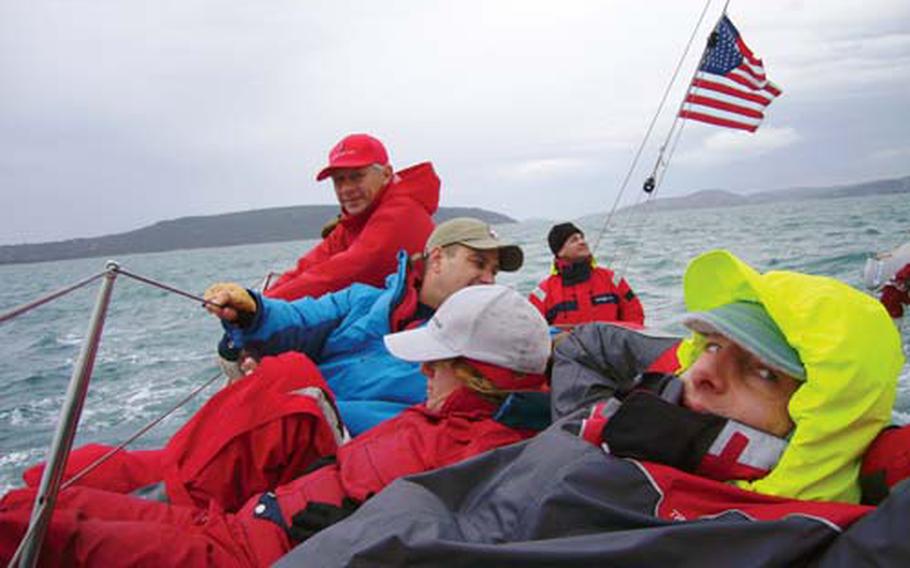 (From back to front) Navy Reservist Lt. Stuart Gold, Jan Chrypinski, Army Capt. Al Eckart, Navy Reservist Lt. Sandra Salvatori and Court Rawson gather on the high side of their vessel to keep it on keel during the Croatian Navy Cup and Christmas Regatta, a 28-nautical mile navigational run off the coast of Croatia. (Courtesy of Ralph Belander)

(From back to front) Navy Reservist Lt. Stuart Gold, Jan Chrypinski, Army Capt. Al Eckart, Navy Reservist Lt. Sandra Salvatori and Court Rawson gather on the high side of their vessel to keep it on keel during the Croatian Navy Cup and Christmas Regatta, a 28-nautical mile navigational run off the coast of Croatia. (Courtesy of Ralph Belander) 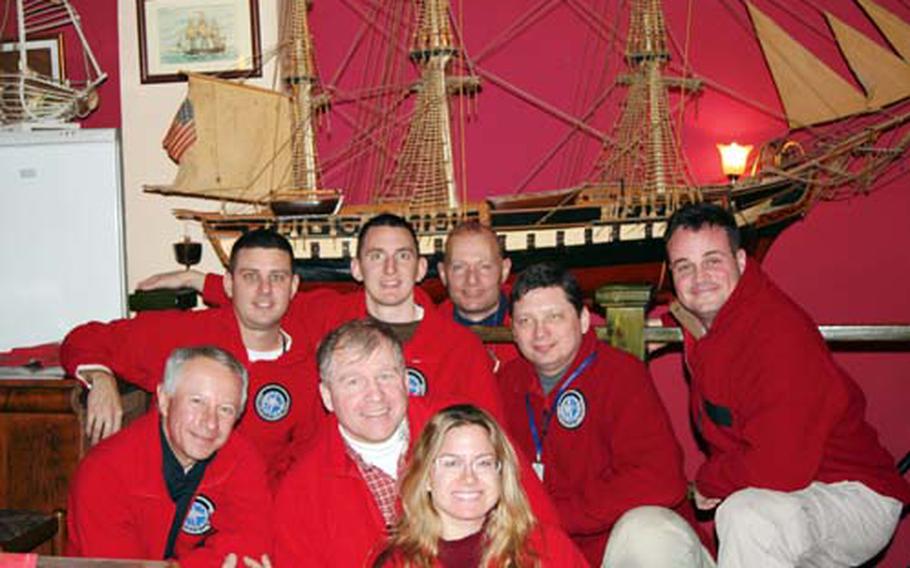 The eight-person crew was assembled in August and practiced only once before the weeklong event, which culminated Dec. 13 in Split, Croatia. And two practice days while in Croatia were cut out because of bad weather.

Considering all the challenges, "We did exceptionally," said Sandra Salvatori, a Navy reservist and civilian U.S. Africa Command employee at the Joint Analysis Center at RAF Molesworth.

"It&#8217;s an instant team that had to be created," she said. "And maybe because we&#8217;re military, we can do that better than other people, but I think its speaks to the team dynamic we had."

Salvatori, a Maryland native and the crew&#8217;s skipper, has sailed all her life. However, several of her shipmates are still learning the sport and were inexperienced in internationally sanctioned races like the Croatian navy&#8217;s premier nautical challenge.

After besting rain and winds up to 25 knots &#8212; with gusts reaching 40 knots &#8212; during most of the main event on Dec. 13, the team was proud albeit haggard when it crossed the finish line, Salvatori said.

"We placed better than we should have for the level of experience we had, and that&#8217;s a testament to the crew," Salvatori said. "The main goal was to have fun, not lose and not get hurt. And we achieved all of those goals. We can be very proud of what we did."

The team placed fifth out of seven military teams in the navy cup &#8212; a series of heats throughout the week &#8212; and 11th of 20 in its class in the regatta, which was open to civilian teams.

Though brought together by happenstance, the team gelled and plans to compete in next year&#8217;s event in Croatia, which along with Albania became the newest members of the North Atlantic Treaty Organization this year.

The team&#8217;s presence was so well received that Rear Adm. Ante Urlic, commander of the Croatian navy, personally invited the team to return in 2009, according to a letter of commendation for the team issued by Robert A. Bradtke, the U.S. ambassador to Croatia.

While the event was a feat of endurance, teamwork and sailing skills, participation by the Molesworth crew &#8212; the first U.S. team to compete in the race since its inception seven years ago &#8212; was also considered a mark of diplomacy.

"The team&#8217;s camaraderie with the Croatian Navy hosts during this event has enhanced military-to-military relations and contributes to continuing strong bilateral relations as well as furthering our mission through improved access to Croatian Navy leadership for my U.S. Naval attach&#233;," Bradtke wrote.