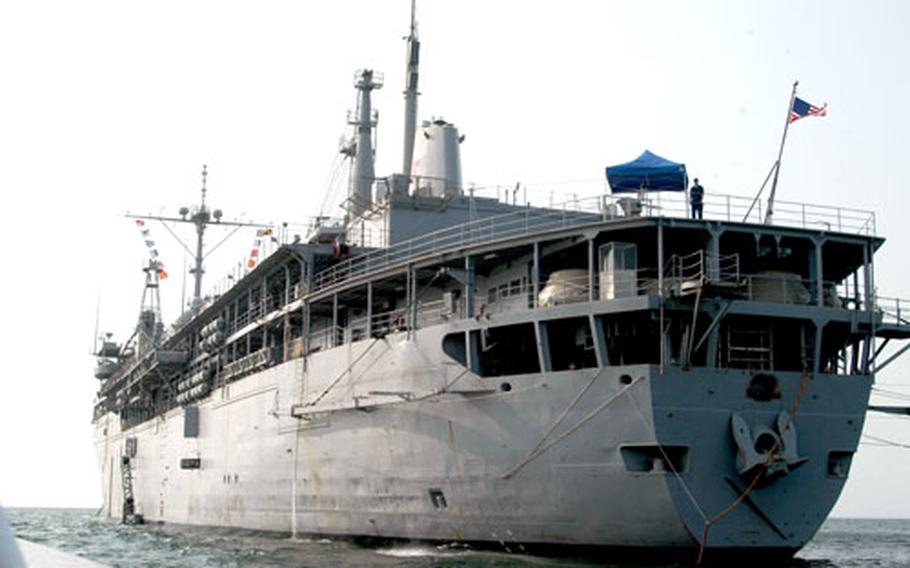 The U.S. Navy submarine tender USS Emory S. Land and its 1,200 sailors are back home in La Maddalena, Italy, after an unprecedented two-month deployment to the Gulf of Guinea.

The Land&#8217;s deployment to Cameroon, Gabon and Ghana included humanitarian missions and military lessons to help the oil-rich West African nations develop their own maritime security to combat problems from smuggling to piracy, officials said.

The Land, one of two submarine tenders remaining in the Navy, docked at its home port of La Maddalena, on the Italian island of Sardinia, on March 24.

&#8220;As they start improving security, it will lead to enhanced regional stability which in turn leads inevitably to economic development. And that economic development promotes democratic thought and a better quality of life,&#8221; Marine Col. Barry Cronin, commander of Task Force 68, said of the long-term effects of the Land&#8217;s mission.

Task Force 68, headquartered in Gaeta, Italy, oversees sailors and Marines who do not belong to ships, submarines or air wings within the 6th Fleet command.

During the deployment, 15 of the Land&#8217;s metal workers and hull technicians instead went to Camp Buehring in northern Kuwait to weld armor plating onto Army vehicles. They returned to La Maddalena on March 9, said Lt. j.g. David Luckett, a 6th Fleet spokesman.

This summer, the Coast Guard will follow on the Land&#8217;s mission by sending the 270-foot cutter USCGC Bear, based in Portsmouth, Va., and a crew of 100, to teach about navigation, search and rescue, and antiterrorism force protection.

U.S. sailors repaired such items as ventilation systems and ship hangar bays and taught African sailors how to do the work themselves, Petty Officer 2nd Class Jesse Clayton, 26, said in a telephone interview.

The hull technician said helping repair 30 adult-size wheelchairs brought to the ship from an orphanage in Cameroon was the most memorable part of the mission.

And while some sailors sampled some humble pie, the soccer matches between Land sailors and local nationals will go a long way toward forging a lasting, positive relationship, said Chaplain (Lt. Cmdr.) Emile Moured, 34.

&#8220;It was something incredibly meaningful to [the local nationals]. Here we are, a superpower, and we&#8217;re struggling to keep the game close. That probably did more for diplomacy than anything else,&#8221; Moured said, chuckling.

The ship&#8217;s crew also tested its own limits on the deployment, commanding officer Capt. Michael Budney said in a written statement. &#8220;This was our biggest challenge. Because this ship is basically designed to go port to port and fix ships, being under way and steaming for 46 days was a real test for the crew.&#8221;