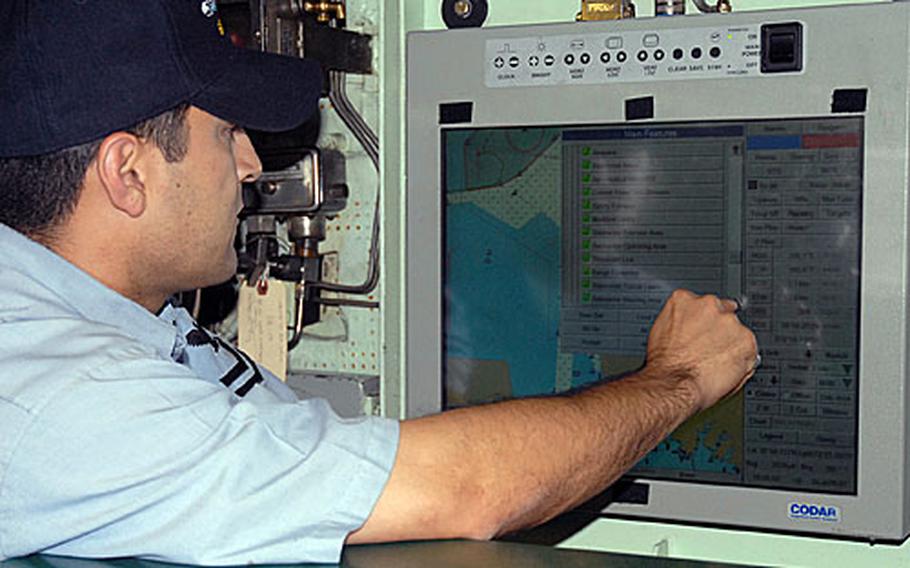 A sailor aboard the USS Oklahoma City familiarizes himself with the Voyage Management System. VMS is a combination of digital charts, constant global positioning system fixes, environmental sensors and electronic command and control to allow the submarine to eliminate many of the constraining aspects of navigation when using paper charts. (Photo Courtesy Kelvin Edwards / U.S. Navy)

Score kudos for computer and video games. While the technology might contribute to the rising obesity of today&#8217;s sedentary youth, it&#8217;s also making for some tech-savvy sailors.

The USS Oklahoma City is the first submarine, and the second vessel in the U.S. Navy, to go completely digital for navigation. It has an electronic system that combines digital charts, global-positioning fixes and environmental sensors &#8212; all of which rid the cramped vessel of mounds of paper charts.

Young sailors are quickly picking up the new skills.

&#8220;I&#8217;m excited about the new technology, and it&#8217;s easy to learn, having grown up in an age where technology is a daily part of our lives,&#8221; said Petty Officer 2nd Class Jeremiah Stymer, 25, a submariner stationed with Command Undersea Surveillance in Naples, Italy.

The digital world offered by the new Voyage Management System will be a new one for submarine navigators, Navy Capt. Mike Brown, force navigator for Submarine Force, said in a statement.

&#8220;In the past, the quartermaster would do all of this work that could take anywhere from 10 minutes or more just to plot our position. By the time you completed that task you would already be 10 minutes beyond that plot. With VMS, it&#8217;s plotting for you as you are moving along, which allows the quartermaster to look ahead more.&#8221;

Beyond its bells and whistles, VMS also will save on space &#8212; a valuable commodity on submarines.

&#8220;It&#8217;ll free up a lot more space, and having an electronic log makes for a lower error rate when preparing charts,&#8221; said Stymer, who worked as a sonar technician for more than five years on the USS Tucson.

Sailors still need to learn and keep up with the old-fashioned skills, he said.

The digital system too will make crews more efficient, Chief Petty Officer Robert Jacques, an electronics technician, said in a statement. &#8220;VMS will reduce man power workload by almost 40 percent, and it will allow for plans to be utilized at a future date or shared with other units in the same ports.&#8221;

The guided missile cruiser USS Cape St. George was the first naval vessel to use the system, and has been navigating paperless since May 2005.

&#8220;It was met with great success, and because of that, we wanted to try it on the submarine force,&#8221; said spokesman Chief Petty Officer Dean Lohmeyer.