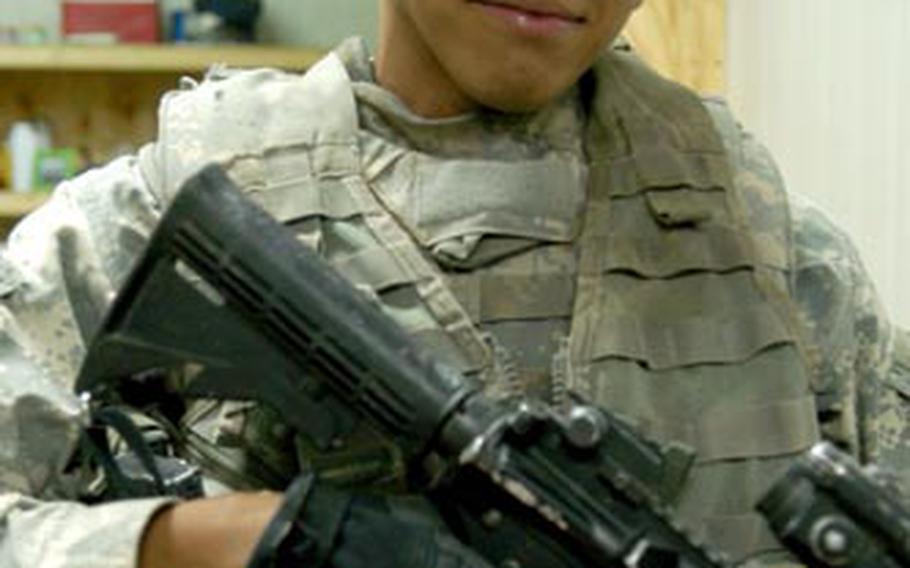 Spc. Jorge Monjaras, a loader with 4th Infantry Division’s Company D, 1st Battalion, 8th Infantry Regiment, had a makeshift grenade thrown at him during a patrol late last month. The grenade fell apart and didn&#39;t explode except for the blasting cap. The small blast hit his back and burned a fist-sized hole into his body armor vest but left him without a scratch. (Sean Kimmons / S&S)

MOSUL, Iraq &#8212; As Spc. Jorge Monjaras peered out the open hatch of an Abrams tank last month, he saw a young insurgent dart out of a crowd and lob a makeshift grenade. A small blast hit his back and burned a fist-sized hole into his body armor vest but left him without a scratch.

The explosion was only the blasting cap. The main explosive, a 60 mm mortar round, landed inside his hatch and moved freely at his feet.

It wasn&#8217;t until the next day when he prepped the tank for a different mission that he realized how lucky he was. To his surprise, the mortar round sat where he had stood previously.

The blasting cap and mortar, tied together with plastic cable, became unraveled when the insurgent hurled it at him.

"I was pretty damn lucky," said Monjaras, a loader with 4th Infantry Division&#8217;s Company D, 1st Battalion, 8th Infantry Regiment. "If it stayed attached I&#8217;d probably be split in half."

Hand grenades have been an ongoing tactic used by insurgents in this city as roadside bombs prove ineffective on Mine Resistant Ambush Protected and other types of vehicles. Insurgents are now bolder than usual, stepping up these attacks around the holy month of Ramadan, soldiers say.

Hours before his close call, Monjaras, 22, of Houston, said another homemade grenade bounced off his tank and exploded during a patrol of the same rough neighborhood, Karama, in eastern Mosul.

A few days later, two U.S. soldiers in the battalion were injured when RKG3 armored-piercing grenades were thrown at their vehicle. These types of grenades have been used to attack U.S. soldiers in Iraq for the last few years, causing much devastation.

The next day, Iraqi teenagers chucked improvised grenades at soldiers outside their vehicles. Then on Monday, a third soldier in the battalion was injured when a hand grenade exploded near him.

"It&#8217;s certainly something we&#8217;re looking for," Capt. Alexander Rasmussen, commander of the battalion&#8217;s Company D, said of possible grenade attacks. He added that metal boxes filled with homemade explosive had also been tossed at vehicles.

Following the attack on Monjaras&#8217; tank, a new rule filtered down to 1st Battalion units to keep all hatches closed during patrols.

Insurgents tend to hide in crowds and when a convoy approaches, they pop out and throw the explosives.

"They know that we won&#8217;t shoot at a crowd," said Rasmussen, who sees the latest attacks as evidence of the enemies&#8217; desperation since his battalion has had recent success in its sector.

Monjaras said the insurgent, perhaps about 14 years old, who targeted him waited for his tank to pass an alley before he attacked. He then used the narrow streets to escape the soldiers.