Observers bow their heads during the opening prayer at the Veterans Day observance on Friday at Patch Barracks. (Charlie Coon / S&S) 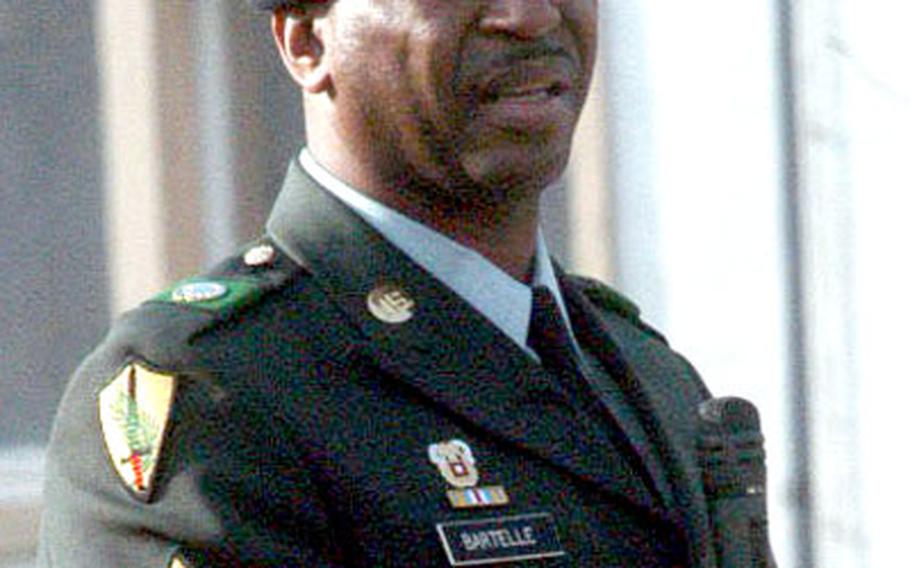 Frank De Ciccio, center, and James W. Johnson, right, take donations in exchange for Buddy Poppies on Friday outside the commissary at Patch Barracks. The donations are distributed to needy veterans by the Veterans of Foreign Wars. (Charlie Coon / S&S)

STUTTGART, Germany &#8212; The regulars were there. Old soldiers who show up for these things.

So were a few current troops, a handful of families and some Junior ROTC teens from Patch High School. About 70 people in all.

The Veterans Day observance at Patch Barracks took 25 minutes. The old vets sounded a little disheartened that the crowd was not bigger.

At the Patch ceremony, the traditional POW-MIA table was set: a single empty chair, a red rose symbolizing the bloodshed, a slice of lemon on a plate for the POW&#8217;s bitter fate, salt sprinkled as a reminder of fallen tears, an inverted drinking glass that would not be toasted.

Two wreaths of flowers were placed. After the weekend, they&#8217;ll be placed at a veteran&#8217;s grave. Taps was played for those who had died. A few prayers were said and speeches made, including one by U.S. European Command Sgt. Maj. Michael Bartelle.

The old soldiers knew that other events marking the day were taking place. Some units were doing their own thing, one suggested. The Patch event just happened to be small, they said, but still heartfelt.

&#8220;To me, [Veterans Day] is one of the biggest things there is,&#8221; said William Wiessner, a veteran of World War II, and the Korean and Vietnam wars.

Wiessner recalled being part of the post-World War II occupation in Stuttgart. At a social event in 1947, he was introduced to a German woman who would teach him to dance.

Jerry Stottlemyer, another vet, said he was spit on after returning from Vietnam.

Over at the commissary, veterans were giving out &#8220;Buddy Poppies&#8221; in exchange for donations to help veterans in need. Business was steady as shoppers buzzed in and out of the store, stocking up for the holiday weekend.

Johnson also served in Vietnam and looked back with a sour memory on the anti-war demonstrations. He said he wanted to go to Washington and get in a fight with the demonstrators, &#8220;and kill them. I really did.&#8221;